Kansas guard Devonte' Graham (4) heads in for a bucket during the first half, Friday, March 23, 2018 at CenturyLink Center in Omaha, Neb.

Omaha, Neb. — After delivering a 1-of-7 shooting performance in last weekend's second-round victory over Seton Hall, the expectation was that Kansas senior Devonte' Graham would come out in Friday's Sweet 16 game against Clemson ready to bounce back big time.

And then Graham opened Friday's 80-76 KU victory over Clemson by missing the first five shots he took and finishing 4 of 12 for the game for 16 points — six coming at the free-throw line — in 35 minutes.

“He obviously hasn't shot the ball well in the tournament yet,” said Kansas coach Bill Self of his point guard, who is 14 of 43 (33 percent) from the floor and 5 of 17 from 3-point range (29 percent) in KU's three NCAA Tournament victories. “He made two 3s the second half and a little floater, but we haven't seen the real Devonte' yet, in my opinion.”

Part of the reason for that on Friday was foul trouble. Sure, Graham struggled to find his shot early on — his first bucket of the night came on a driving layup with 5:20 to play — but foul trouble also kept him from finding any kind of second-half rhythm after the first few minutes.

It was in that stretch when Graham buried one of those two 3-pointers, a dagger of sorts from the corner that put Kansas up 49-29. His only other triple came with around nine minutes remaining, and his reaction to that make, from just in front of the KU bench, was one of relief rather than his typical overflowing personality.

Regardless, all of it led Graham to this point, where he gets one final crack at breaking through to the Final Four on Sunday.

Asked how much losses to Villanova and Oregon in the last two Elite Eights would weigh on his mind during the next 24-48 hours, Graham, as always, delivered brutal honesty.

“I think about it all the time,” Graham said. “I just told the guys in the locker room, ‘I've been here the last two years and this year we have to get over that hump.’” 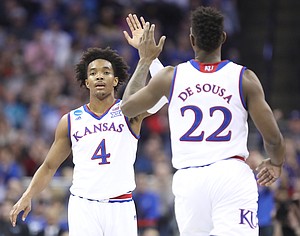 Asked how his injured left knee felt after delivering his sixth double-double of the season in Friday's victory over Clemson, sophomore center Udoka Azubuike provided a fairly detailed answer.

“It definitely felt better,” said Azubuike, who returned to his spot in the starting lineup.

When asked how he measured the amount of improvement he felt in the left knee, which suffered a Grade 1 sprain of the MCL on March 6, Azubuike pointed to getting up and down the floor.

“Pretty much my running,” he said. “When I'm running, I kind of feel it. It just keeps moving, a little more movement in my knee. But today, it felt more stable and I felt good out there.”

That was big news for Kansas because the Tigers clearly had no one capable of matching up with Azubuike's size.

“He makes everything easier for us,” Graham said of Azubuike. “You know, we get to play off of him. We always say throw the ball inside, play around Dok because it's hard to guard him inside and he can get angles easily.”

Added sophomore guard Malik Newman: “When we're able to throw it in and the defense collapses on him, he is able to kick it out and find an open shooter. It just opens up the whole game for us.” 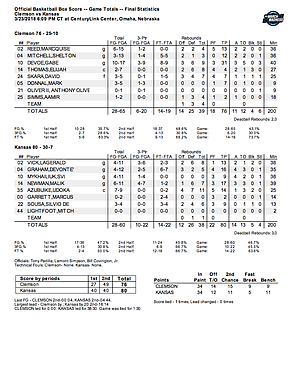 Late in Friday's first half, Clemson's Elijah Thomas was hit with a Flagrant 1 foul after getting mixed up with KU freshman Silvio De Sousa.

At first, it appeared like the official would just warn Thomas to clean things up. But after Self called timeout, things changed.

“I called timeout to go two-for-one and I told (the ref), 'My guy got hit in the head,'” Self recalled. “They were mauling each other. But there was a swing there. I saw it. Nobody else saw it on my bench. I'm glad they went to look at it. I told (the ref) and he said, 'No, no, no, that was just two guys tangled up.' And I said, 'No, he hit him in the head.' Fortunately, they looked at it and Silvio made two free throws so it turned out to be pretty big.”

KU's Sunday showdown with No. 2 seed Duke will mark the eighth trip to the regional finals in Self's 15 season at Kansas.

Self's Jayhawks are 2-5 in those previous seven appearances, including losses in each of the last two seasons.

Speaking before Duke’s victory over Syracuse in Friday’s other Sweet 16 game had gone final, Self said the Jayhawks already had one early advantage in Sunday's Elite Eight matchup.

“Whoever we're playing, we know we're going to have to shoot 30 3s because they're going to play zone,” Self said. “It'll be a fun game. And we know, whoever we play, we'll probably see a zone so we know what to work on (Saturday).”

Both Duke and Syracuse have played zone defense almost exclusively during the last couple of months, with Syracuse having done it for nearly all of Jim Boeheim's 42-year career.

Kansas has seen its share of zone this season and had varying degrees of success. 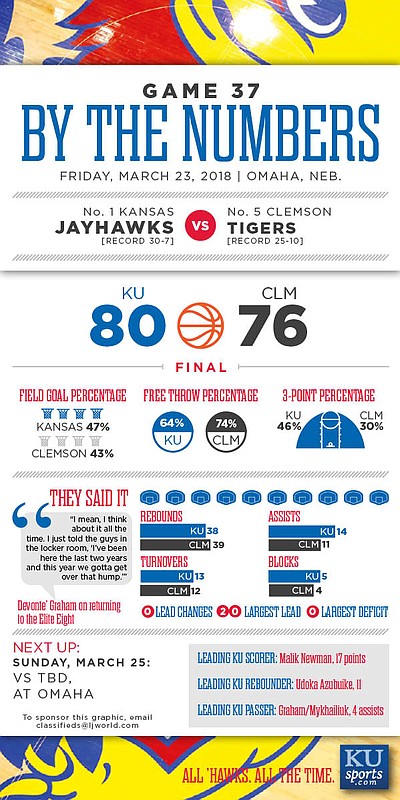 Devonte is due for a big game; I think it’s coming on Sunday!

It seems like he isn’t bringing the ball up the court as much as before. Why is that?

By not bringing the ball up court, it relieves some of the stress of the game from him. Let's him have a little time to rest - a little.

Sometimes, it might also be the a matter of matchups. Say if Svi is being guarded by a 4 vs. a g, it would be a more favorable matchup for KU.

We need some of this against Marvin Bagley!

Devonte is pushing the ball to the rim with his shooting hand rather than using his arms and legs together in rhythm. Usually it's tired legs that causes great shooters to get off this way. Here's hoping he recovers by Sunday.

Graham could help a lot by getting Gracie Allen in foul trouble.

if the Oregon Devonte shows up, no way we win. Devonte must score 25, Malik must score 22 and Svi must score 20+. The rest of the team has to score at least 27.

I mean, leave it on the court because there is no tomorrow,

Before putting the blame on Graham, remember that the entire frontcourt only scored 9 points with 3 rebounds. Coleby and Bragg never showed up leaving Lucas as the only frontcourt player to score a point and grab a rebound.

Most of the team played average or played their average, but Devonte was way off his game. Look, everyone has a bad day or two, and I wouldn't hang the loss on Devonte, but had he also been at his average the result may have been different. That's why it's so important that when one guy is off someone else steps up, kind of what Newman has done over the past several games. If you want to win, when someone is not having a good night you have to have someone have an exceptional night.

Maybe, but Dorsey's 27 points didn't help. Neither did KU's frontcourt scoring a total of 9 points or (Bragg never even played) KU shooting only 35% to Oregon's 50.1%. Or hitting only 5 of 25 from the 3. There is A LOT of blame to spread around.

Joe just an observation on the video you attached. It was against Texas Southern. I think the competition against Duke might be slightly upgraded.

The Big XII POY Devonte needs to show up for sure, but so does the senior assassin Svi, and the resurging Vick, along with the playoff version of Newman. If Dok can play the same minutes but without the foul issues, he and Silvio will be just fine, they both get a little better with each game. Silvio is our bench points and best rebounder per minute played.

I know Coach isn't going to make changes now, but Duke presents its own challenges with size and speed, it would be nice if we could throw them a change up or a slider once and awhile during the game.

I wouldn't forget Lightfoot. He has proven himself many times this year and both Udoka and Silvio need him to play between 15- 20 mpg.

I didn't forget Mitch, not sure why he was in the game for such a short amount of time last night. On the season, Mitch has almost 4 times the minutes Silvio has, yet he has only about 2 times the number of rebounds. He also has only about 2 times the field goals made, again with 4 times the minutes played. Free Throws is almost the same percentage made. Where Mitch has done better is in blocks. Unless the game goes into overtime, I don't see how Mitch can get 15-20 minutes a game. Dok is going to get 25 or so of the 40 if he's not in foul trouble, that only leaves 15 for the other two guys to share.

I'd also like to see Garrett show up with one of his better games, it wasn't last night. Most of what we see from Marcus is his defense. Maybe he can stuff "Jack the Tripper" Allen.

Way to go Coach Self on convincing the refs of the flagrant foul. It was obvious, and apparently he was the only one who saw it, other than Silvio who experienced it. Typical Hall of Fame move!

each team we play now is going to be that much tougher than the one before. Duke brings a NC atmosphere to this one. Wish we had K-State's opponent. But we need to go through the best so Duke it is.

Although this may not be the Duke team we all love to hate, it has to be the best number 2 seed in the tournament. And I'll just bet the pundits (fools that they are), have Duke penciled in as the NC, so as far as their concerned they're the best team left in the field. Of course they also had Kentucky in the final four just a couple of days ago.

With eight teams left in the tournament, what's Kansas, number 10 to win it all :) We haven't gotten any respect all tournament long, don't know why it should change now.

Loyola just happens to be a really good team. One of those that are greater than the sum of their parts and a coach who has his team peaking at exactly the right time.

But yeah, I would rather play Loyola Chicago than Duke.