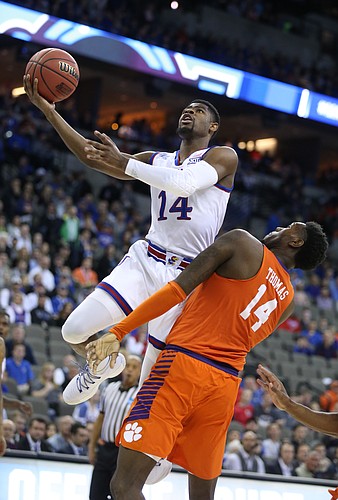 Kansas guard Malik Newman (14) swoops in for a bucket against Clemson forward Elijah Thomas (14) during the first half, Friday, March 23, 2018 at CenturyLink Center in Omaha, Neb. by Nick Krug

KU shot it well enough — 47 percent overall and 46 percent from 3-point range — but the Jayhawks struggled to take care of the ball when it counted most and also shot just 14-of-22 from the free throw line. They're going to have to do better in both areas on Sunday against Duke and a lot of the talk in the locker room after Friday's victory was about how this team still has yet to play its best game of the tournament.

The Jayhawks, for the most part, did a solid job of making things difficult for Clemson, using their switching style of perimeter D to chase the Tigers around and contest the jump shots Clemson did get. That all changed in the second half, when the Jayhawks got weak on the glass and allowed the Tigers to tally 14 offensive boards, while shooting 48.6 percent from the floor in the second half. Clemson coughed it up a bunch early on, but finished with just 12 turnovers for the game, a sign that KU's defense took a step back when the Jayhawks built that big lead.

Udoka Azubuike and Silvio De Sousa were stars in this one. The duo combined for 23 points and 17 rebounds and gave Clemson's front line fits all night. It wasn't the most memorable night for sophomore forward Mitch Lightfoot, but he's tough, mentally and physically, and will be able to flush the game and try to help KU get by Duke on Sunday. Azubuike and De Sousa, however, will carry huge importance in that one, much like they did in this one.

Even though KU's guards were almost exclusively responsible for letting that huge lead slip away, they also were a huge part of the reason KU got up that big in the first place. So you have to consider both sides of the equation when looking back at this one and it seems to me that the Kansas backcourt did far more good than bad in Friday's victory. The lone exception was Svi Mykhailiuk, who shot 4-of-11, 1-of-4 from 3-point range and did not grab a single rebound. His veteran presence made up for some of those numbers, but he'll need to shoot the ball better on Sunday.

De Sousa was solid and Lightfoot was off, but Marcus Garrett also had an uncharacteristically quiet game against Clemson. It wasn't that he was bad, just that he did not impact the game nearly as much as he normally does. Garrett missed both shots he attempted, two of the four free throws he shot and did not grab a rebound or dish an assist and picked up just one steal yet three fouls in 14 minutes.

The O stalled when Graham got in foul trouble. I think some of that was by design - taking the air out to limit the number of possessions. While there were things that weren't good, it could have been much worse if there would have been a half-dozen more possessions.