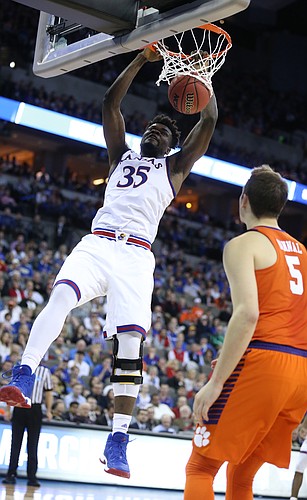 1 - Udoka Azubuike: Battled foul trouble and eventually fouled out, but made the most of his 25 minutes by dominating inside with dunks and rebounds. He also did a great job of passing out of the post. Finished with 15 points, 11 rebounds and two blocked shots.

4 - Devonte’ Graham: Telegraphed a bad pass that was intercepted and compounded mistake with a foul that enabled Gabe DeVoe to complete a 3-point play that cut KU’s lead to 15 points, an atypical, bang-bang stretch for the extremely smart player. Foul trouble limited him to 34 minutes. Even on an off night, he still contributed 16 points, five rebounds and four assists and made 2 of 5 3-pointers and 6 of 7 free throws.

5 - Svi Mykhailiuk: Scored 7 of his 9 points in the first half. Did not have a rebound but did have four assists and a steal.

6 - Silvio De Sousa: Put-back on which shot-clock buzzer sounded as ball kissed off the glass was huge, putting Clemson behind, 62-42, ensuring Kansas gained ground when Devonte’ Graham was on bench with three fouls. Was out of position at times on both ends but he’s so active that he makes up for it with positive plays. Produced nine points and six rebounds in 13 minutes.

7 - Marcus Garrett: Made 2 of 4 free throws, missed both shots from the field and had a steal in 14 minutes. 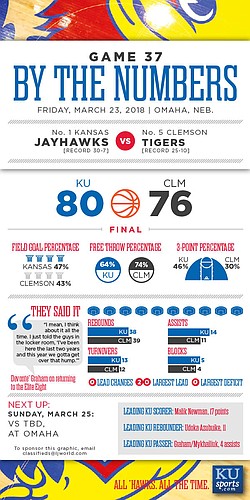 I'm thinking Silvio deserves to be ahead of Svi. Not a horrible night for him, but he certainly shouldn't have a goose egg for R's.

It would seem that Duke will be another team where we will need a strong showing from Silvio, and Mitch will be over-matched. Hopefully, Coach can settle into a nice rhythm of subbing for Dok more frequently, and keeping him a little less winded.