Tom Keegan: Udoka Azubuike lifts up the Jayhawks in win over Kentucky

Kansas center Udoka Azubuike (35) defends against a shot from Kentucky guard Hamidou Diallo (3) during the first half on Tuesday, Nov. 14, 2017 at United Center.

That’s it as far as front-court players go for Kansas unless and until athletic department administrators are satisfied that a “clearer financial picture specific to the vehicle,” freshman Billy Preston was driving in a one-car accident Saturday morning does not impair the talented freshman forward’s eligibility.

Ideally for Kansas, Lightfoot at this stage of his career would be an extra body, extra fouls. Ideally, as a sophomore he’s not a player you want to put in a game against long and quick Kentucky in Tuesday night’s second game of a Champions Classic doubleheader, although he did hustle his way to a steal with 2:53 left.

Kansas needed a high volume of minutes from Azubuike, the inexperienced sophomore center from Nigeria. He needed to stay out of foul trouble, get up and down the court with sleeker teammates, make his presence felt defensively, throw his weight around posting up to make himself available for easy baskets, hit the boards at both ends. 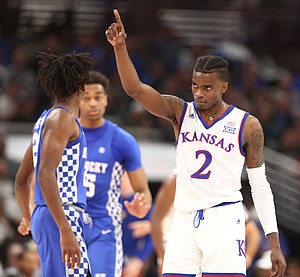 Azubuike was far from perfect, showed how raw a player he still is in many ways, sometimes grew frustrated with players at times when he didn’t realize he was the one responsible for a play breaking down, but the big man deserves a big hand. He willed his body through a career-high 34 minutes and helped Kansas to defeat Kentucky, 65-61, in a game it couldn’t have stayed in without him.

He totaled 13 points, shot 5 for 5 from the field, had 5 of 8 rebounds off the offensive glass and blocked two shots. He’s tough to watch at the free-throw line and made just 3 of 8, but he’ll keep working at it.

When Azubuike sat, Kansas was outscored by six points. 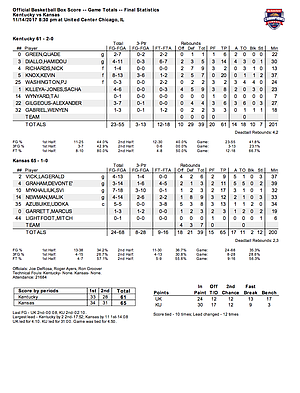 His highlight play came when senior guard Devonte’ Graham set him up for an uncontested slam with a perfect lob on the left side of the hoop, a play that put Kansas up 51-45 with 9:11 left and drew a big roar from the Kansas partisans, and there were many, in the capacity United Center crowd.

Kansas coach Bill Self used the media timeouts at four-minute intervals to give Udoka as much rest as he could while maximizing his minutes by taking him out in advance of the breaks, and late in the first half, even through the break.

Self managed to squeeze 17 first-half minutes out his lone true big man.

When Azubuike sat, Kentucky made his absence felt, immediately getting the ball into the hands of his man and attacking.

Azubuike, when fresh, runs the floor remarkably well for a 7-foot, 280-pound man. He did some things well early, turning terrific post feeds from Lagerald Vick, Graham and Svi Mykhailiuk into seven points. Udoka snagged four early offensive rebounds, but then as fatigue consumed him in the latter stage of the first half, he stopped trying to post up, an art he doesn’t quite have down yet, stood straight and was easily pushed out of the paint. He did what he could until his body wouldn’t let him. He needs help and this wasn’t the right matchup for Lightfoot.

Udoka didn’t pick up his first foul until 2:14 remained in the first half.

Self’s options: 1.) Leave him in the game and hope he finishes the half without picking up a second foul. 2.) Take him out, leaving him four fouls of breathing room in the second half and run the risk of Kentucky successfully targeting Lightfoot. 3.) Bring Svi back in to play the rest of the half with two fouls.

Self left him in and Udoka huffed and puffed the rest of the half, but he didn’t foul. He finished the night with three fouls and should be proud of his effort in so many areas. 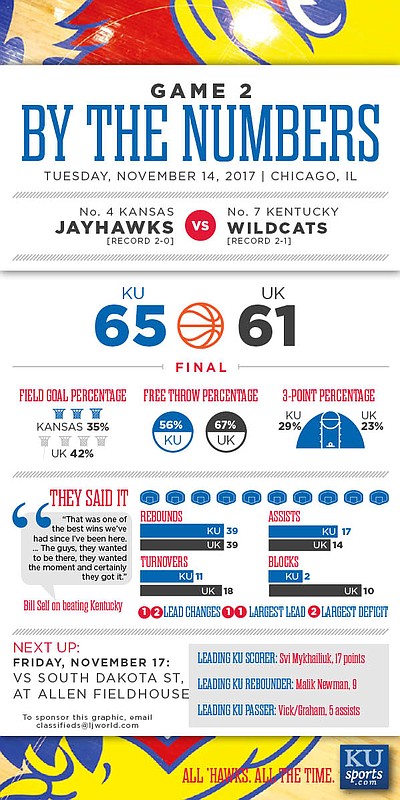 While our guards did have several really nice entry passes to him, it would have been nice to see them work it into him a little more. Thought he played pretty good on the defensive end.

I was thinking the same thing too. - -Only 5 shot attempts the entire game. - -Kentucky had no answer for him, feed the Beast. We have to make more of an attempt to get him the ball inside. - As was mentioned countless times our shot selection at times wasn't the best -got to know when it is a good shot not a couple of passes and then jack it up. - I'm sure they will do better - -Big win all things considered

I thought UK's length made it difficult to get the ball into the post where our guy could reach it without UK stealing it or deflecting it. Those long, long reaches played havoc with our passes into the paint.

For his first major test this year, Dok performed well. He committed only three fouls despite playing "extra" minutes. Needs to improve his free throw shots or else, there will be a lot of "hack a Shaq"!

Indeed. Notice he was not on the floor in the final 10 seconds or so; Self did not want Kentucky putting him at the foul line.

Too many rushed shots from the 3-point line. Feed the beast.

A game or two ago Udoka hit free throws very well. What I remember him doing is taking the ball, bouncing it once or twice and immediately shooting it. He didn't take time to think about it. Last night it seemed he was taking too much time. Maybe if he went back to shooting free throws more quickly he would hit more of them. Or shoot them underhanded like Wilt did. Or, Rick Barry. Is that right? Nothing wrong with that if it works.

Keegan... is something missing from the following paragraph? I'd like to understand whether you are saying the Preston situation does not potentially impair his eligibility or are you saying we won't know that until the investigation is complete? My guess is the latter but I have trouble interpreting this sentence. Was a word or two left out? Thanks.

"That’s it as far as front-court players go for Kansas unless and until athletic department administrators are satisfied that a “clearer financial picture specific to the vehicle,” freshman Billy Preston was driving in a one-car accident Saturday morning does not impair the talented freshman forward’s eligibility."

What Keegs is saying is: (clearer financial picture specific to the vehicle Billy Preston was driving, does not impair the freshman forward's eligibility.)

It's not easy to read, but the meaning is there.

Nothing good happens after midnight!!

Thanks for the reply. As I reread it after several hours it does make some sense. As you said, it's just not easy to read. Thanks.

I hope the interpretation is not that he was driving a vehicle that may have been "gifted" to him.

Good job, Udoka! Not bad for someone who a couple of posters said a few weeks ago "has no skills." They know who they are, but they will remain nameless to avoid embarrassing them further.