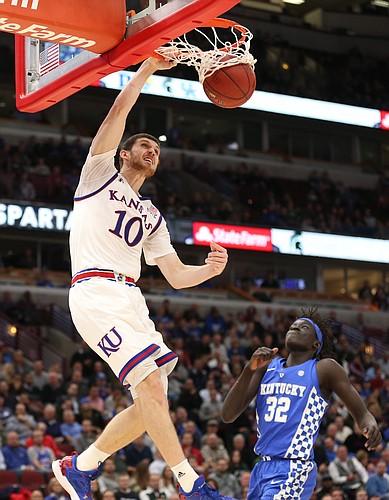 Kansas guard Sviatoslav Mykhailiuk (10) delivers a breakaway dunk before Kentucky forward Wenyen Gabriel (32) during the second half on Tuesday, Nov. 14, 2017 at United Center. by Nick Krug

1 - Svi Mykhailiuk: Threw some nice post feeds to the big man, had three assists, turned it over just once and led team with 17 points and a steal. Took a bad shot late that was way short but in general most of his aggressiveness was productive.

2 - Udoka Azubuike: With Billy Preston out of the lineup, Jayhawks needed the big man to stay out of foul trouble and play big minutes. He gave them what they needed and played a career-high 34 minutes with one first-half foul and three for the night. Made all five of his shots and just 3 of 8 free throws. Blocked two shots and was missed when he rested. Kentucky outscored KU by six points with Udoka on the bench and held a 10-point advantage with him on the floor.

3 - Lagerald Vick: Threw the pass of the night, hitting Svi on a fly pattern for a huge second-half breakaway dunk. Did a nice job of feeding the post and started the game off doing a lot of things well, but couldn't get his shots to drop as the game wore on. He made just 4 of 13 shots and 1 or 4 3-pointers, but did a nice job on the boards, 4 of 6 coming off the offensive glass and had five assists and just one turnover to go with three steals. Still needs to be more attentive about running at 3-point shooters, although better at that than in the past.

4 - Malik Newman: Drove into too many blocked shots when it wasn't always the best play, shot just 4 of 14, but also had nine boards and three steals. Finished strong, hitting a 3-pointer with 2:10 left and then grabbing a defensive rebound with 20 seconds left and a two-point lead. Stretched the lead to four points by making both free throws with 17 seconds remaining.

5 - Devonte' Graham: Forced it a little offensively when team couldn't get anything going and as a result had five turnovers to go with five assists. Made just 3 or 14 shots and 1 of 6 3-pointers. Made 4 of 5 free throws, including both with seven seconds remaining for the game's final points.

6 - Marcus Garrett: Freshman hit a 3-pointer to put Kansas up two with 15:05 left and contributed three points, an assist (two turnovers) and two steals to the victory.

7 - Mitch Lightfoot: Tough matchup at this stage of his career. Kentucky made his man focal point of offense when he was on floor for six minutes. Went scoreless with one foul but did pick up key steal with 2:53 left.