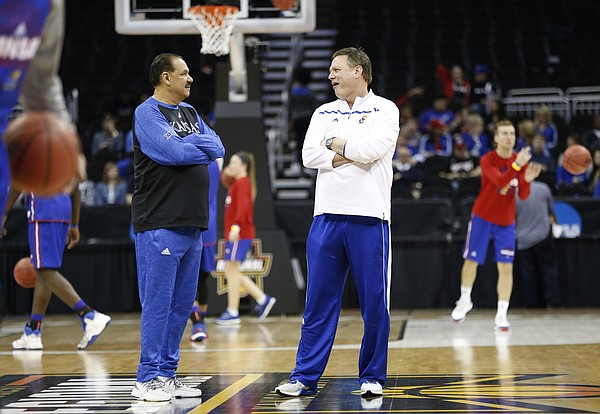 Kansas head coach Bill Self, right, and assistant Kurtis Townsend chat at half court during a day of practices and press conferences prior to a March 2017 KU game at Sprint Center in Kansas City, Mo. by Nick Krug

On the surface, today’s match-up between top-seeded Kansas (30-4) and No. 4 seed Purdue (27-7) in the Midwest Regional semifinals at Kansas City’s Sprint Center seems like a clash between two completely different teams.

On paper, however, these two teams appear much more similar than many are saying.

From both scoring in the 80s and shooting similar percentages all over the floor to impressive defensive numbers and closer-than-expected rebounding totals, the Jayhawks and Boilermakers have at least as many things in common as they do differences.

To take things a step farther, KU coach Bill Self has stressed throughout the week that even though the talk has been about Purdue’s big front line — and understandably so — the two teams even play similar-looking lineups for a good chunk of the time.

“They’re not a big time shot-blocking team,” said Self, whose team actually blocks more shots per game than Matt Painter’s squad. “They’re a wall-up team. What gets lost a lot is Purdue plays, a majority of the time, the same way we do, with one big and four guards.... There’s more similarities in how the game will start than what a lot of people think.”

With that in mind, let’s take a look at some of the numbers.