Kansas guard Frank Mason III (0) puts up a three pointer during a day of practices and press conferences prior to Thursday's game at Sprint Center in Kansas City, Mo.

Kansas City, Mo. — One stands 6-foot-9, weighs 250 pounds and practices with a full sweat suit under his shorts and jersey. The other checks in at 5-foot-11, 190 pounds and doesn’t look quite as imposing but plays that way.

Both are finalists for several national player of the year awards and each will play a huge role in determining which team wins tonight’s Sweet 16 showdown between top-seeded Kansas (30-4) and fourth-seeded Purdue (27-7), set for approximately 8:39 p.m. at Sprint Center

While the two superstars won’t spend much, if any, time guarding each other and probably won’t even be in the same areas on the court all that often, the matchup between Purdue big man Caleb Swanigan and Kansas point guard Frank Mason III provides the perfect trailer for tonight’s clash.

In a world of win-or-go-home basketball, one monster big man and one lights-out lead guard will look to navigate contrasting styles and opposite strengths through the Sweet 16 and into Saturday’s Elite Eight. 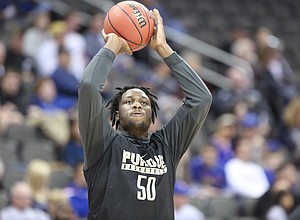 “As far as me and Swanigan, it’s not about me and him,” said Mason shortly before Wednesday’s open practice at Sprint Center, which drew a couple thousand KU fans. “That’s not a matchup. It’s Kansas versus Purdue. So I’m just going to get out there and do whatever I can do to help my team be successful.”

Asked if he could share his strategy for handling a Purdue team that features Swanigan and 7-foot-2 center Isaac Haas as formidable forces, Kansas coach Bill Self didn’t blink but did offer one hint.

“I’m not gonna tell you that,” said Self. “Geez. I’ll tell you, Frank won’t guard Haas. He may want to, but that’s about the only thing I’ll say.”

While it seems obvious that KU’s 5-11 heartbeat won’t be asked to guard the biggest player in the game — Self on Tuesday likened Haas to Ivan Drago from the movie "Rocky IV" — there’s a feeling in both locker rooms that a big performance from an unexpected place could prove to be huge in this one.

“It’s definitely going to come down to that,” said junior guard Devonté Graham. “Somebody off the bench that comes in like last game with Dwight (Coleby). We’re definitely going to still need that this game. ... We’ve got plenty of guys that can do it, and we’ve got that confidence in everybody to come in and be ready to play.”

While the Jayhawks have been led all season by their terrific trio of guards, their season would not have been what it was without these X-factor type of performances, which saved them in some games and enhanced others. 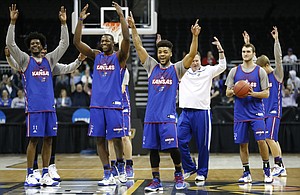 Josh Jackson, KU’s second leading scorer who even went as far as to call himself an X-factor, described the term as a player who can do a number of different things on the court, but does not always execute all of them.

“I think every guy on our team is an X-factor,” Jackson said. “We feel like we can always count on Frank and Devonté, but we look at a couple other guys on our team and we ask, ‘What kind of game are they going to have?’”

Sophomore guard Lagerald Vick, as good a candidate as any for X-factor status, agreed with Jackson.

Asked if being dubbed an X-factor was an insult, Vick sat back, adjusted his furled brow and said, “No, not at all. If you’re an X-factor, it means you’re a factor.”

Most of the talk Wednesday centered on the matchup of Purdue’s big front line against Kansas’ four-guard lineup, which would make Bragg, Coleby and senior forward Landen Lucas the leading candidates to become KU’s unsung hero tonight. Self acknowledged that his team’s success against Purdue’s size — especially Swanigan — will be key.

“He’s a challenge all the way around no matter how you choose to guard him,” Self said. “If you double him, he’s got over 100 assists. He’s a great passer. If they isolate him one-on-one, he’s probably (the best) low-post scorer in college basketball. So he’s definitely worthy of all his postseason recognition. He’s had a great year.”

Both the Boilermakers and Jayhawks will tell you, though, that this Purdue team, which has lost to just one team since Jan. 30 — Michigan on Feb. 25 and again in the Big Ten Tournament — is about much more than Swanigan and his 19 points, 13 rebounds and 3 assists per game averages.

Regardless of what strategy they use or which style wins out, Jackson said the Jayhawks were happy riding their star into the biggest game of the season.

Inexplicably asked by one reporter which player he thought was better, Mason or Swanigan, Jackson, who knew Swanigan from their USA Basketball days, paused, sighed and said simply, “I’m going to say Frank. Yeah.”

Later, he perfectly expressed why.

“Frank has meant everything to our team,” Jackson said. “Night in and night out, we can count on him. He’s having a tremendous season, obviously, and I feel like we all have a lot of trust in him. He’s our leader and any time we see him out there fired up or just giving it his all, he’s going to get our all, each and every one of us.”

I have gotta respect Josh. I am pretty sure that he probably feels like he's the best player on the floor in every game he plays in, and he is going to go out there and prove it. That's just the alpha dog mentality that he brings.

But he comes across as humble, and he's very thoughtful and open with all of the attention that he gets. Sure he's made a couple bad decisions off the court this season, but at least it lets us know that he's human.

He seems very willing to let Frank have the spotlight, and I know that it's probably partly by design for Frank's NPOY candidacy, and because of everything Frank has on the line as a senior who will likely go undrafted while Josh is a lock as a top 3 pick. But you can tell that he really means what he says, and if he really wanted to he could be taking more of the spotlight for himself. This kid is the ultimate team player.

I can see Frank going hard time after time inside. Will he hit the floater at a high percentage is my question. He hardly missed a month ago. Not as much a lock the last 8 games or so.

I feel the same way about Josh. I think he in all probability, is the best player on the court game in and game out yet he knows this is Mason's team and he is happy in doing his part.

Anyone else out there with a queasy stomach this morning? I think Frank and Swanigan may see more of each other than you think, as in drives right at him looking for fouls and the chance to go the line. Who is better than that than Frank Mason III? No one seems to be talking about Landen, but that dude is smart and if he can get out of the first half with only one foul, it would be fantastic. Probably, however, in this one he gets two and sits where we find out who can step up as the X-factor. Landen he can hold his own and make it tough on just about anyone if he can not have to play the last 10 with four fouls. Purdue is not a good match up for us, but these guys are as resilient and tough as any KU team I can remember.

Purdue is a scary opponent for sure. They are underseeded as the Big 10 champions and winners of 10 of their last 12 games, only two losses during that stretch coming against Michigan (one in Ann Arbor and one in OT for the B1G Champ game). A 27-7 power conference opponent who is nothing to scoff at.

I'm concerned about Landen getting two quick fouls as well. He always seems to get two in the first half, but if he can play for 15 minutes in the first half with just 2 fouls we could be in pretty good shape... Less than that and we're rolling the dice against those Bigs. Biggie will likely try to pull Lucas out the perimeter and create driving and cutting lanes. These guys are clever with their off-ball screens and screens for the screener. Jackson and Landen playing help defense without fouling will be huge in this game if we're going to win.

It's the Sweet 16 and everyone has a tough opponent, not sure of the teams left who I'd rather see the Jayhawks playing, but you've got who you get in the bracket and that's how we have to play. I hope the run and gun approach works and we simply outscore them. It seems like we can score with any team in the country, we just have to outscore this one tonight!

I think everybody has their "game face" on. It should be a great matchup, but my money is always on the Hawks. That's my story, and I'm sticking to it.

We have to pull Swanigan out of position defensively and run at him and hopefully get him in foul trouble. If we can get them in positions to where Josh Jackson forces a defensive switch and ends up with Swanigan on him, he has to attack him.

Oregon won their game against Michigan. Michigan had the hot hand. Oregon looked vulnerable and beatable, both in this game and in their previous game against Rhode Island.

Mason won the battle of the player of the year contenders. KU took the steam out of the Boilermakers!!