Kansas guard Frank Mason III (0) floats a shot to the bucket past West Virginia forward Devin Williams (41) during the first half, Saturday, March 12, 2016 at Sprint Center in Kansas City, Mo.

“This morning, he said, ‘Coach I don’t know if I can go.’ Prince (Taurean, Baylor) stepped on it or fell on it (Friday in semifinals),” KU coach Bill Self said.

“He broke his neck one game earlier this year, too. At least that’s what he made everybody feel. Maybe his foot is not as bad as we thought,” Self joked. 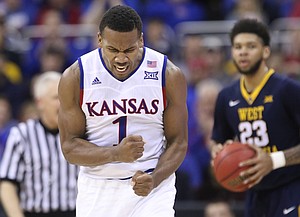 “We did have a lot of turnovers, but I feel like sometimes we had unforced turnovers,” sophomore Devonté Graham said. “We could have done a much better job. Coach had a nice little game plan of throwing it over the top and Wayne inbounding and cutting through. It was a lot of wide-open floor, so I felt we did a pretty good job.”

Added Self: “We flirted with the 10-second call a couple of times, but for the most part I thought our guys attacked it pretty well and were able to basically play through the traps.”

“Free throws are big, especially in a game with a lot of fouls and a physical game,” Wayne Selden Jr. said. “When he can step up and make all 10 of them that really boosted us.”

Stats, facts: KU is 6-3 all-time against West Virginia, including 2-1 this season… Self is 6-3 against West Virginia, while WVU's Bob Huggins is 3-10 all-time versus KU. ... KU has won 14 straight games. ... KU has won 30 games for the 13th season, including five of the last seven years... KU is 31-6 all-time in Sprint Center, including 4-0 this season... Graham had a season-high four steals for the second straight game. ... Perry Ellis was named to the Big 12 All-Tournament Team for the second time and first time since his freshman season (2013). Ellis ended the tournament shooting 18-for-19 at the free-throw line to set a KU Big 12 Tournament record for free throw percentage (.947, minimum 10 free throws made). 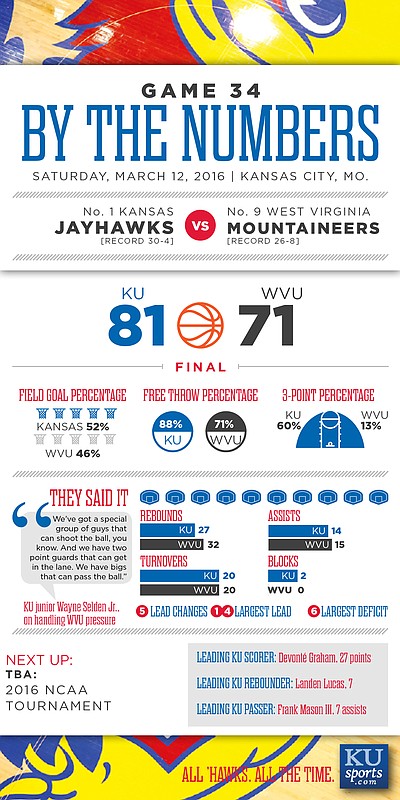 I love Self, but one thing he does that drives me crazy is to treat every game like it's equally important.

As much as I enjoyed seeing KU win the Big XII tournament, it means NOTHING compared to doing well in the next three weeks. Why on earth would you take any kind of a risk with Frank, especially given that he's already had injury issues this year?

I was feeling good about the team finally being completely healthy going into an NCAA tournament, unlike in most recent years, and now this comes out. Thank God Frank didn't exacerbate the injury, and let's hope it doesn't become an issue in the tournament.

This is why I HATE the Big 12 Tournament. KU already won the conference championship which is the main goal. Already guaranteed a spot the in the NCAA Tournament. It's great that Kansas won, but every year I just pray that win or lose, nobody blows out a knee or breaks an ankle or has to miss a game or two.

Len, When I'm looking for a podiatrist, where would I find your clinic? Or is your practice sports medicine? If I need such treatment I'll call you instead of the Kansas team doctors, since you're able to diagnose Mason from news articles.

I trust Coach Self and the medical staff, they would have pulled him if they thought it prudent. RCJH, not going to be sarcastic, that's for someone else to do

It was a bruise from someone falling/stepping on it. Unless another person fell/stepped on it in exactly the same place - highly unlikely, it wasn't going to be exacerbated.

And it wasn't Coach deciding anything. It was Frank deciding he was good to go. No way you're telling a starter I'm not going to let you play. I was a little surprised that he didn't sub more for him, but WVU kind of forces your hand that way. I think Coach had a great quote, "As long as we're here and playing, we might as well win it." I don't think you'll find any player disagreeing with him on that. Definitely not publicly, but I doubt that any competitive athlete is going into a game at half effort. The arm chair crowd, maybe, but not the athletes/teammates. Their not about to consciously let each other down.

Frank recovered from his broken neck pretty quickly so a hurt foot is nothing for this guy. The guy is tough! There's been a few times this season though when I've thought he's gone a little far trying to sell a foul or injury. None the less, he's a stud! Rest up, Frank, and get ready to bring it!

Throughout the game the TV announcers kept mentioning how many turnovers WVU had forced KU into but not once did they mention that WVU had almost as many themselves. In fact, both teams ended up with 20 turnovers. Even this article doesn't mention that.

Frank has taken a beating this year. I cringe every time he hits the deck.

Good point, Dale. Announcers tend to come in with a story line in mind, and they rarely vary from the script. Hated to hear Brent Musberger say at the end of the WVU-OU game that he was never going to retire, and it is because of games like this. Makes me wonder what he would have said if he has been at the KU/OU games in Lawrence instead of Dickie V.