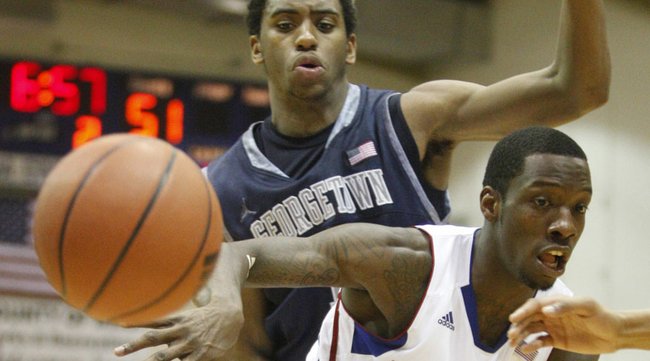 Kansas guard Tyshawn Taylor dishes a pass around Georgetown forward Hollis Thompson during the second half on Monday, Nov. 21, 2011 at the Lahaina Civic Center. 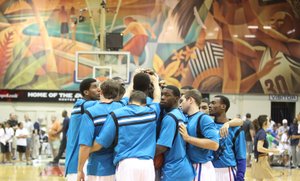 “Overall, was tonight a good experience? In a couple of hours or days, I might be able to say, ‘Yes it was,’” Thompson said. “Sitting here right now, it’s a tough loss.”

Thompson balked when asked if he learned anything about his team.

“After I go back and calm down,” Thompson said, “maybe I can answer that better.”

One point of frustration was his team’s defense against KU forward Thomas Robinson, who finished with 20 points and 12 rebounds.

Georgetown’s goal was to force the big man to take 12- to 15-foot jump shots.

Instead, Thompson said the junior came away with “what feels like 14 dunks.”

Thompson left wishing his team had done a better job of controlling what it could control, which included sticking closer to the scouting report.

He also wasn’t making excuses for his team’s play.

“We’re not going to be singing this ‘young team’ song all year,” Thompson said. “These guys are ready to play. What grade they’re in doesn’t matter. We have to take care of our business a little better.”

Translation: We used to be able to intimidate teams with our rough play back in Dad's day, but now even Kansas plays rougher than we do.

+1...anyone else dragging this morning? (In a good way, of course!)

That game was pretty rough. It's almost like Withey fouled out because he wasn't hacking. Seemed like Thomas got manhandled every time he touched the ball inside of 10 feet but they called Withey for touch (or no touch sometimes) fouls any time a Georgetown player bodied him in the paint. Anyone else notice the moving screens all over the floor for both teams? None of those got called. Just bad officiating the entire game but it went both ways for sure. Overall, this was a fun game to watch. We make some open threes and it could have been much more comfortable.

They used what Bilas called step-back screens. In reality the screener hands the ball off to the cutter and then steps into the defender. That is, by definition, a moving screen and they used it 15-20 times without a foul being called.

We appreciate any respectful posters from other schools, thanks. Good win against ND.

I love Thompson's attitude as a coach. No excuses. Georgetown is a tough, well coached team. Bilas said last night Thompson III wanted to take an official visit to KU as a player when he was leaving high school but the old man nixed it.

Did you love Thompson's attitude when his collection of thugs got into brawls during their tour of China?

Thompson 1.0 and Thompson 2.0 use the Princeton in the worst possible way for basketball.

They run offense for 35 seconds so they have more time to beat people up physically.

The only thing I love about Self and other Coaches adopting XTReme Muscle Ball is that it ends once and for all the only advantage that Georgetown ever held in any contest--mug ball.

Take away mug ball and Thompson 1.0 was a very, very average coach. He was not sharp at all on the bench.

Thompson 2.0 is a much, much better coach that his father. He will last and I suspect that over time he will surrender the Princeton, or adapt it in a way that it becomes much more Self Ball.

Really, the XTReme Muscle variant of the Princeton entirely wastes the athleticism of Georgetown's players.

The most effective offense in this day and age is one that can cycle effortlessly between XTReme Muscle and XTReme Athleticism.

Self's version, descended from Eddie, is not perfect, but it is the best way to go presently.

The Knight/Consonants version of Okie Ball has largely only been effective now for the last three years, if one is willing to play XTReme Cheap Shot, as Consonants has done.

Jeff Capel proved the ineffectualness of the Knight/Consonants approach at OU. Knight proved it was obsolete, when he and Pat could not win with it at TTech.

And once the other teams started XTReme Cheap Shotting back at Duke, the reign of Knight/Consonants Okie Ball ended.

He understands he has a problem.

He knows how Self beat him.

Thompson 2.0 knows that he was trying to set tempo at both ends and Self played 70 point take what they give us and it beat him even on a night when KU shot very poorly from both trey and FT stripes.

Thompson 2.0 will probably begin revamping his system after the season.

Always hated Thompson 1.0 for losing, IMHO, the ' 88 Olympics game by holding Danny Manning out so much during play. Never did understand why any coach would withhold their best player in such an important situation.

As for Thompson 2.0. He might be a better coach than his dad. I'll reserve judgement at this time. Right now I'll put them as equal. (See above.)

I haven't heard all 2.0's comments about last night's game, so he might have given credit where it's due, but so far as I know, he didn't give the Jayhawks any for their win. Usually a coach will concede something to his opponent. If he didn't, than I'll take it he felt he was robbed of a win. (Again, see above.)

The one statistic that I watch first from games is the opponent FG%. Other than the 2nd half of the Kentucky game KU has held opponents to 40% or under. That used to be a standard and we are regaining our defensive prowess.

On offense we struggled. The defenses used by G-town are part of the reason. The other was our inability (except for TT) to make shots. If we are relying on Conner this year he better dial it up when open.

This is pretty much what coach warned us about before games began - that we would defend but struggle scoring. It is small wonder that Thompson was disappointed because our one option was effective down low. TT is becoming an option (like many here I am waiting to see if he develops the long-sought consistency.)