UCLA rolls over Chaminade 92-60 in Maui

UCLA vs. Chaminade at Maui Invitational 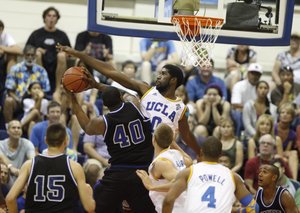 Lazeric Jones had 19 points, Jerime Anderson added 18 and UCLA ran past Chaminade in the second half for a 92-60 victory in the first round of the Maui Invitational on Monday.

The Bruins (1-2) were raggedy early, appearing as if they were headed toward an embarrassing loss in a season that's already had a couple.

UCLA turned around quickly, though, hitting 19 of 33 shots in the second half and preventing any thought of a comeback with seven of its 12 blocked shots.

The Bruins move on to face No. 14 Kansas in Tuesday's semifinals.

Chaminade (3-1) had designs on another upset in its home state, refusing to back down against the bigger Bruins in a tight first half. But the Silverswords didn't have enough to finish this one off, so they head into the loser's bracket.