Josh Jackson thrives on drives while working to improve jumper 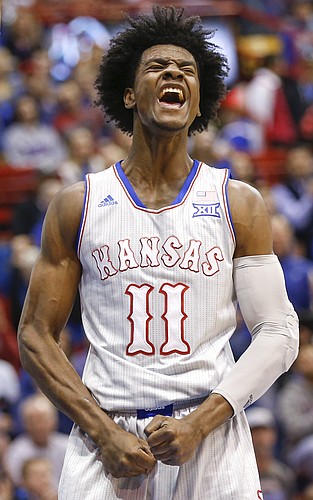 Kansas guard Josh Jackson (11) roars after a bucket and a foul during the first half, Tuesday, Dec. 6, 2016 at Allen Fieldhouse. by Nick Krug

On a night when Kansas thrived with the three-ball, the most talented basketball prospect on the floor found it more beneficial to score inside.

While Josh Jackson’s teammates combined to convert 15 of their 26 shots from downtown, the freshman wing from Detroit missed his lone attempt taken outside of the arc, with the Jayhawks leading UMKC by 26 points in the second half.

Kansas didn’t need its 6-foot-8 NBA lottery pick-to-be bombing away in a 105-62 drubbing anyhow. Jackson, who shot 8-for-12 overall, scored two of his five first-half baskets on layups, and put in two more from near the left block. His only jumper from outside prior to intermission came on a successful Andrew Wiggins-esque long two-pointer from just inside the three-point line near the top of the key.

In the second half, Jackson scored all three of his baskets at the rim — two layups and one monster one-handed jam.

When he wasn’t taking efficiency-friendly shots on his way to 19 points, Jackson flew to the glass for a career-best 12 rebounds and even dished five assists.

Even though his freakish athleticism makes it easy for him to drive and create or score, that doesn’t mean Jackson has any wild ideas about abandoning his jumper or taking a more passive approach on future looks from downtown.

Currently shooting 26.3% on three-pointers (5-for-19) as a Jayhawk, Jackson remains confident in his ability to rise up and drain more difficult shots, even if his form might not be the most traditional you’ll encounter.

Jackson said through the years various basketball types have tried to help him tinker with his mechanics, but he’s not doing much tweaking right now.

“It depends on who they are,” Jackson said of how such conversations usually go, “whether I really trust you or not. But I can say I’ve received some really good tips in the past, and hopefully I’ll receive some more in the future.”

Since arriving in Lawrence, Jackson has relied on the wisdom of KU assistant Kurtis Townsend in the shooting department. A 13-year assistant of Bill Self, Townsend has suggested Jackson keep the ball up more, over his head, on his release, and shown him how spreading his fingers wider on the ball gives him more touch.

The key, of course, is avoiding reverting back to old habits.

“It’s really just muscle memory, yeah. Repeatability,” Jackson said of the key to making adjustments stick. “Being able to be comfortable and have confidence in it.”

While he tinkers with his form — Jackson has made just 26 of 45 (57.8%) free throws thus far – he can always go back to the paint to keep his production up. Nine games into his college career, Jackson is shooting 45-for-76 (59%) on two-point field goals.

Jackson will need to start his jumper from a much higher spot or NBA defenders will consistently pack him. Other than that tweak he looks like a special player. I am most impressed actually by his defense this early in his career.