Milestone win: Self picks up 600th career victory against UMKC

According to freshman Josh Jackson, the goal in the locker room after Tuesday’s 105-62 thrashing of UMKC at Allen Fieldhouse was to make Kansas coach Bill Self misty-eyed over winning the 600th game of his 24-year coaching career.

“No. They weren’t gonna do that,” he protested. “All I gotta do is think about how we shoot free throws. I can’t cry when I’m that mad.” 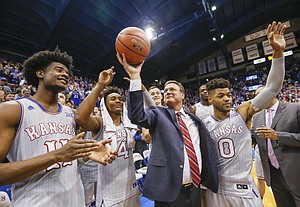 The Jayhawks (8-1) may have finished the game 12-of-22 from the free throw line, thus continuing their rough stretch of freebies to start the season. But that was about the only area which Self could truly criticize his team following Tuesday’s run-away victory.

Knocking in 15 of 27 three-pointers from about six feet farther out on the floor has a way of easing the pain of those close misses, and the perpetual smile that stuck to Self’s face during a postgame video that featured players from all four of his head coaching stops congratulating him on the achievement made the stats of this specific game more than a little insignificant.

“The video was really good,” Self said. “I had no idea. And seeing some of those men, you know those guys were just kids when we had ’em and some of them are over 40 years old now, that was very meaningful.” 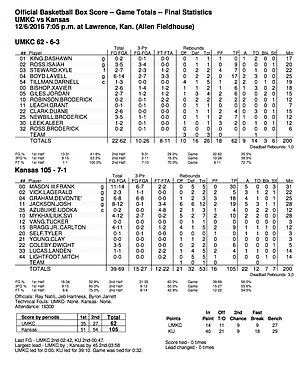 Beginning with Sherron Collins and closing with Wayne Simien, the congratulatory video featured 11 Jayhawks, two of his former Illinois players and one from both Tulsa and Oral Roberts.

In addition to the words of congratulations, the video messages, some which came from as far away as Russia and Poland, provided a little glimpse into the way Self got so many players from such diverse backgrounds to string together all of those victories, from the first on Nov. 26, 1993, to Tuesday’s, which featured a career-high 30 points from senior guard Frank Mason III and the Jayhawks coming within one swish of tying the school record for three-point makes.

“Coach Self made my dreams come true,” said former Illinois point guard Dee Brown of his former head coach who now is 600-189 all-time, the ninth fastest coach in the history of college basketball to reach 600 wins.

“You deserve it and hopefully we’ll be doing this video again when you get 700,” said Darnell Jackson, a fellow Oklahoman and member of Self’s national championship team.

Six members of that 2008 national title squad were represented on the video — Collins, Jackson, Russell Robinson, Cole Aldrich, Tyrel Reed and Mario Chalmers — and the man who hit the biggest shot in Self’s career, dubbed Mario’s Miracle, made sure to point out that his 2008 team was still the best.

Jamari Traylor called Self “one of the most competitive men I know.” Former Oral Roberts captain Earl McClellan said, “Your greatest accomplishment, in my mind, is not what you’ve done on the court but all the things you’ve done off the court. Without a shadow of a doubt, I’m a better man today because of you.”

And Aaron Miles put the cherry on top by calling it like he saw it and saying what so many Kansas fans already believe.

“To the man, the myth, the legend coach Self, I’m happy for you, I’m proud of you and I’m honored to have been a part of it as a player and on staff last year,” Miles said. “I love you.”

There was, of course, also some time for the players who actually delivered win No. 600 with what Mason called a complete game.

Jackson said the team mobbed and hugged Self in the locker room following the victory and, with his wife, Cindy, filming the video from the stands, Self stood and watched with his team before walking off the court together with his right hand thrusting a ceremonial game ball high into the air.

“It’s a great experience for me and the guys, just to be a part of that,” Mason said. “Once everyone that’s on the team is done here, we’ll look back at that and it’ll be really special for us and something we always remember.”

Added Jackson: “It just felt really good. I’m really proud of him, really happy for him. I know he’s gonna (have) continued success, but I’m just really glad to be a part of it.”

When the smile fades and the moment fully sinks in, Self will get back to dissecting Tuesday’s victory and begin preparing for Saturday’s game against former Big 12 foe Nebraska.

What he’ll see is a team that played a “really good” first half and delivered one heck of a haymaker to open the second.

Leading 51-35 at the break, after hitting nine of 15 first-half three-pointers, the Jayhawks opened the second with a 10-0 run in 1:50 that put the Roos (6-4) on their heels and had them staggering the rest of the night.

“I don’t know if it broke their spirit a little bit,” Self said. “But they didn’t respond probably as well as (UMKC coach) Kareem (Richardson) would have liked.”

Tuesday’s largest lead of 45 points actually came with 3:58 to play. A little while later Self was able to empty his bench, which included inserting his son, Tyler, into the game on the memorable night.

Tyler’s only shot missed, just long, but none of that mattered to either father or son following the game.

The Jayhawks wore gray uniforms highlighted by a light pinstripe with white letters and numbers outlined in red.

Freshman Josh Jackson made the first basket. Junior Dwight Coleby made the last. Mason (30) was the leading scorer, Jackson (12) the leading rebounder and Mason and Graham (5 each) the leading assist men.

All 13 eligible Jayhawks who played and the game tipped off at 7:05 and the final horn sounded at 8:51.

Those are the kinds of things that history tends to remember about milestone victories. But this one will be remembered for so much more.

“It was awesome,” Tyler Self said after the game. “He’ll probably downplay it a little bit, but it means a lot to him, it means a lot to our family, we’re proud of him and hopefully he can get as many more wins as he wants.” 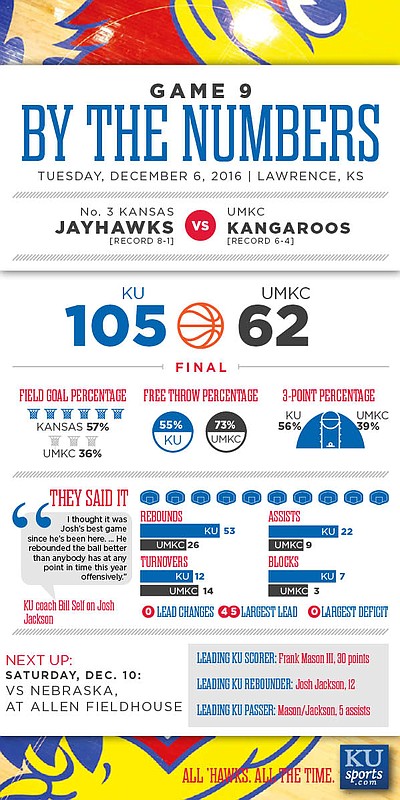 I'm all in with McClellan as one that believes Self's best contributions are off the court. I've said this a thousand times over the past year or so that we need to get Self to run for the 2020 open Kansas Senatorial Seat now occupied by Pat Roberts. That would give him 3 more seasons at Kansas. With a lot of luck he could get to 700 and another National Championship before moving onto the next stage of his life. Bill Self is exactly the kind of person we need in Washington representing Kansas.

Would like to watch the aforementioned tribute video online, so would other members of my family. Will it ever be released for public viewing? Game was on ESPN-3, couldn't get it down here in Arkansas.

It's posted on the Kansas Men's Basketball Facebook Page.

Anyone else have problem with the ESPN3 feed...it displayed a technical difficulties for the first 12 mins of the first half. Game was technically over by the time the broadcast showed up. BTW that is the second time the ESPN3 broadcast was late joining the game. And of course good look finding a phone number anywhere to call someone...

Every morning about a billion people on our planet wake up with real uncertainty about getting something to eat that day.

Our uncertainty about getting a feed for a relatively meaningless basketball game is somewhat insignificant.

I had the same problem. I don't think John meant to get into a deep philosophical discussion between the merits of feeding the hungry and college hoops, :-), but I did just make a donation to the Dollywood foundation for the Tennessee families, so I have my cake and ate it too.

Yes, it joined here at the 10 minute mark as well. Sorry, but I kind of had to laugh at "finding a phone number to call someone."

My family and I work in sports television. You can be sure there was a great deal of stress and trouble shooting leading up to and during the technical difficulty period - from the on-site producer and engineers at Allen all the way back to Bristol. No doubt 5-10 folks were missing meals, literally running back and forth through the FH (perhaps all day beforehand), and writing lengthy reports at games end - with zero opportunity to take a phone call.

Satellite transmission, video and audio feeds, etc. are problems waiting to happen. In the Bay Area, we have some of the very best engineers, tech managers and crews in the business. I'm constantly amazed by their expertise. Still, issues arise, and most are a completely new mystery for them to solve.

Producing a great product for the live television audience is something they take very seriously. A setback like this is a big blow . . . and then tomorrow is another day, another game, and the show must go on.

Everyone had the same problem. Ultimately it's not a huge deal as it's available for replay shortly after the game ends so you can always go back and watch it later.

I'm pretty sure they knew as it said they were experiencing tech. diff. and a 1000+ phone calls wouldn't have sped up the progress. Still, w/every other game not having any difficulties, I was also a little bit miffed.

Had the same issue here as well John. But it did start working midway through the first half.

And Jay, do you have anything better to do than to troll on someone who asked a simple question? Obviously not...

that was a bummer.

lol.. Wish I had scrolled through all the replies before entering my own on the espn delay.

Did the majority of the fans stay for the celebration?