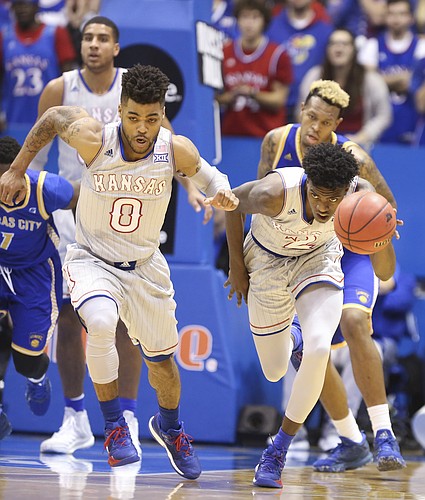 Kansas guard Lagerald Vick (2) charges up the court with a steal next to Kansas guard Frank Mason III (0) during the first half, Tuesday, Dec. 6, 2016 at Allen Fieldhouse. by Nick Krug

Jayhawks scored a season high and shot lights out while doing it. Came within one make of tying a school record for three-pointers and watched four players score in dobule figures in an easy victory.

Carlton Bragg, Udoka Azubuike and Landen Lucas all showed glimpses of improved play. But they also showed enough that frustrated their head coach for him to have freshman Mitch Lightfoot in the game in the first half. The big man project is still a work in progress, but the Jayhawks looked inside to Azubuike a bunch and appear to be trying to get him comfortable in the post.

A career-high tying 30 points for Frank Mason and 27-of-37 shooting from the floor for the four guards who started. So, yeah. Pretty good night.

Sviatoslav Mykhailuk, Bragg, Lucas and Lightfoot all brought pretty good effort even if their statistics weren’t spectacular. Beyond that, Self was able to empty his bench on a night when he picked up career win 600. Playing those guys at the end, no matter how well they do, always helps the bench grade.

How about Svis 7 rebounds? This kid can do a lot of things. In a way, he and Jackson are similar in that they have a well rounded game. The question is always what can you do for me, when your shot is not going in. In the past Svi seemed to sulk, now he seems to keep on playing.