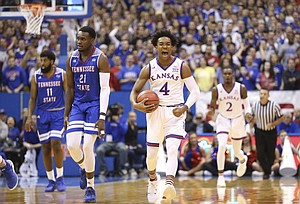 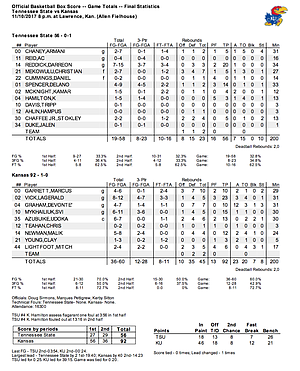 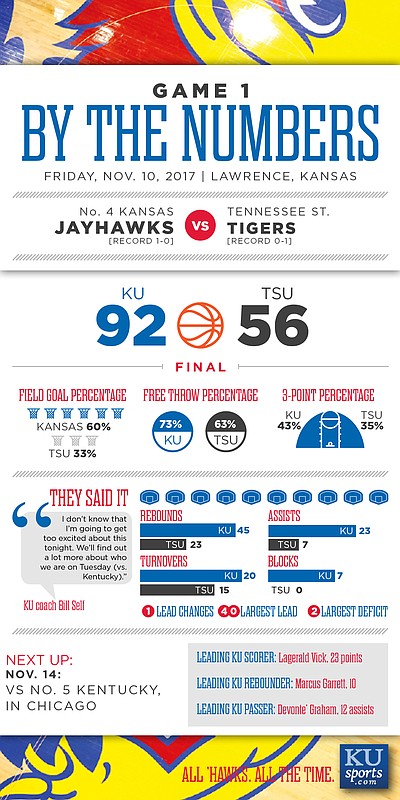 Great show by the Jayhawks! Svi can really shine by playing smart, utilizing his speed combined with Graham's eagle eye.

Vick, by now, he's got every KU opponent's attention. This guy is for real. A threat inside and outside. But he will need to bulk up a bit, he seems a bit thin.

Udoka needs to be more active rebounding offensively. Newman, another choice of perimeter shooter. Garrett is ready to start any game.

Lightfoot, stay active, but dont' get confused, boy! Billy, better get your s&it together if you want to build your career right, kid!

If Billy Preston is going to get himself suspended, this wasn't a bad game to be suspended for. We did just fine without him.

Props to Preston for being forthright about things instead of trying to hide it from Coach Self the way Josh Jackson tried to hide rear-ending that guy in the parking lot.

Dok’ Is only credited with two blocks? If not “blocks” he redirected at least a half dozen more!

A little bit concerned with 20 turnovers and having 4 guards handling the ball, that should be taking of the ball. But a great game, now on to the Blue Blood war, Go Jayhawks!!

There's got to be a guard who can fill the "Devonte to Mason" role. When Devonte was on the bench, Newman ran point a couple of times as did others without much leadership. Good ball movement, but not the perception of a PG. Maybe that is not a bad thing though, so that the other team doesn't know who's in charge of the play!

Vick is getting the respect he deserves with his shots as well as his tenacity. His interview skill, however, still needs some tweaking. He lets his play do the talking!

I don’t think that Vick will even be able to bulk up but that’s not a bad thing. He needs to stay lean and mean. It makes him a slasher and a high flyer. I expect that he will make the highest number of appearances on the ESPN top ten of anyone on the team.

If he wants to play in the NBA, he should.

I agree, Michael. LaGerald just seems to have another gear when he is driving to the basket and going to the glass for offensive rebounds. We will definitely see some spectacular and athletic dunks by him on ESPN.

That's assuming they show KU on ESPN at all. I recorded and watched 2.5 hours of Sportscenter after the game to catch up with the other games on opening night and they never even showed the KU game. I was so confused by this I recorded another Sportscenter that came on after the first two and watched it this morning and still there was no KU game highlights. Every one of them opened with Mizzou, then Kentucky, then Duke, but never any KU at all. It was quite odd.

Let's wait until we skin them cats fur this Tuesday.