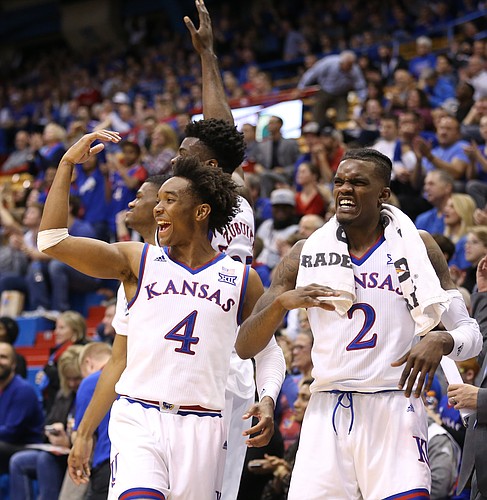 Kansas guard Devonte' Graham (4), Kansas guard Lagerald Vick (2) and the Kansas bench celebrate a bucket from Clay Young during the second half on Friday, Nov. 10, 2017 at Allen Fieldhouse. by Nick Krug

1 - Devonte' Graham: Whistled a beauty of a no-look, one-handed pass off the dribble from mid-court to Svi Mykhailiuk under the hoop for the most memorable of his 12 assists. Also had 10 points and fell three rebounds shy of a triple-double. Didn't score a point in the second half and still was the most influential player on the floor. Primed for a terrific senior year.

2 - Lagerald Vick: Made some really nice plays, scoring and passing, during his time playing in the middle of Tennessee State's zone. Made 4 of 7 3-pointers on his way to a game-high 23 points and had five rebounds, three assists and a steal. Needs to cut down on turnovers (four).

3 - Marcus Garrett: Started in place of Malik Newman and didn't look the least bit out of place in contributing 10 pounds and 10 rebounds. Had just one of KU's 20 turnovers.

5 - Udoka Azubuike: Played 30 minutes and showed the wear and tear of that in the second half. Still holds the ball too long in the post when a scoring opportunity doesn't present itself, but he's a load to try to defend. Totaled 13 points, six rebound and two blocked shots.

6 - Malik Newman: Getting bumped from the starting lineup seemed to elicit the intended response. Newman brought fire off the bench, hitting the first shot of his Kansas career, a 3-pointer from the right corner, and following that up with a hard, under-control drive to the hoop in transition for two more points. Rest of night didn't always go as smoothly, but he did contribute 12 points, four rebounds and a blocked shot to go with four turnovers.

10 "pounds" and 10 rebounds...i like the rhyming, especially if they were all dunks.

Radio announcers said Newman didn't get the start based on practice. Probably based on defense, but they didn't say that.

Newman will toughen up the defense. We need his offensive game to play with the big boys. Svi actually played a little better defense. And he got some rebounds.

Lot of work to still be done for the team. It's Early.