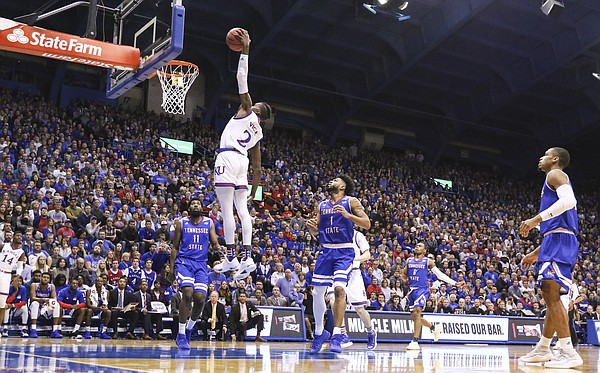 Kansas guard Lagerald Vick (2) floats in for a dunk during the first half on Friday, Nov. 10, 2017 at Allen Fieldhouse. by Nick Krug

It would’ve been an A+ if not for the 20 turnovers. The Jayhawks shot 60 percent from the floor, dished 23 assists on 36 field goals, knocked in 12 of 28 3-pointers and had six players reach double figures. Efficient and flat-out dangerous from start to finish.

Tennessee State was overmatched from the jump and the Jayhawks never let up. KU swiped eight steals, forced 15 turnovers and limited the Tigers to 32.8 percent shooting, a number that actually went down in the second half even though the game evened out. Kansas also out-rebounded TSU 45-23, including a 35-8 mark on the defensive end.

With just two forwards playing in the game thanks to Billy Preston’s one-game suspension, KU got solid but unspectacular showings from Mitch Lightfoot and Udoka Azubuike. The two combined for 19 points and 11 rebounds on 8-of-11 shooting, but also turned it over six times.

Devonte’ Graham threatened to record a triple-double, Lagerald Vick scored anywhere and everywhere he wanted and Malik Newman and Svi Mykhailiuk combined to knock down 5 of 10 3-point shots. And then there was freshman Marcus Garrett, who was a surprise starter and recorded a double-double in 29 minutes.

Newman and Lightfoot, along with walk-ons Clay Young and Chris Teahan were the Kansas bench in this one and they combined to shoot 8-of-17 from the floor for 21 points and nine turnovers. Outside of his four turnovers, Newman showed the kind of effort and intensity Self was searching for. And Lightfoot, when he played within himself, was the solid presence KU needs him to be. When he didn’t, he turned it over four times.

Mitch was also 2-2 from behind the arc. I seem to recall a recent article where he commented that he had been working on his 3-ball, but that he didn't expect to be showing it. It was nice, and would make the team even harder to defend if he (and Billy) are playing the 5 and being able to space the D that much more.

No doubt about it, but that's still not what this team needs and wants from its big men.

There's a big difference between shooting those shots when your team is up 30 points and shooting them in a close game. Mitch let it fly tonight because he had nothing to lose. But I think he'll be less likely to do so in tighter games, which is the right move.