Kansas guard Malik Newman (14) leaves the game with a concussion during the second half, Sunday, Dec. 10, 2017 at Allen Fieldhouse.

When three Arizona State players and Sun Devils coach Bobby Hurley stepped into the Allen Fieldhouse media room to field questions about their 95-85 victory over No. 2 Kansas on Sunday afternoon, three of the four were wearing ASU warm-up shirts that simply read, “Guard U” on the front of them.

Hurley was one of them.

Even though he did not play in Sunday's Arizona State victory, the former Duke standout, whose team is now 9-0 and poised for a serious climb in the polls this week, coached a group of players who displayed the same tenacious spirit that Hurley made his signature style during his career with the other Devils.

“At the end of the day, their guards were just better than us,” said KU senior Devonte' Graham.

After watching his team light up No. 2 Kansas (7-2) for 51 percent shooting, including a 14-of-28 clip from 3-point range, the magnitude of the accomplishment was not lost on Hurley or his players.

“No one really wins here,” Hurley said. “You come in here, most of the time, you're not leaving real happy. It was a special win for us and our program and I didn't have to coach a whole lot tonight. These guys sitting right here deserve all the credit.” 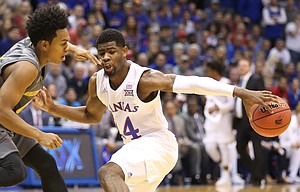 View a gallery of images from Sunday's matchup between the Jayhawks and Sun Devils in Allen Fieldhouse.

With just a couple of minutes remaining in Sunday's loss, KU sophomore Malik Newman found himself down on the floor, holding his head with one shoe off as the action raced down to the other end.

Officials quickly stopped the game, and as trainers tended to Newman, he continued to wince in pain while grabbing his head with both hands.

“They said he's concussed,” KU coach Bill Self explained after the game. “So, I'm sure he'll be out a few days. I don't know the severity or how bad it is.”

It was a weird game for KU senior Svi Mykhailiuk, who was scoreless in the first half but ended up with 14 points on 3-of-14 shooting, including a 3-of-11 shooting clip from 3-point range.

The Ukrainian's struggles did not stop there, though, and were probably more evident a few columns farther to the right on the stat sheet.

After dishing six assists to go along with zero turnovers in the first half, Mykhailiuk flipped the script in the second half, recording zero assists while turning it over four times.

“They said every time Svi had the ball, 'Crowd him. Try to take his ball,'” recalled Self of the ASU game plan. “And his ball-handling was very, very weak today.” 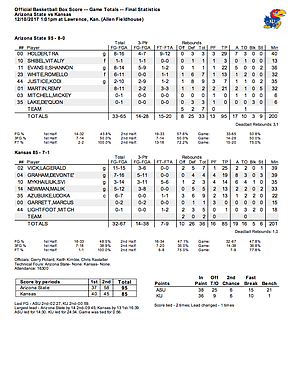 Walton in the house

NBA and UCLA legend Bill Walton called his second career KU game as a broadcaster on Sunday for ESPN during his first ever trip to Allen Fieldhouse.

Before the game, on various pregame shows, Walton gushed about his time in Lawrence.

“The people here in Kansas have just been so great,” Walton said on the Jayhawk Radio Network pregame show. “Spectacular place, spectacular time, I'm the luckiest guy in the world. And to be here in the shadow of Wilt Chamberlain (is amazing).”

A week of waiting

Because of first-semester finals, Kansas will not return to the floor until Saturday, when they will travel north to take on former Big 12 foe Nebraska at 7 p.m. at Pinnacle Bank Arena.

According to Self, the time off will be good for this team, which will practice every day but Monday while working around finals schedules.

“Yeah, yeah, oh yeah,” said Self when asked if the down time might come at a good time. “But finals week is a hard week to get a lot better because, obviously, that takes priority over everything else. Usually finals week is a maintenance week. Obviously, we need to get better. But beginning after finals week is over, that's when I hope we can really hunker down and do some things to improve.”

Added Graham: “We've got a whole week until our next game and we're going to get better.”

KU's loss, No. 11 all-time at Allen Fieldhouse for Bill Self, was the first before Jan. 1 of any season since Oral Roberts knocked off KU on Nov. 15, 2006... Self is now 225-11 all-time at Allen Fieldhouse... Arizona State's victory tied the series with Kansas at five wins apiece... ASU became just the 25th Kansas opponent of the Self era to shoot better than 50 percent from the floor. Kansas is 6-19 in those games... KU's 38 3-point attempts set a new school record, breaking the mark of 36 set earlier this season in a win over Texas Southern.

Kansas shut down by Arizona State guards by KUsports.com

Devonte' Graham after loss to Arizona State: 'Their guards were just better than us' by KUsports.com

Bill Self: 'This is the softest team Kansas has had since I've been here' by KUsports.com

Udoka Azubuike on KU's problems in loss to Arizona State by KUsports.com

More news and notes from Kansas vs. Arizona State 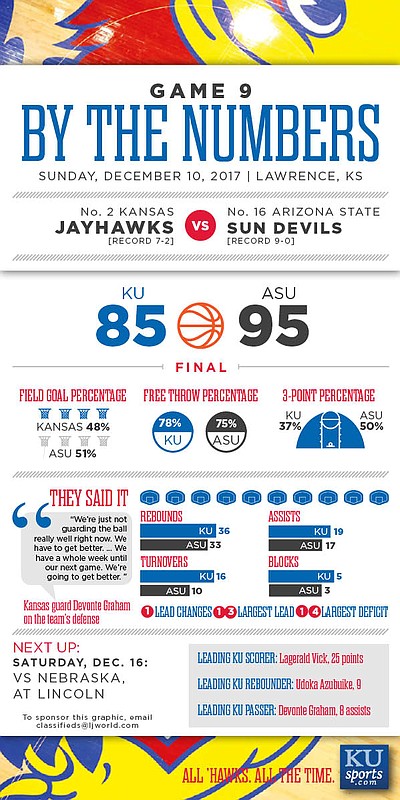 Svi just had a horrible night. But our guards are prone to being stripped of the ball a lot.

Yes our guys hate to lose. But honestly those Devil guys were hotter than a firecracker and sometimes that creates wins.

"ASU became just the 25th Kansas opponent of the Self era to shoot better than 50 percent from the floor. Kansas is 6-19 in those games." Moreover, they shot 50% of their 28 shots from 3, many of the shots being from several feet beyond the three point line.

the 3 ball issue wouldnt have been a problem if KU had more size and could score more on the inside to offset it..or if they shot a lot of FT..but ya cant get out shot from 3, barely score in the post AND not shot FT and expect to win

Unless we get it together and find our game moving forward, we'll lose at:

a 10 lose season is probably right...these last 2 losses werent just a case of the other team playing above themselves, if anything they highlight KU's major weaknesses..Self may not have a choice but to get fancy with his defenses since he doesnt have enough guys who are strong defenders..maybe playing zone and making the game slower and will help the 7 guys were have to save energy...this season is turning out to be a disaster...next year when we have more size then we can get back on top but this season, ive kinda already written it off

Maybe a shakeup to Malik's brain will make him less selfish with the basketball and stop trying to go 1-on-3 against opposing players.

We should unite as Jayhawk family. When one member is down, let's help him get back up again. I wish your speedy recovery, Mr. Newman. The team needs you, no matter what. You will get better and we believe you will be the best you can be helping our team to regain confidence and keep the B12 trophy in Lawrence! God bless you!