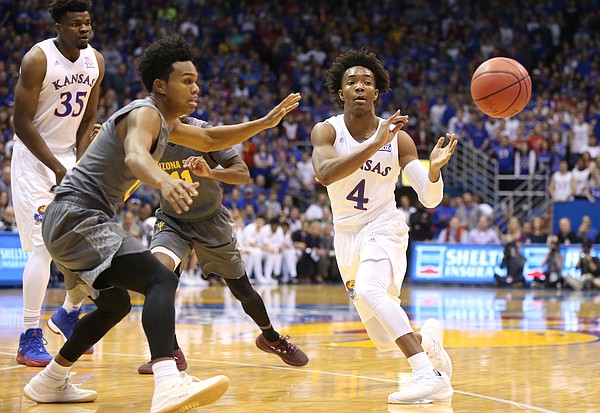 Kansas guard Devonte' Graham (4) throws a pass to the wing while defended by Arizona State guard Tra Holder (0) during the first half, Sunday, Dec. 10, 2017 at Allen Fieldhouse. by Nick Krug

1 - Devonte’ Graham: Had his finger prints on pretty much every good play to deliver Kansas a 15-2 lead, but in the end, Arizona State’s guards ruled the day. Graham had 19 points, eight assists, four rebounds and three steals and made 5 of 11 3-point shots.

3 - Svi Mykhailiuk: Played two completely different halves, doing good and not-so-good things in both halves. Missed all five shots, including a trio of treys, in the first half, but also had six assists without turning it over. Scored 14 second-half points, but turned it over four times, killing chances at a comeback. Teams will follows ASU's scouting report on Svi: Crowd him when he has the ball to pick his dribble.

4 - Malik Newman: Graham did terrific job of setting him up for 3-pointers and he made 3 of 8 to finish with 13 points, five rebounds and two steals.

5 - Udoka Azubuike: Had many opportunities for blocked shots but came away with only two. Had 13 points and nine rebounds.

7 - Marcus Garrett: Scoreless with one rebound and no assists in 15 minutes. Missed a pair of 3-pointers, his only two shots.

You are absolutely insane for having Svi rated two spots above Udoka in this one. I am not sure what game you were watching. Apparently you down rated Udoka for not blocking the shots of ASU's guards that were driving absolutely unopposed in addition to being able to get wide open threes. Usually a team playing any kind of defense will at least put up a fight against one of those. Udoka was the only Jayhawk in the game able to guard his man.

yeah, I'm with you on this one. White seemed overwhelmed by Dok's presence. Svi has costed us plenty but that's also attributed to ASU quickness. Dok should be at least above Newman.