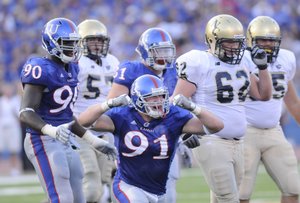 Of the four, only Briscoe was listed as a projected starter this season. The 6-foot-3, 200-pound Dallas native earned honorable-mention All-America honors from Sports Illustrated last year after catching 92 passes for 1,407 yards and 15 touchdowns and was tapped a preseason All-Big 12 selection this fall by the league’s media.

Following the game, KU coach Mark Mangino said that the suspensions of Briscoe and Greene stemmed from their earlier suspensions during spring football.

“They knew when they were suspended in the spring that part of the stipulations were that they weren’t going to play in the first game,” Mangino said.

“Jeff Wheeler and Pendleton’s issues are different,” he added. “They violated team policy, and I did not have them play tonight.”

After a relatively quiet sophomore season, junior defensive back Chris Harris reintroduced himself to Kansas fans in a big way Saturday.

On the Jayhawks’ first defensive series alone, Harris recorded a tackle for loss, a forced a fumble and a fumble recovery and finished the day with seven tackles and a pass break-up.

“I think Chris is one of our most improved players since last season. I really do,” Mangino said. “He’s into it. He’s a great worker. It’s important to him.”

Asked about Harris’ apparent struggles a season ago, after a freshman season in which he was named Big 12 defensive newcomer of the year, Mangino said, “We had him out of position. He’s not a pure corner. He’s a better safety, and that’s where he’s at now.”

Sophomore cornerback Anthony Davis might be wise to push Saturday’s game from his memory.

In his first career start, Davis was flagged for three pass-interference penalties, two of which came on consecutive plays, and was eventually spelled in favor of backup Calvin Rubles.

Mangino, who blamed the penalties on nerves, said the team hasn’t lost faith in the player and that he’ll continue to figure prominently into the team’s secondary this fall.

“There’s no excuse for it,” Mangino said of the penalties. “He’ll learn from it and grow from these experiences.”

Briscoe had better get with it if he wants a high NFL draft position. One T.O. in the league is enough and his behavior will reduce his draft level-and cost him a lot of money at the same time.

He just didn't get good enough grades. It's not like he's out punching cab drivers.

He'll get it together just fine.