KU safety Darrell Stuckey tries to bring down Nebraska wide receiver Niles Paul in the first half of Saturday's game. 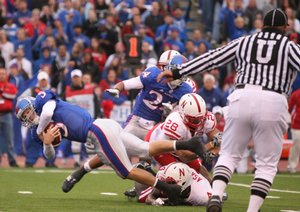 Kansas University’s pooch kickoff — with the wind and a 17-16 lead — certainly surprised lots of fans Saturday at Memorial Stadium.

With a running start, he fielded Jacob Branstetter’s short boot at the 20-yard line and, with 71⁄2 minutes to play, darted 44 yards to the KU 36.

“We’d been watching film. I knew by the way he was coming to the ball how he was going to kick it,” Paul said. “The kicking team blocked hard for me and gave me a lane to make a play.”

Paul’s two-point conversion catch off a scramble and pass from Zac Lee put the Huskers on top, 24-17, just 1:04 after KU had claimed the late lead.

“It’s a great feeling, not just winning, but to be good on offense. We scored (with game on line). It’s the best feeling you can have,” said Paul, who had 244 total yards, including 154 yards off four receptions.

Helu, whose 20-yard burst erased KU’s 17-16 lead, escaped around end and ran 30 yards on a third-and-10 call from the NU 37, keeping alive the Huskers’ final scoring drive that resulted in the insurance points.

“This means a lot. It’s a road game in the Big 12 North. They were a hungry team. We knew that coming in here,” said Helu, who finished with 156 yards off 28 carries with three TDs.

His performance put Nebraska in a great position to win the North. The Huskers meet Kansas State (6-5, 4-3) Saturday in Lincoln for a spot in the Big 12 title game.

“What happens is in our hands,” NU coach Bo Pelini said. “It’s at home. We’ve got to get better as a team this week and be ready to play because I know they will be. Coach (Bill) Snyder will have them ready to play.”

The much-maligned Cornhusker offense gained 410 yards to KU’s 335. Lee, who worked the whole game, completed 13 of 21 passes for 196 yards. He also rushed for 53 yards off nine carries.

The NU defense did its part. With the game tied 10-10, KU’s Kerry Meier caught a Todd Reesing pass and lugged it 16 yards to the NU seven. NU’s Dejon Gomes knocked the ball loose, and the Huskers recovered and promptly marched down to kick a field goal.

“It was huge,” linebacker Phillip Dillard said of Gomes hustling to force the bobble after getting beat on the pass play. “He didn’t feel sorry for himself. He saw an opening to get the ball out. It’s what we practice, ‘turnover, turnover,’ and it paid off.”

Go ahead, say it out loud. Big 12 North Champions. The natural order of the universe has been restored. It feels good, doesn't it.

Congrats - props to you. Guess it feels good to win by default. Sorry, but there isn't a dominant team in the North this year and whoever plays Texas is going to get tromped on. I say this as a fan of college football in general. The North has been BAD this year! I hope we rebound next year and produce a team that can give the South a run but it's not happening this year.....

Not so fast meatsauce. The natural order of the universe won't be restored until they are humiliated once again in a game that matters. Say like the conference title game.

After reading all these comments posted by jayhawk fans, only a few I can tolerate. Spill the same ol' crap about posting on an opponents site, etc...but this site is linked to a NU site, so I don't mind reading other perspectives. Why is there so much ill will after a great game!? Why so much hate for a NU program with similar accomplishments as a KU basketball program!? You don't see husker fans bashing KU basketball just because.... Why bash NU football and the argument being recent trends? Well, NU is trending back up so at least admit it. KU is doing better in football but will not and cannot in any way be compared to NU until some sustainable success is seen.

Figure it out dumbf###. If I went on a Nebraska website and starting talking smack I would be crucified and rightly so. I stand by my statements. Nebraska football tradition is about recruiting criminals, is irrelevant, and your women are fat and ugly. If you can't tolerate my comments then leave.

If all else fails, go for the mom reference. Classy!

Try to remember whose house your in.