Notebook: Upcoming trip to West Virginia should be ‘war’

Kansas forward Landen Lucas (33) rejects a shot by Texas Tech guard Keenan Evans (12) but is called for a foul during the first half, Saturday, Jan. 9, 2016 at United Spirit Arena in Lubbock, Texas.

Lubbock, Texas — After completing the first stage of a two-game road swing with a 69-59 victory at Texas Tech Saturday, Kansas University’s men’s basketball team has another challenge ahead Tuesday.

“I think it’ll be a war,” said KU coach Bill Self, indicating the atmosphere could rival last Monday’s KU-OU game in Lawrence.

Red Raiders announcer Brian Hanni, who worked in Lawrence for several years and broadcasted KU women's games, among other assignments, presented Davis with a pair of boots.

The non-sellout crowd of 14,231 gave Davis a loud ovation. Davis has broadcast KU games for 32 seasons. 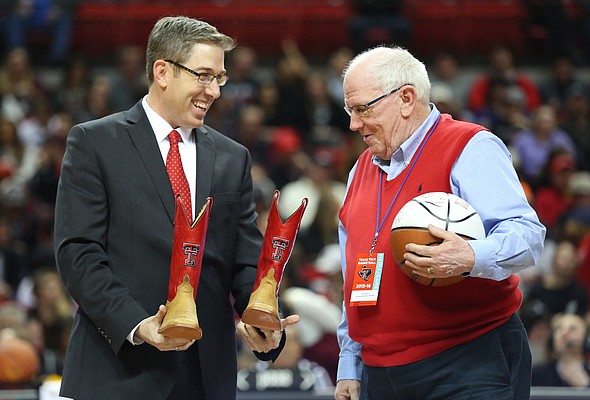 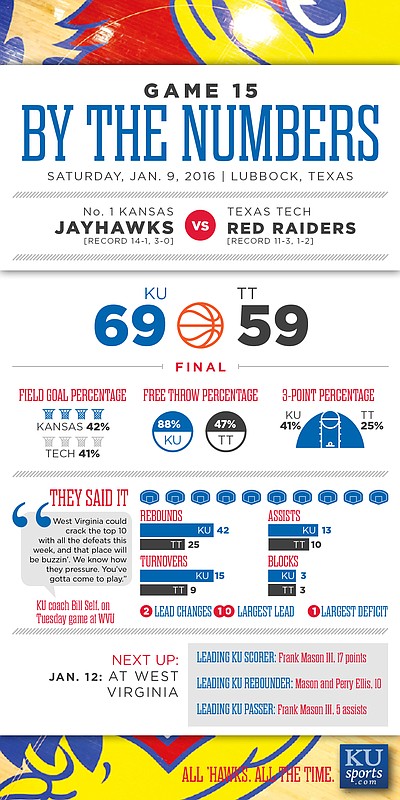 What a great gift to give to Bob Davis. I will miss hearing his broadcasts for KU.

Not only is Bob Davis a class guy, that was classy of Texas Tech to make this presentation publicly at the game and of their crowd giving him a loud ovation. I sure can't imagine that happening at Missouri. Yes, I know their announcer knew Davis from his Lawrence days, but nonetheless it was a classy thing for TT to do.

WVU fans are hoping to storm the court. No other team in the conference has to face such a hostile crowd every road game.

Reminiscent of Max Falkenstein's farewell tour of the Big 12.