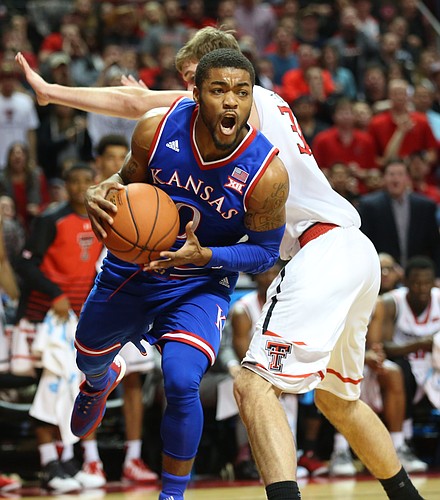 Kansas guard Frank Mason III (0) moves past Texas Tech forward Matthew Temple (34) as he looks for an outlet during the first half, Saturday, Jan. 9, 2016 at United Spirit Arena in Lubbock, Texas. by Nick Krug

1 - Frank Mason III: Hit two big three-pointers in the second half and finished with 17 points, 10 rebounds, five assists and two turnovers. The rest of the team combined for eight assists and 13 turnovers.

2- Perry Ellis: Had 15 points and 10 rebounds. Norense Odiase gave Ellis a lot of trouble when he checked him late in the game.

3 - Svi Mykhailiuk: Made 2 of 3 three-point shots, including a big one late in the game. Scored seven points in 14 minutes and looked very comfortable for an 18-year-old.

4 - Landen Lucas: Physical style wore down the Red Raiders and played a part in a 42-26 rebound disparity, even though Lucas had just two rebounds. Had two assists and a big blocked shot and scored five points in 16 minutes.

5 - Brannen Greene: Had a couple of nice stretches early in the first half, made 2 of 3 three-pointers and had four rebounds. Also had three turnovers, which limited his playing time to 11 minutes.

6 - Wayne Selden Jr.: Had the biggest shot of the night, burying a three from deep in the left corner just ahead of the shot clock expiring. Couldn’t get anything to fall in the first half, when he missed all seven field-goal attempts. Heated up as the game progressed and finished with nine points and just one turnover.

8 - Devonté Graham: Rough night for the sophomore guard. Made just 1 of 6 shots from the field and missed both three-point attempts.

9 - Hunter Mickelson: Scored the team’s first bucket but didn’t get another point or rebound and played just five minutes.

11 - Cheick Diallo: Limited to three minutes after making a mistakes at both ends.

I read the ratings after every game, and would like to suggest a slight change to the system.

One day before each game begins, put a weight measure to the rankings, based on difficulty of the opponent. Done the day before, you are using the latest/best info. available. At the end of the season, go back and reset the weights based upon the final rankings. Here it is:

Non-Con games vs. unranked opponents: 1.0 Easiest games of the year. This is your baseline.

Non-Con games vs. ranked opponents: 1.2 MSU, for example. These are tough games, early in the season.

Home conference games: 1.1 Though it's critical to hold serve, our record shows that our opponents have a low chance of survival.

Away conference games vs. ranked opponents: 1.3 Huge wins to secure the championship. These are the "two-game" differentiators against your likely competitors for the championship. Very tough gyms, very tough teams, lots of stress.

Big 12 Tourney games: no one cares

Some variation of this would actually be useful. It's good that a kid scores 25 vs. an Anteater or Banana Slug, but those aren't good teams. Give credit where credit is due: who plays well against the good teams or in the tough settings?

This type of "weighting" or some variation, would heighten the accuracy - who played the best against the best? It would give us all another thing to argue about.

Also...Bill Self should be fired.

Who in the h___ would want a job created by firing one of the best coaches in the nation?

A.J. I was just goofing - it was a reference to another poster, who rants on here all of the time with some equally crazy stuff.

Lol, I think Tom Keegan displays his usual adherence to professional integrity when laying this column on us. We read and agree or disagree but reading anymore into it than that is by personal choice only. Maybe weekly or season voting touts use it for information, I don't know. Do sports writers pore over each others work excessively? My guess ii's just for entertainment purposes and as such keeps him in a job.