Kansas guard Tyshawn Taylor signals to the bench after hitting a three-pointer against South Florida during the second half on Saturday, Dec. 3, 2011 at Allen Fieldhouse. 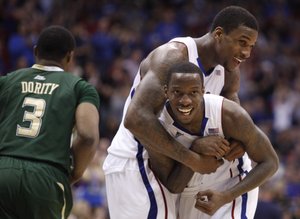 University of South Florida men’s basketball coach Stan Heath was asked a lot of questions about what went wrong following USF’s 70-42 loss to Kansas University on Saturday at Allen Fieldhouse.

And Heath had plenty of answers.

But one seemed to sum it up better than all the others combined.

“Tyshawn Taylor, in the second half, was just the difference,” Heath said.

KU’s senior point guard hit four of five second-half three-pointers and scored 20 of his game-high 24 points in the second half, turning a three-point game at halftime into a blowout victory for Kansas (5-2).

Although Taylor was the catalyst for KU’s 46-21 second-half spread, the Jayhawks, as a whole, wore down the Bulls (5-4) throughout the second half.

First came a 7-0 run that pushed the Kansas lead to 10. South Florida hung tough after that one and actually cut the deficit to five with 11:21 remaining. But even though the Bulls hung around on the scoreboard, their body language showed they were gassed.

“At the start of the second half, they went on a run, and I think that we put our head down,” USF junior Toarlyn Fitzpatrick said. “We tried to withstand the run and go on a little run ourselves, but they started knocking down more shots, their fans got into it more, and we didn’t respond.”

Added Heath: “We took a timeout (after KU’s first run) and got things into a closer range, and then, in the next wave that came, it just seemed like we couldn’t regroup. It might have been the conditioning.”

From start to finish, the Bulls showed signs of fatigue Saturday night. For the first 30 minutes, they didn’t let that keep them from battling. But while Kansas seemed to grow stronger as the game moved along, the Bulls’ lack of depth and fresh legs caught up with them. It was not without good reason.

Senior forward Augustus Gilchrist, who led USF with 11 points in 26 minutes, practiced for the first time all season on Friday. Freshman guard Anthony Collins, who finished with eight points in 32 minutes, was still in his first week of full-contact practice. And Saturday’s game marked the first time the two had played in a game together.

In addition, the Bulls were missing last year’s second-leading scorer, Jawanza Poland, who has yet to practice all season.

“It’s been a strange beginning of the year for us,” Heath said. “We literally have not been able to practice with 10 guys since October. I don’t think our conditioning is where it needs to be, and a lot of that is not the kids’ fault, it’s just the lack of having bodies out there to practice every day.”

Of course, Saturday, Kansas had as much to do with USF’s struggles as its conditioning.

“I don’t know which team you want to talk about, our first-half team or our second-half team,” Heath joked in his opening postgame comments. “Our second-half team lost a little focus and really, more than anything, just couldn’t keep pace with Kansas.”

Where are all the TT degraders gone? (oh, well, you get it. i think.)

When I see comments like this, I just shake my head. I don't see myself as a TT "dengrader" .. but a TT realist.

Where will you be when he has a 7 turnover, 3 for 13 shooting night with 1 assist? Probably saying he's the best thing since sliced bread, or not posting at all.

Are you related to Ahsper....... or whatever that booster's name is.

No offense, but this is the same guy who set a school record for turnovers against Duke. I don't think it's hating when someone calls him out for what he's legitimately done wrong in the past. Neither will I "degrade" on him for this last game's stellar performance. I like the "TT realist" comment above, because the guy is so wishy washy. You never know what you're going to get out of him. I wish him the best, but he just seems out of his depth at times for a starting point guard at a super-major program. And, of course, other times the game seems to come really easily to him and he looks great, like he did in one half of the last game. I feel like he's saying the right things this year and exhibiting true signs of leadership. I hope the team, as a whole, not just Taylor, can get over this sloppy, lazy-pass syndrome that's been going around for the past three games. It's been painful to watch.

We are still here, dude.

I haven't watched the game yet, (watching football), but i will certainly give him props for playing well, which apparently he did.

The problem is: He is a senior. He is supposed to play well every night.

That might not mean scoring, but every night he should lead the team, lead the break, make the key assist via a pass, take his man out of the game.

It's about being consistently dominant as a senior leader.

There are ZERO nights where he can have double digit turnovers.

That just doesn't happen with a good player, let alone a great player.

Nobody has ever questioned the kids god given athletic ability.

The question is whether he has done anything on his own to grow up and become a complete player beyond the pure athleticism.

He's got a whole year to prove he can and this team will need that kind of effort and performance every single night.

I think Hudy deserves most of the credit for that. She's the best in the country at what she does.

What is with that stupid "okay" sign the players are doing over an eye? I saw the Kentucky players doing it and thought it looked stupid as heII and now I see that Taylor has picked it up. What is it supposed to mean?

It's a stupid, showboating move after hitting a three .. note the three fingers in the air.

I didn't know former KSU player Ron Anderson is on the USF team. He had a few KU fans speaking with him.

Getting the players into great shape goes entirely to Andrea Hudy.

Hudy is great at building strength without losing quickness. If that is what you mean by "in shape", I agree.

The more important factors Saturday were conditioning (endurance) and attitude (intensity) and that is all on Self — both his recruiting and his preparation.

good post, ralster. Those 3 shot clock violations go a long way to explaining Bill Self 101. The crud and some woeful first half offense didn't combine to subdue some very tough defense throughout. Our juniors and seniors are well seasoned in that aspect of current Jayhawk basketball.