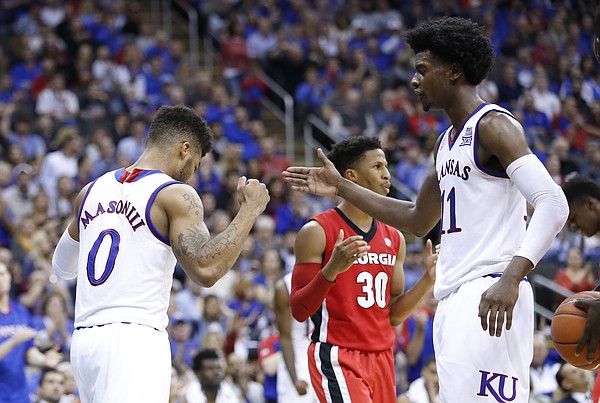 Kansas guard Frank Mason III (0) slaps hands with Kansas guard Josh Jackson (11) after getting a bucket and a foul during the second half, Tuesday, Nov. 22, 2016 during the championship game of the CBE Classic at Sprint Center. by Nick Krug

Quick grades for five aspects of KU’s 65-54 victory over Georgia in the CBE Hall of Fame Classic on Tuesday night at Sprint Center in Kansas City, Mo.

At this point, this team’s offense is coming from its four guards, so if you’re grading on that kind of a scale and not expecting much from the KU big men, you can’t give the offense anything other than an A. We'll throw in the minus for the poor contributions from KU's frontcourt and Svi's off night shooting the ball.

To give the KU frontcourt an F would be a discredit to junior Dwight Coleby, who got the most out of his body and his minutes and, according to Self, “bailed out” KU’s bigs. So give Coleby a solid B or B+ and give the rest of the bunch an F. That equals a D on the final grade sheet.

Frank Mason III, Devonte’ Graham and Josh Jackson were more than just all-tournament team selections. They were awesome. They play so fast, so hard and so well together.

Lagerald Vick played with great effort, gave some good minutes and finished with solid numbers (9 points and 8 rebounds) and Coleby came in and played well beyond what anyone would’ve expected from him. Svi (1-of-7 from the floor in 23 minutes) and Udoka Azubuike (next to nothing in five minutes), left more than a little to be desired.

Front court is a real problem. Lucas is in a fog, and Dok is just inexperienced. Client gave some real minutes and did the job. Svi has to hit shots or become a serious liability. Graham and Mason taking a lot of punishment to get the points. And Jackson becoming the star he is. Should be good times ahead

its time to sit Lucas as a starter. I've noticed he is typically just trotting back on defense, never really hustling, rarely breaks a sweat. I don't know, he's just not into it this year or else his injury is bad. If so, the time on the bench could let him heal. 5 fouls in 10 minutes??? That type of player at the 5 will get eaten alive in conference.

Don't we all agree that to say we had to play zone rather than hey we found a way to win the game lets play zone. Coach Self has a problem with that as he totally resents playing zone.

I remember a few years ago Coach Roy from North Carolina when his team was having problems didn't realize the other team was playing zone. Swallow your pride and play whatever works.

The front court has been bad. It was real bad last night. That said, it should and will get better. The real question is how much better? Lucas playing like he did during conference season last year would help. Azubuike oozes potential, but he clearly hasnt found it yet. To me, if Bragg would look like Bragg of last year, it'll help Lucas, Azubuike, Coleby out tremendously.

As stated last night, Lucas benefit from Ellis getting either doubled or shaded defenses towards him. Opened up spaces for put backs and rebounds. If Bragg cant replicate that to some level, Lucas simply wont be as effective. I'd say that rolls for the other bigs as well.

It's clear and awesome that Mason and Graham are what they are. But they're still going to have nights where they are cold and cant get it going. It's just going to happen. We need to find our front court before that happens.

I think the foul issues have bothered Lucas to the point where he is thinking too much. The officiating has been terrible this year, but I am confident he will figure it out with the help of the coaching staff. We would be a different team he could start playing like he did last March. Bragg so far has disappointed me (except for the Siena game) because he is not going for rebounds and runs around aimlessly - why he has not figured out his role offensively I have no idea. I have been saying that he, like Perry, is good in pick and roll situations because he can make mid range shots. I hope the coaching staff has an idea what he needs to do. BTW, have we even run any offense this season?

Perry's presence last year is completely irrelevant to Lucas' performance because the key to his performance isn't related to offense. That was Coach's message last week. Landon's role is to pass and set screens and rebound and make bunnies on misses.

Bragg will have offense setup for him and needs to contribute double figure pts plus some rebounds but no sane person is expecting significant O from Lucas. They tried that shortly after he became a starter last year but quickly went back to his role and did it well. We need that again.