Kansas forward Dwight Coleby (22) looks to take the ball to the bucket against Georgia forward Houston Kessler (24) during the first half, Tuesday, Nov. 22, 2016 during the championship game of the CBE Classic at Sprint Center.

Kansas City, Mo — After playing just three minutes, missing his only shot and grabbing just one rebound during Monday night’s 20-point Kansas win over UAB, junior forward Dwight Coleby was not quite sure what to tell his father.

No, it’s not that Dwight Sr. is hard on his son after bad games. Instead, the younger Coleby was disappointed that his father came all the way from Nassau, Bahamas to watch his son turn in that kind of night.

“I didn’t really know what to expect (with) him coming here to watch me play and I wasn’t playing that much,” Coleby said. 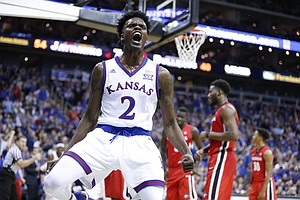 Good thing the CBE Classic was a two-game tournament.

After being a non-factor in KU’s first win at Sprint Center, Coleby was what KU coach Bill Self called “by far” the team’s best big man during Tuesday’s 65-54 victory over Georgia in the championship game, earning Coleby praise from his teammates, coaches and the KU fans and his giving his father a big smile.

“I know he was happy,” said Coleby, unable to erase the grin from his face. “I finally had a game where I played that much.... It was great.”

Not only were Coleby’s numbers nothing to write home about. They might not even have been worth the ink and paper for a note to slide under the door at his father’s hotel near Sprint Center. Two points, four rebounds, four blocks and five fouls in 20 minutes. By most standards, that’s an average night at best.

But for a guy who transferred from Ole Miss and sat out an entire year while nursing a knee injury that put him even further behind than the transfer season already would have, those numbers were like hitting the lottery.

And the KU fans knew it. Each time Coleby exited the floor Tuesday night, the fans stood and cheered, with the roar growing louder each time.

“You think about it; he got four blocks, but he gets two points and four rebounds and every time he checked out of the game, the fans all cheered for him," Self said. "What other bigs did they cheer for when they checked out of the game? And it’s all because he tried. He played with energy and that kind of stuff. I don’t think it’s that hard to please our fans if you give great effort and play intelligently and he did what he could tonight.”

Still a bit of an unknown player on this team, Coleby said hearing the fans’ appreciation for his efforts made all of the hard work and frustration from the past year-plus worth it.

“It’s a great feeling,” he said. “I haven’t been playing since last year and it was exciting to see the fans want to see me do good.” 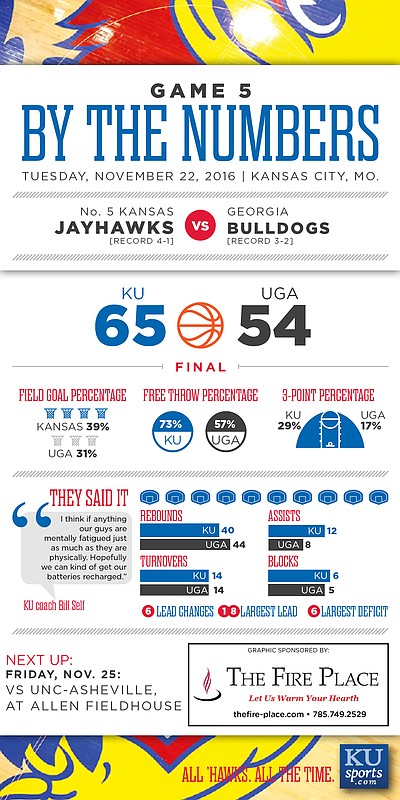 Let's hope he continues to get healthier. The opportunity is there for him.

Happy for Dwight and his dad. Good stuff.

Things to remember include his lateral quickness and ability to use his hands to poke away interior passes. Definitely had his wits about him and hustled back on D many times. Thanks, man.

My Uncle Lucas recently got Nissan Frontier from only workin part time on a computer. over here>>>ebuy32.com

great game by Colby and our back court, and Josh. Lucas, Bragg still struggling. Dok had foul problems too. It may be time to sit Lucas to see if that can motivate him.

I think a lot of Lucas' problems have to do with the way officiating is going early in the season. The zebras are trying to stop physical play, the exact kind of play that has made Lucas successful. I think he's at a loss as to how to overcome this and I can't blame him. Hopefully he'll figure it out and the stripes will back off like they usually do after over-pushing their new mantra each new season.

Interesting how some players, regardless of their height, play small or big. Lucas is taller than Dwight and he seems to make himself small. Colby makes himself look bigger somehow. You could feel his energy and effort in contrast to this funk LL is mired in. Maybe it is the foot injury. If so, I think they should talk about it so the fans can better understand what is going on with this guy. LL is giving off bad vibe while Dwight Colby had some mojo going and thank goodness. I do not know why they keep referring to Mitch Lightfoot as a big. Maybe in two years. He is a tweener (and a light one) at best but does not have the skills or girth at this point to play with the big boys inside. And Carlton just doesn't seem to like physical contact. I have news for the young man. Either get used to it or get used to the D-League. Josh Jackson is the real deal and has the potential to wreck havoc with anyone who runs zone at us with his explosiveness and passing skills in the middle.

Lucas's biggest problem is himself..... he's in his own head, overthinking. He also has had to adjust to a different tempo and a different game approach than in years past. This year, more than any other, we have moved away from the high low offense we run. He was able to patrol the paint and play within the flow of the game. This season we are about speed and big play on the perimeter. It's a different team this season compared to last year. Perry and Mari are not there to help take some of the pressure off of him inside and provide that experience in our front court to calm the other bigs. He'll adjust, he's too smart of a player not to.... but I'm not shocked he is struggling right now. We're going to need him as the year goes on. Our rebounding from our bigs is crap and that is what he does best. If we get to January and he's still lost, then I will worry.

Very good, Brett. Anyone who has tried to come back from a serious injury knows how difficult it is, perhaps mentally more than physically. To see Dwight get some "props" is very rewarding.