Josh Jackson learning it's better to drive than dance 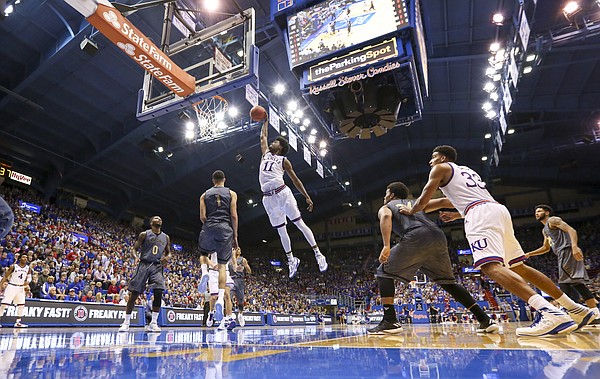 Kansas guard Josh Jackson (11) soars in for a jam over Emporia State forward Stephaun Limuel (1) during the second half, Sunday, Nov. 6, 2016 at Allen Fieldhouse. by Nick Krug

For all the hype he received as a high school prospect, Kansas freshman guard Josh Jackson will tell you days ahead of the Jayhawks’ regular-season opener he is more pupil than alpha male. Just a basketball player easing his way into the offense.

Sunday night at Allen Fieldhouse, where No. 3 KU cruised, 104-62, in its final exhibition, Jackson only made one of five first-half field goals before finishing with 11 points, seven rebounds and five assists.

It at least seemed to the 6-foot-8 future NBA lottery pick from Detroit an improvement on a scoreless first half in the Jayhawks’ first preseason romp. At this point, Jackson said he finds himself trying not to think about making too many mistakes — particularly after turning the ball over five times earlier in the preseason, against Washburn.

“I’m trying to play just as good in the first half as I am in the second, but I’m just tying to ease into the game a little bit,” Jackson said after shooting 4-for-9 from the floor and 2-for-2 at the free-throw line versus ESU. “I’m a newcomer. I’m a freshman trying to learn what Bill Self wants me to do, and what he doesn’t want me to do. Just taking all the information that he’s giving me in and tying to do the best I can with it.”

Ask Self, KU’s 14th-year head coach, if Jackson did a better job of avoiding turnover issues and he’ll cut you off at the pass — “He had one. He had one bad one,” Self pointed out.

And then the coach laid out a lecture you sensed he already had delivered to his highly acclaimed freshman, on the subject of giving away possessions and how best to attack a defense.

“Well, the thing about Josh, he gets himself in trouble, in my opinion, when he dances with the ball too much,” Self began. “There’s only really two guys on our team that have the freedom, in my opinion, to dance with the ball, and that would be Frank (Mason) and Devonté (Graham). With Sherron (Collins) back in the day, we let the ball stick with him, because he was so good off the bounce, but most other guys we’ve had have been ball-movers or straight-line drivers. And Josh will be much better at dancing with the ball when he learns to drive the ball straight lines and force help. Because a lot of times in high school, that was how they played — isolation, dance with it to go get your own shot. I’d rather drive it downhill.”

Midway through the second half, it appeared Jackson already had absorbed those instructions from his dance instructor. The freshman began his drive near mid-court with his left hand, made an extravagance-free drive to the paint and exploded for the kind of one-handed jam the fans inside the fieldhouse expected out of their latest one-and-done Jayhawk.

Admittedly excited about the slam, Jackson tried not to let his emotions overtake him in the moment.

“It wasn’t a statement dunk — I wouldn’t say that,” Jackson told reporters. “But it definitely felt good to get my first dunk in Allen Fieldhouse in. I just felt like it was a good play.”

A couple minutes after the slam, Jackson rose up to make a three-pointer from the right wing, again reminding those in attendance of what he could become before his time at Kansas concludes.

With most of his worries focused on upcoming showdowns with Indiana and Duke, Self won’t squander much time agonizing about Jackson’s development and impact.

“Josh just needs to get a little rhythm going,” Self said, “and I think he kind of did that better tonight.”