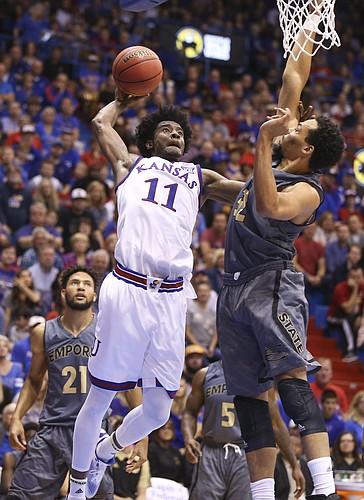 Kansas guard Josh Jackson (11) pulls back for a near dunk against Emporia State forward Jawan Emery (32) during the first half, Sunday, Nov. 6, 2016 at Allen Fieldhouse. Emery fouled Jackson on the play. by Nick Krug

The turnovers were down (11), the shooting percentages were up (61 percent from two, 39 percent from three) and KU was so, so good in transition all night. Another sub-par night at the free throw line (21-of-32) accounts for the minus.

Several Jayhawks had active hands all night, both when guarding the ball and in the passing lanes, and the home team got nine blocked shots from five different players, led by three from Udoka Azubuike.

The rebounding was better — especially in terms of effort on the offensive glass — but Landen Lucas was still pretty quiet (though aggressive at the start of both halfs) and Carlton Bragg had another rough night.

Frank Mason picked up where he left off in the exhibition opener to set the tone and Sviatoslav Mykhailiuk, Devonte’ Graham and Josh Jackson joined in from there.

Sviatoslav Mykhailiuk and Udoka Azubuike contributed 30 points in 37 combined minutes and delivered a good chunk of KU’s highlights in this one, from behind-the-back passes in transition to monster flush after monster flush on alley-oops from teammates.