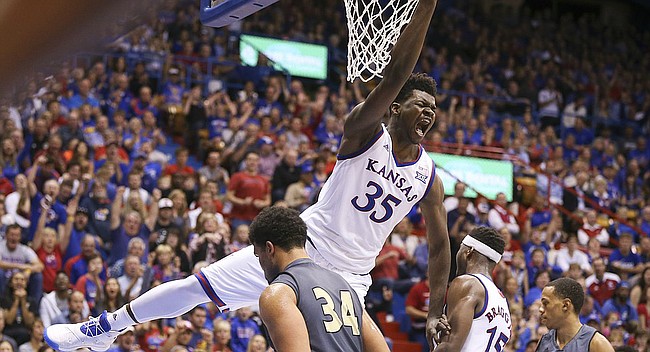 Kansas center Udoka Azubuike (35) roars after finishing a dunk off of a lob against Emporia State during the first half, Sunday, Nov. 6, 2016 at Allen Fieldhouse.

If Washburn played the role for Kansas of a sparring partner with a strong chin, Emporia State stood in for a heavy bag, repeatedly slammed without the means to fight back.

Just as ranking a prize fighter after seeing him beat up on a stationary object makes no sense, judging heavyweight college basketball programs based on how they perform vs. Emporia State reveals little.

But that doesn’t mean it’s not an enjoyable exhibition to watch, particularly when the basketball has been lobbed in the air and KU freshman center Udoka Azubuike, a 17-year-old, 7-footer with extra-long arms, sure hands and an ability to track the ball well, is in the vicinity.

Kansas dunked the ball a dozen times during Sunday night’s 102-64 rout of Emporia State, and half of those were flushed by Azubuike, including four in the second half.

“Pretty much the dunk where I just caught it out of nowhere and I just got the crowd hyped up,” Azubuike said. “That was nice.” 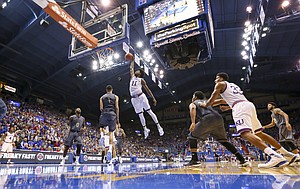 Yes, it was. So is Azubuike.

He has years to go before earning mention in the same breath as fellow Nigerians, Houston Rockets Hall of Famer Hakeem Olajuwon and former Chiefs running back Christian Okoye, but he shares their humble, likable natures. And Azubuike has the potential to become quite famous himself.

“He’s someone that not very many people can match as far as a big body and athleticism,” Kansas coach Bill Self said. “If he could continue to get better, hopefully by conference season, or midway through conference season, he could be really a good player because right now he’s so green and raw.”

Such rare raw material in so many ways.

And his humble nature will enable him to improve steadily because he won’t veer off the path by fantasizing about taking his game to the perimeter. To do so would be to stray from where he has the biggest advantage.

After a 104-62 exhibition victory over Emporia State in the final tune-up before the regular season, Kansas basketball coach Bill Self discusses his team's rebounding edge, four-guard lineups and strong play from freshman Udoka Azubuike.

Teammate Carlton Bragg shared that Azubuike recently, “reached up and touched the rim when his feet were still on the ground,” and added that he never played with someone who so enjoys dunking.

“You throw it anywhere and he’ll go and get it,” Bragg said. “He can jump really high, and the other day he was touching the rim and his feet were still on the ground.”

Self praised Azubuike’s effort Sunday, but also put it in context.

“Udoka is really one of the better lob catchers around. He’s good at that,” Self said. “I think he can be a really good player, but we shouldn’t be giddy about catching lobs because in reality when you get into league play or the next week that we play (vs. Indiana and Duke), those plays aren’t going to be available to you as much. You’re going to have to earn your points, but he’s getting better at that, too.”

Ideally, a few stepping stones between Emporia State and Indiana would be nice, but when you can touch the rim without getting off your feet, nobody is going to feel sorry for you getting tossed into the ring against heavyweights so soon. It will be interesting to see how he handles the early challenges.

This will be such an intriguing season with one big theme: development. Does Svi take a big step? Does Lagerald? Does Carlton? Will Udoka do as Self hints - become a major factor later in the season - right when we need him? And, of course - Jackson. If all of these guys take big strides this year, holy cow, this team could be lethal come January.

What should we call him? Udoka the Bazooka? Big Dok? This guy is as scary good'oka! Can't wait to watch KU beat the crap out of the Dookeis and Hooseirs..!!

Around my house we've been calling him the Mountain.

Only one nick name will do... U-DUNK-A

we've got a winner!!

Udoka Azubuike is only 17? Wow. He might be a better player than Josh Jackson!

Bryce, curious as to how you define a "better player"? Usually that means one has a complete game. I too am excited about Udoka's athleticism. For a big man he runs the floor well, has soft hands and looks to be a rim protector. As we all know the flush off the lob will be much tougher against quality opponents than it was against the 6'7" Hornets. He needs a 10 foot game around the basket which he will hopefully learn. Once again he is a beast and the sky is the limit for his potential. However Josh is the complete player now.Udoka might become the best big man at KU since Wilt, but for now lets let him develop his skills under HCBS and reign in our high expectations.

I base that off of what I saw in the Washburn game that I watched and the Emporia State game that I listened to. Jackson has been shaky and inconsistent; Azubuike has been lights-out good.

He was inconsistent against Washburn, but played well against ESU. He played well in the "team concept" against ESU. He is unselfish in that he doesn't have to have the ball in his hands all the time right now, although we might need him to control the pace later against the stronger opponents. Udoka right now does 2 things well,finish off the lob and rebound. Currently Josh has a complete game while Udoka is freakishly athletic for a 7 footer, with rudimentary overall basketball skills.

Doke will stick around long enough to get in great shape and learn the game. Raw jock. Fun kid.