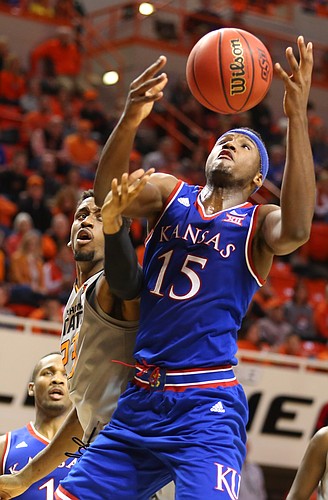 Kansas forward Carlton Bragg Jr. (15) fights for a rebound with Oklahoma State guard Leyton Hammonds (23) during the second half, Tuesday, Jan. 19, 2016 at Gallagher-Iba Arena in Stillwater, Okla. by Nick Krug

1 - Carlton Bragg: Other than getting into foul trouble (four whistles in 11 minutes), he had a strong night. He’s a terrific mid-range shooter and is making the close shots he was missing earlier. Had eight points, four rebounds and a steal.

2 - Devonté Graham: Totaled 10 points and five assists and had just one turnover.

3 - Landen Lucas: Kansas played better defense when he was in the game, although his lack of quickness was exposed at times. Contributed five points and five rebounds in 13 minutes.

5 - Frank Mason III: Played 34 minutes without an assist and couldn’t keep Jawun Evans in front of him. Scored a team-high 14 points.

6 - Wayne Selden Jr.: Shot was off (1 for 4 three-pointers) and finished with seven points, two rebounds, two assists and three turnovers.

7 - Cheick Diallo: Makes astonishing, as in astonishingly good and astonishingly bad, plays. On one startling defensive possession, when the play was to step up, he retreated out of bounds. Started and played 13 minutes. Produced four points, two rebounds and a steal.

8 - Lagerald Vick: Played eight minutes and turned it over just once. Made his only shot, a three-pointer. He has made 5 of 10 for the season.

9 - Svi Mykhailiuk: With Brannen Greene sidelined by a knee injury, Kansas needed a big shooting night from Svi. Teammates set him with open shots, but he couldn’t hit them. He made just 1 of 5 three-point shots and was 1 for 7 overall.

11 - Hunter Mickelson: Played two minutes and had an assist. 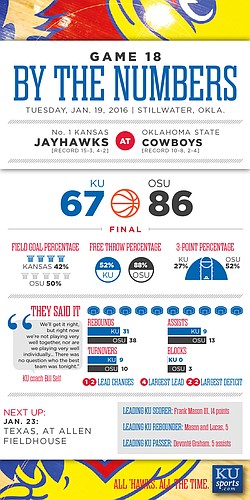 Some games, maybe you need to find a metric to cut off the accumulated points earned, like tonight shut it down after Bragg.

0 assist from the leader of the pack. enough said. No, let me add: open your eyes, Mr. General. Yes, you, Mr. Mason. You've got to focus on finding your teammates, get open shots, signal them to cut, back door, screen, ready to receive a lob pass. Forget about trying to score all the time. So many times have I seen Diallo was ready to jam, but you just pass the ball to perimeter. You got to watch how LSU play. They make our play looks like a high-school team. Our coaching staff really needs to sit down and rethink how they can compete with the rest of colleges. Not only in recruitment. These past 1-2 years, programs like TAMU, SMU, Xavier, etc. have been progressing so much with their juniors, seniors leading the way. We are in the downturn trend now. Yikes.

Are you sure Mason shouldn't just dribble into the paint, get double teamed and then throw up a prayer off the glass? It seems like that is what he does best.

Would have worked when we had the likes of Withey, but we can't rebound.

Am I the only one that sees that Mason is trying to play through some sort of injury when he shouldn't? Its not just an attitude thing, you can see his quickness isn't there. I may just be trying to justify it, but I really think he's too proud to admit he's injured.

He's clearly injured. Self never likes to fully disclose injuries, however. I understand why he doesn't, but it also leaves many to question the efforts and abilities of the injured player.

When your top-rated player played 11 minutes is when you know you are in trouble.

Enough with the "his lack of quickness was exposed." Most college teams have a big man quickness liability. They play with it. It's called getting position. It's also called preventing dribble drive where he's your last/only line of defense.

Overall we are just not good. This is now and real.

Overall we are not good at shooting inside or out showing we can't hit jumpers, hit on drives to the basket or make bunnies.

Overall we are not good at rebounding because we don't block out or really scrap.

Overall we are not a good free throw shooting team.

Not good on defense inside or out. Is there anywhere else? Lol.

All the rest are just kind of serviceable from time to time. No real development year to year above what our competition does.

Freshmen are making strides but really slowly on both O and D.

Just a team in the middle of the pack who likely will play .500 ball the rest of the way.

Leadership or coaching is informing the players what is expected of them. Then it is up to the players to meet those expectations.

Every program goes through down cycles. So here we are.

There were clues that this down-cycle was coming when we started relying on EJ and Naadir, when our OAD strategy failed miserably, when Danny left, when our assistant coach lied about his DUI, when we missed on Buddy Hield, Frankamp left, Cliff's parents cheated, Cheick was ineligible, Brannen threw a tantrum.......

Embarrassing, humiliating etc. Let's just disband the program and take solace in the success of our football program.

You can't make sweeping claims saying we aren't that good. This team has played and can play at a very high level. The last few games they haven't. The capability is there but their desire is what is lacking. Last night I saw 5 individuals on the court that were not playing as a team.

I don't believe any of the theories about the team being under so much pressure trying to win 12 straight either. They came here knowing there would be pressure and those kids wanted to be a part of a top notch program to compete at the highest of levels. Well here we are and they have that chance. They need to step up because last night was embarrassing. I don't remember many games where you just see no effort and the game isn't fun to watch but last night was one of them. Act like you at least want to win. We should have had an advantage last night inside with Perry and we jacked up shots and drove to shoot instead of driving to pass. They had no focus or desire. At least afterward Self said he was part of the problem.

I made the claims knowing it would be challenged. All your points are valid. This is the way that Kent R sees it this morning and really since the OU game and I have a bad feeling after that and since. I hope to heck I'm wrong.

Keegan, the ratings tend to be over-indexed toward the offense. If you look at Graham's play and how hid did not rotate to protect the passing lane, played three feet off his player, and didn't slide into position for rebounds, his ranking should move faster than his defense into a lower position. Saying this...I like Graham. His focus isn't there 100% of the time. Would like to see you include defense as an equal part of your analysis.

There is a name for Self's offense: PRIMITIVE.

Ouch. Painful, but you speak the truth.

I did see a number of times our guards got some penetration and could have dished to Diallo, but instead kicked it out for a potential 3, then that player hesitated and the cycle continued.

It seems we are more successful driving from the corner. Not taking the 3 in rhythm and then forcing one later because of shot clock concerns is a recurring theme. You are so right.

Saw the same thing in the Tech game. Our guys aren't as quick with the trigger as you would think. More passes don't always equal a more open shot and then you have the clock to contend with. In any possession you may only get one open look. And yes, the whole point of having your guard in the paint is to feed to the big guy. That 3 point shot is reserved for when you have a hot hand.

Going 13/25 at the line IS a stat than can be controlled fairly easily. I would think more practice time, spent on free throws, might pay off big benefits in close games!