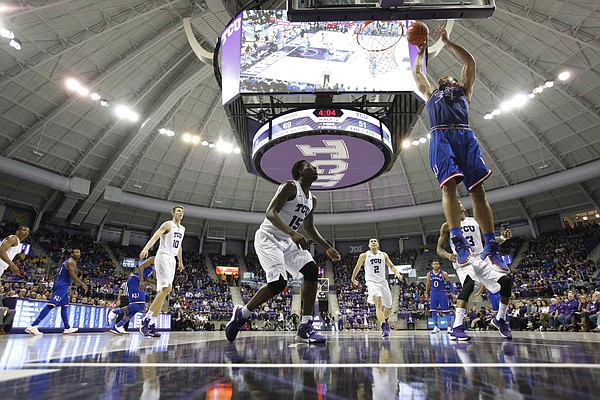 Kansas forward Perry Ellis elevates to the rim during the second half, Saturday, Feb. 6, 2016 at Schollmaier Arena in Forth Worth, Texas. by Nick Krug

1 - Perry Ellis: His strong senior season continued with a ho-hum 23-point, 10-rebound performance. Too quick and efficient for the Horned Frogs to handle, Ellis made 11 of 12 two-point field goals. He missed both three-point attempts.

2 - Devonté Graham: Hustled his way to multiple floor burns and played with a contagious enthusiasm on his way to 15 points, four rebounds, three assists and two steals on a day he did not turn it over.

3 - Jamari Traylor: Scrapped his way to six points and seven rebounds in 15 minutes before fouling out. Grabbed five offensive rebounds, which means he rebounded more of KU’s misses than any other Horned Frog did.

4 - Frank Mason III: Made just 1 of 5 three-pointers and had three turnovers, but was active defensively and dished six assists.

5 - Wayne Selden Jr.: Battling the flu, his shot was way off (1 for 5, 0 for 4 from three), but his physical defense gave TCU problems and he had five assists and just one turnover.

6 - Landen Lucas: Guards did a great job of feeding the post and although he didn’t always finish, Lucas did make 4 of 4 free throws and both field-goal attempts on his way to eight points and three rebounds in 17 minutes.

7 - Cheick Diallo: Was extremely active during his 10 minutes on the floor. He grabbled five rebounds, scored two points, blocked a shot and had a steal to go with two turnovers. Whistled for two personal fouls, both avoidable.

8 - Carlton Bragg: Snagged five rebounds, including one off a teammate’s missed free throws, in 10 minutes.

9 - Lagerald Vick: Knocked down a three from the right corner after Bragg snagged a missed free throw and fired a pass to him.

10 - Svi Mykhailiuk: Had wide-open shots and couldn’t bury them, making just 1 of 3 three-pointers and missing both shots inside the arc. One of his stints on the floor ended quickly because of shoddy defense.

11 - Hunter Mickelson: Played two minutes and picked up an offensive rebound, a missed shot and a personal foul.

12 - Brannen Greene: His two appearances on the floor added up to one scoreless minute. Benched for lazy defense seconds into his first appearance on the floor.

Mykailiuk is soooooooo frustrating to watch play. He has plenty of talent, intelligence (BBIQ), a great looking shot and hustles. However....he misses so damn many open 3s! If Mykailiuk would suddenly start converting 40% of his 3s, Jayhawk Nation would be elated.

I just wish Svi would consistently defend like he did against K-State. Sometimes, I forget that he is just eighteen years old.

About Greene: Played one minute with two different entries. Was this more punishing than a one game suspension. I noticed that Coach was somewhat critical of play even though the team was comfortably ahead. Watching on TV there was very little encouragement or approval of successful plays. Maybe his comment about being emotional causes him to make sure the players were reminded of mistakes if they occurred. Tuesday against WV better be ready and everyone working together for a victory.

There was a timeout when all the players are huddled around the coach and I saw Brannen on the perimeter not paying attention. Maybe as others have suggested he does have A.D.D.

Ellis has been much more consistent this year than last (although still room for improvement). He is much better at boxing out this year.