Kansas forward Perry Ellis (34) and forward Jamari Traylor (31) defend against a shot from TCU guard Brandon Parrish (11) during the second half, Saturday, Feb. 6, 2016 at Schollmaier Arena in Forth Worth, Texas.

Fort Worth, Texas — Dismayed after a “soft” rebounding effort on Wednesday against Kansas State, Kansas University coach Bill Self singled out some of his veterans in practices leading up to Saturday’s TCU game.

“He challenged me to be more energetic. He said I wasn’t bringing it,” KU senior forward Jamari Traylor said.

The 6-foot-8 Chicago native responded with seven rebounds and six points while playing 15 minutes in the Jayhawks’ 75-56 win in Schollmaier Arena. 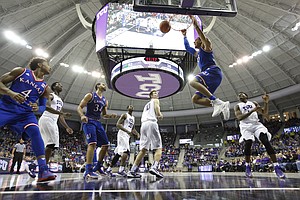 “I tried to respond by being more active the last couple days at practice,” Traylor added.

He admitted Self knows how to bring out the best in him.

Of Cheick Diallo and Carlton Bragg, who had five boards apiece, Self said: “I thought Carlton did good on the glass. Check did some good things. I don’t know if you’ve noticed, but Cheick is not the best passer. We’ve got to do a better job of keeping him close to the basket in certain situations.”

That was the Jamari we've been waiting for the last couple of years. Keep bringing that energy!

I thought the whole team just seemed to be much more energized today than recently. It backed off in the 2nd half a bit, but overall, much better. Jamari was bringing it today. This just doesn't seem to be a team where one guy is going to do it night in, night out, like Buddy at OU. It seems it is different guys each game. That's a good thing, and can be a bad thing.

Have to agree with you Humpy, I said to a friend they actually played today with some energy, emotion, a little fire. During this time span they had just seemed almost dis-interested, lifeless but today was better. Much better job on the boards.

As we all know, Jamari was a 'late-comer' to basketball, and he has the fire/moxy to be coached and accept his role, limited as it is. Kudos to him for being about the team and wanting to contribute any way possible. You don't see any pouting or snotty resentment from him. Got to love him in all his rough glory. He has sparked this team more than once and doesn't get enough credit because he is limited but works his butt off. Yea, Mari!! Oh yeah, I read he has already graduated and is the first in his family to earn a college degree. More kudos.

Mari, that's the way to use those legs! Just jam it, Mari! Jump and jam, Mari!