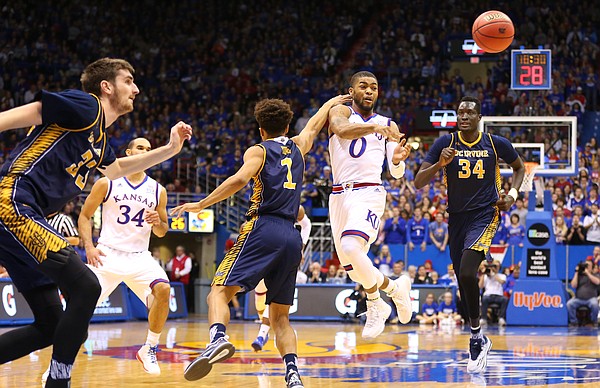 Kansas guard Frank Mason III (0) throws a pass to the wing around UC Irvine guard Alex Young (1) during the second half, Tuesday, Dec. 29, 2015 at Allen Fieldhouse. by Nick Krug

1 - Frank Mason III: Did a nice job of using quick hands to lend disruptive help to post defenders and played another tidy, high-speed game in both halves. Had 13 points, six assists and three steals.

2 - Perry Ellis: Had one point and seven rebounds in the first half and finished with 14 points and nine rebounds.

3 - Wayne Selden Jr.: Redirected a ball in mid-air for a 50-foot, on-the-money pass up court to Devonté Graham, one of Selden’s many terrific passes. Add quarterback to the list of positions he could play well in football, joining linebacker and tight end. Chose the right sport though and again did a little bit of everything to help Kansas win. Totaled eight points, seven rebounds and five assists. Seems to be jumping higher than ever, an indication he might be healthier than ever.

4 - Devonté Graham: Shot better in the first half, making a trio of three-pointers, and distributed the ball better in the second half, picking up all three of his assists.

6 - Hunter Mickelson: Looked about 6-foot-2 and 12 years old when standing next to UCI’s 7-foot-6 center, Mamadou Ndiaye, but played well. Had six points, two boards, a block and two assists in 11 minutes as a starter.

7 -  Brannen Greene: Was aggressive enough to shoot 11 free throws in 18 minutes, but missed three of them and both of his three-point attempts.

8 -  Cheick Diallo: Scored six points, had two rebounds and made all four of his free throws. Also threw a way-too-high pass out to the perimeter for a turnover.

9 - Jamari Traylor: Picked up a point and a rebound and took an elbow to the head on a play on which he was whistled for a foul.

10 - Lagerald Vick: Hit a three-pointer to the delight of the crowd. 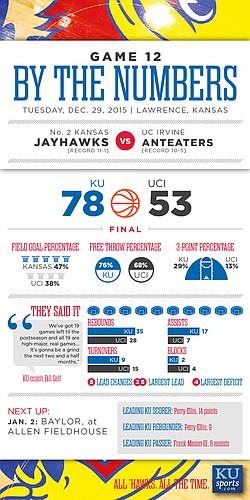