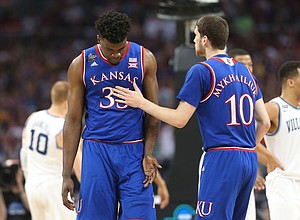 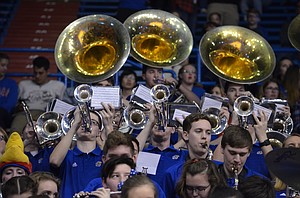 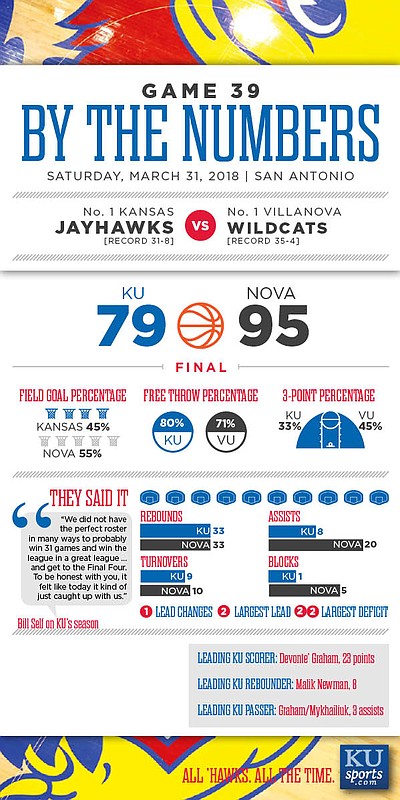 After the 22-4 blitz, we played them plus 2 for the rest of the game. Michigan's center better at least have a game similar to his game against Loyola for Michigan to have a chance.

I do agree with you, though, when you say that this loss should not take away from the accomplishments of the season. This motley crew of Jayhawks, with a depleted roster, a super-thin front court, and three bad losses at home, still found a way to win the Big 12 for the 14th straight year (and won it outright), won the Big 12 Tournament with Udoka sidelined by injury, and finally broke Bill Self's Elite Eight hex with that crazy victory over Duke. Most teams that had the issues we had could only dream of doing what we did and would kill to be playing in college basketball's final weekend.

That we made it to the Final Four at all is a testament to so many things - to Devonte Graham's leadership, to Malik Newman's emergence, and most of all, to Bill Self's coaching and finding a way to do more with less. Despite last night's sorry showing, I will always remember these Jayhawks in a positive light. You did me proud, Kansas. You proved me wrong most of the year. Congratulations.

Here's to redemption in 2019 and cutting down the nets in Minneapolis!

THANK YOU PEORIA FOR THE MOST RELXED COACH IN THE TOURNAMENT!

The team sure relaxed before the last game. Am I the only one who knows pot throws your spatial orientation off? Many of our shots were off 3" in 17 feet! Most of them hitting the front edge of the rim. Better luck next year.

Love that last bit. Bill admitting we didn't have a super talented roster but still we went farther than anyone including he expected. Next year, if we don't win it won't be because of personnel. And with KC hosting the Sweet 16 and Elite 8 again, we have a great chance of making it to back to back Final Fours for the first time since 2002-03.

I hope you're right. I don't want to wait six years before our next Final Four appearance.

Very proud of these guys...hated watching that game last night, but only because we could never get back in it. Hats off to Villanova for keeping the pressure on the entire game. Would have been interesting only if 'Nova shot 40% from three instead of 45%...12 points off the board might have made a game of it. As coach said, they never suffered and game pressure. We had a few moments (very few), where a big make would have let them know we were there, but we really never hit even one of those! I can't remember a game where there was absolutely nothing to cheer about after Dok's first shot. One good thing though, scream therapy must work, as I am very docile today. After all of that, reflections of this team are all good. They really fought and somehow pulled off another Big 12 Championship! Rock Chalk Jayhawk, Go K U!!!

1] Getting to the Final Four.

2] Dok seeing and playing in front of his Mom for the first time in 5 years.

3] Silvio giving us a preview of the monster he will become in the not too distant future.

4] Beating Kentucky, Syracuse and Duke all in the same year.

5] Gaining on Kentucky for All-Time victories [only 12 behind].

6] Extending our lead for All-Time victories over North Carolina [12 ahead].

10] Maybe not so unexpected, but looking like next year's team will be even much more talented.

If Malik and Dok stay we have a shot at a final four next year , otherwise it's not gonna happen. Experience > young talent, this year's team proved it.

Most of us realize that the success this year was far beyond expectations. Yes it is disappointing but appreciate what success we had. As for next year it appears going to be great. Recruits coming are going to be great. Udoka shouldn't be leaving and he has competition to play the post. Garrett needs to become a scoring player rather than a simple passer. The transfers will be big factors. Newman might leave but Vick should remain at KU.