‘As good of a team as I’ve ever seen’: Jayhawks knock out Toledo with dominant stretch in first half

Kansas guard Devonte' Graham (4) puts up a three against Toledo guard Jaelan Sanford (13) during the first half on Tuesday, Nov. 28, 2017 at Allen Fieldhouse.

You probably have not spent much time — if any — thinking about it, given the unlikely and ridiculous sound of such a thing.

But Tuesday night, at Allen Fieldhouse, during Kansas' 96-58 trouncing of Toledo, the Jayhawks showed you, the Rockets and the rest of the world exactly what a 32-3 run looks like.

Senior point guard Devonte' Graham, who lit up the Rockets for a career-high 35 points on 14-of-19 shooting in 30 minutes, was responsible for most of the damage. At one point, deep in the second half, Graham himself, with those 35 points, had matched the offensive output of Toledo's entire team.

But Graham's red-hot night was merely the signature movement of the latest offensive symphony by second-ranked Kansas, which threatened to top the 100-point mark for a third consecutive game and now has won its last three games by a combined 124 points.

“I'm not a Kansas historian by any stretch,” said Toledo coach Tod Kowalczyk. “But, in 30 years of college coaching, that's as good of a team as I've ever seen. They're on ice skates and everybody else is in sneakers. They're just that fast. And they're so unselfish and move the ball.” 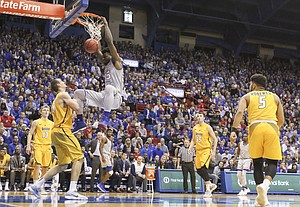 The knockout run started innocently enough, with, of all things, a Mitch Lightfoot jumper in the corner farthest from the Kansas bench with the shot clock winding down.

After a free throw from Toledo's Luke Knapke, Svi Mykhailiuk (15 points) got loose for one of his five 3-pointers in the corner on a swift feed from Graham.

The next three buckets — and, really, the entire night — belonged to Graham, who first hit a jumper near the top of the key then drilled a 3-pointer in nearly the same spot that Mykhailiuk hit his and, finally, gathered his own miss in the paint and went right back up, seemingly in one motion, for an easy lay-in.

A jumper from Toledo leading scorer Tre'Shaun Fletcher pulled the Rockets within 11, at 28-17, and momentarily gave the impression that this one still would be competitive.

But back-to-back, back-breaking lobs to Udoka Azubuike — one from Graham and the other from Mykhailiuk — pushed the Kansas lead to 15 and set the stage for a stretch of 20 unanswered Kansas points.

“Whatever they did, we just made a shot,” KU coach Bill Self said, referencing Toledo's attempts to change up its defensive looks. “I'm not sure it was good offense as it was just shooting the ball well.”

Mykhailiuk, KU's leading scorer entering the game, began to heat up at this point, knocking in two of his four first-half 3-pointers to push KU to the 40-point mark with more than five minutes still to play in the half.

“It feels good when the other team has to call a timeout to regroup from a run we're on,” Lightfoot said after collecting six points, four rebounds, a block and a charge taken in 21 minutes. “The ball was going in, Devonte' played amazing and it's pretty cool to be a part of that.”

It was at this point that Malik Newman (17 points) decided to get into the action. His layup and 3-pointer in a three-possession stretch, bookended another Graham 3-pointer and that sequence capped the 32-3 run that was finally and not-so-mercifully stopped when Toledo scored back-to-back buckets for just the second time in the game's first 33 minutes.

“It's always in your mind, like, 'If we can go on a run, we can get a little separation and get a comfortable lead,” Newman added. “But it's never, 'Hey, we're on a big run, let's try to keep it going.' It's always one stop at a time, one possession at a time. That's just how we go about it.” 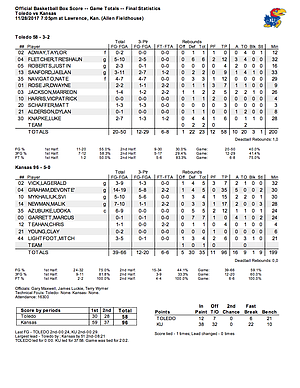 Most of what happened before and after KU's devastating run mattered very little anywhere but the stat sheet.

The victory improved KU to 6-0 for just the sixth time in the Bill Self era and brought the Jayhawks to the brink of the portion of their non-conference schedule that will look vastly different, starting with a showdown against unbeaten Syracuse on Saturday in Miami.

“We've done about as well as we can do, based on the games that we've played,” Self said. “But, you stop and think about it, you've got Syracuse, Washington, Arizona State, Nebraska, Stanford, to finish out our non-conference. There's no (easy) games in there. So, yeah, our schedule's just starting.” 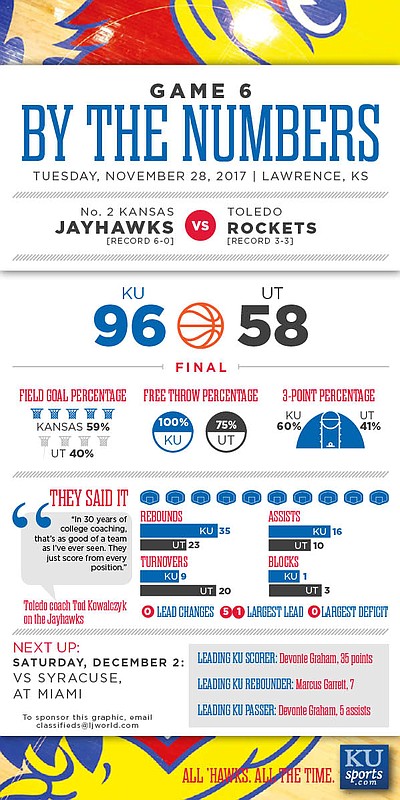 It's always nice to hear Self use "coach speak." Although we're certainly heading into a much tougher portion of the schedule, I would hardly call Nebraska a tough matchup.

Anyway, it was a truly remarkable performance, and it will be interesting to see how KU plays against stiffer competition.

BTW, on a completely unrelated note, the scoreless streaks on defense at the beginning of each half reminded me of the '01-'02 KU team, which I think may be the most under-appreciated KU team of all time. That was the only KU team to go 16-0 in the Big XII, in a pretty tough conference that year (which included Oklahoma also making it to the Final Four). In addition to that (and to having Hinrich, Collison and Golden), I believe they had at least FOUR times when they held another team without a basket for over TEN minutes. I can't remember ANY other team, KU or otherwise, doing that in a season. (And of course the next year KU made it to the championship game, only to lose the infamous "12-for-30" FT game against Syracuse -- which ESPN and others always erroneously refer to as Carmelo Anthony "carrying the Orange to the title.")

The only reason that '02 team lost to Maryland in the Final Four is because Drew Gooden had probably the worst game of his career. And yet, IIRC, KU was still within four points when Hinrich made a crucial mistake and traveled with something like a minute to go.

Maryland went on to defeat a nothing-special Indiana team in the championship game, and I think KU would have won that one easily.

I'm curious what others think about my assertion that the '01-'02 team should be considered one of the most underrated, if not greatest, teams in the history of KU.

I agree with you. I had to look up that season to confirm what I thought I remembered. Kansas took apart the Syracuse zone that year so much so that they (Syracuse) had to play man to man trying to get back into the game. Drew Gooden played near the free throw line and couldn't seem to miss over the Zone. A pleasure to watch that game.

Juan Dixon had something to do with the Maryland loss as well.

That was a monstrous team that deserved much better than it sadly achieved.

Agree. Have always thought this and was comparing these guys to 2002 last night. They just made everything. At some point this team will need to get some points from the post though. If I could ask for a Christmas present for these Jayhawks I'd ask for Azubuike to develop a counter move for the baby hook from the left block. They get that and hit the defensive glass they will be one of the best.

If I could ask for a Christmas present it would be a resolution to the Billy Preston affair.

Bryce, my friend, I think the resolution will be pray that the NCAA let's Silvio in early.

Yeah, it's been too long now and KU is going to play it very conservative.

After this amount of time and no word yet...on the ownership of a car no less...I can't imagine this ends well for Billy. I certainly hope I'm wrong, but good gravy, how long does it really take to track this info down. Unless, someone is not talking...

im greedy..i want Preston to be cleared to play AND DeSousa to be allowed to play in the 2nd semester..you have to go back to the 2011 team with the Morris Twins and TROB to find a KU front court with depth AND talent

A resolution that allows Preston to get out on the floor. To see another player possibly ruin his career a.k.a. Alexander for impermissible benefits would be devastatingly stupid.

Where the hell did the Rock Chalk chant go???

The environment in Allen Fieldhouse is not the same this year. I think it has to do with less students. It use to be filled to the rafters, yet not one game this year has been a true sell out based on the open seats. The students are what bring the excitement, energy, and deafen noise to the building and they seem to be pushed out. The crowd could not set any indoor sound levels records as more and more donors take over the prime floor level seats. It would be nice to give Allen Fieldhouse back to the student body (reference the student sections at Duke), but finances seem to be the only driving force. I have seen my ticket prices triple since 2013 to this season.

I haven't been to a game in a while.

And while I'm sure the level of enthusiasm has gotten worse over the years, my thesis for as to why this may be occurring is different.

A) KU has played a lot of crappy teams at home so far. Fans simply don't care as much about games against Toledo and Oakland.

B) Smart phones. Too many people (especially students) are more interested in updating their social media than actively cheering during the game.

Just did some quick fact checking and KU enrollment has gone up for the fourth straight year. That does include students enrolled across all campuses so no idea on how that plays into this.

Are there fewer tickets available for the student sections? Doing anything that negatively affects the atmosphere at the Fieldhouse is just dumb.

I noticed that also Phil......That is what KU basketball is best known for and not to hear it is just plain wrong.....BRING BACK THE CHANT!

KU basketball is best known for winning but yes, I've missed the chant also. Is there any reason for this or is the tradition waning?

The key to this team's success is the upbeat tempo, and the key to that is good defense and rebounding. When teams force us to play a half court game, that is when we are likely to struggle.

Hopefully, most teams will limit how many they send to the boards for fear of KU's fast tempo.

Once again, Coach Self and his staff are doing everything possible to accentuate the team's strengths and diminish their potential weaknesses. The real test will come when we only shoot a normal percentage, and we have to find other ways to win the close games. I have no doubt that they will find those ways, as they have been doing forever under Coach Self.