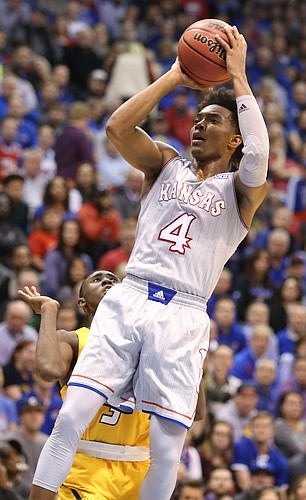 Kansas guard Devonte' Graham (4) pulls up for a shot over Toledo guard Marreon Jackson (3) during the first half on Tuesday, Nov. 28, 2017 at Allen Fieldhouse. by Nick Krug

1 - Devonte’ Graham: Scored a career high 35 points to go with five rebounds, five assists and two steals and did not have a single turnover. Graham made 14 of 19 field goals and 5 of 8 3-pointers. Also played well defensively.

2 - Malik Newman: Did a better job of driving to the bucket and had 17 points on 7 of 10 shooting. Added three rebounds, two assists and three steals. Made his only 3-pointer.

4 - Udoka Azubuike: Moving from left to right, he swept across the lane and put up a hook shot that went in, the highlight of a 12-point, five-rebound night for the big man off to an impressive start to the season. Committed just two fouls in 24 minutes.

6 - Lagerald Vick: Had one killer move, dribbling hard right, then wrapping it around his back left to leave himself with an open 3 that he knocked down. Other than that, not his best night. Made 3 of 9 shots and finished with seven points, five rebounds and two assists. Didn’t defend Toledo’s Tre’Shaun Fletcher to coach Bill Self’s satisfaction and was switched off of him.

Vick played like a freshman today. He just seemed to disappear in this game.