Perry Ellis has heard all the jokes, read all the posts on Twitter about how he looks older than he is and how long he’s been a member of Kansas University’s basketball team.

“So many people say I’ve been here forever and you know, they’re right. I got a chance to play with Wilt Chamberlain and Danny Manning,” the 22-year-old KU senior said in his Senior Day speech that followed his stellar 22-point, seven-rebound outing Saturday in an 85-78 victory over Iowa State in Allen Fieldhouse.

“Since I supposedly have unlimited eligibility, why don’t I just come back next year?” Ellis added to a thunderous ovation from 16,300 fans.

That’d obviously be great for KU, not so much the other teams in the league, who Saturday saw Ellis add another wrinkle to his game — floor burns. 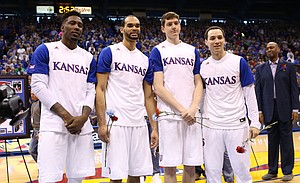 “I get on Perry quite a bit for not getting on the floor as much as what I think he should, but he did there at that point,” said KU coach Bill Self, who was moved to tears during an emotional post-game speech of Jamari Traylor (eight points, three steals, two boards).  “That was the biggest possession of the game. It was huge for us.”

“I just wanted to do whatever I could to try to get over that hump. I had an opportunity to get the ball and I did,” Ellis said of his dive on the floor and pass to Selden.

Graham, who hit four threes and scored 16 points, was thankful. 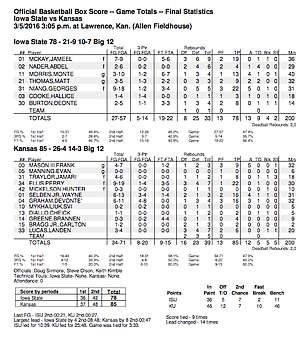 “We were up one and I came down and lost the ball and they were about to have a fast break. They would have had numbers. Perry dove on the play and we got two points out of it so it was definitely the biggest play of the game,” Graham said.

Selden, who hit three threes and scored 16 points as well, quickly found Graham underneath for the wide-open layup after Ellis knocked him the ball.

“I was wide open so I knew he would,” Graham said, referring to Selden delivering the ball.

Graham’s three from in front of KU’s bench was the dagger to defeat an ISU team that led by as many as four points with 8:48 left.

“We have a lot of confidence in him and he got the wide-open shot and knocked it down,” Ellis said of Graham, who had three assists on a day KU totaled 12 assists, just five turnovers.

Ellis earlier was hit with a flagrant foul that came just after Graham released his three that swished to erase an 63-61 deficit and give KU a 64-63 lead at 7:39.

Ellis elbowed Deonte Burton in the face while positioning for a possible rebound. Burton hit two free throws and Georges Niang scored on the ensuing possession to put the Cyclones up, 67-64, at 7:22.

“It was something unfortunate. I didn’t try to do that,” Ellis said. “In the moment trying to box out, I boxed out too high and hit him.”

KU’s late-game flurry — the Jayhawks outscored ISU, 15-7, after the final TV timeout at 3:25 — pretty much proved to be the story of the day.

“Coach said (in huddle), ‘This is our time. We have to win the last three minutes or so.’ We did that,” Ellis said. “We’ve been in that situation before. We have a lot of veteran guys and we did it.

“I never think that way,” Ellis added, asked if it crossed his mind KU might lose its first-ever Senior Day contest (KU is 32-0 on Senior Day throughout history). “I never have. It’s over when it’s over. I’m going to play until it’s over.”

He said it was an emotional day playing in the final home game of Ellis, Hunter Mickelson, Evan Manning and Traylor.

Before the game, he even thought about his short-but-sweet three-minute Senior Day speech, which included the Chamberlain/Manning age joke.

“About every day I see my face cropped on pictures from decades ago. I had to say something about it,” Ellis explained to media members, who were willing to play along.

So Perry, he was asked, “what was it like playing against Wilt?”

“I can barely remember. It was so long ago. It was good,” Ellis said, smiling.

KU will next meet the winner of Wednesday’s Kansas State-Oklahoma State game in a Big 12 quarterfinal at 1:30 p.m., Thursday, in Sprint Center in Kansas City, Mo. 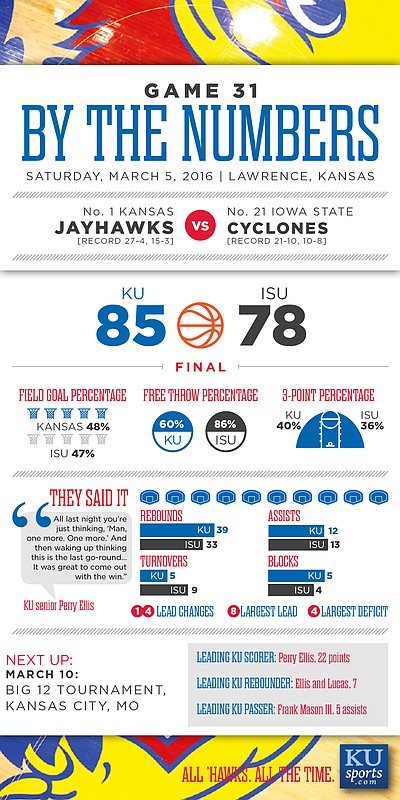 Phenomenal win for another undefeated season at home. Perry had a great game, and for those who have thought he should play with more passion, he even got a flagrant foul. :) Seriously this is an awesome senior class!

Personally, the only other years (in the Self era) I've felt this good about our team going into the post-season were 2008 and 2011. The Big 12 tournament should be fun to watch, and I guess we're still playing for the Midwest region (MSU would also want that region). Regardless of what happens in Kansas City though, I think we've locked up a 1 seed.

My heart says we can win the National Championship, but my head says our ceiling is the elite eight.

Free throws will be the deciding factor.

You're a fool, possibly even a buffoon. After viewing this game from the fourth row near mid-court –– this squad has all the pieces of a national championship team. "Elite 8 ceiling?" Yeah, you're a buffoon

All you Tubby Smith fans still voting him for Big 12 Coach of the Year !!

Great game. Great way to close it out.

Amid the joy of this great victory and really cool season, lest not forget or lose focus on our Achilles heels; free throws, dribble drive penetration defense and building on a lead and let's hope we can avoid our team Kryptonite, Michigan State!!!

Yahoo had an interesting article indicating KU is really looking good for recruiting the Class of 2017!! Can't we get this season over first? :)

Perry, Jamari, Hunter and Evan thanks for everything and thanks for keeping it classy.

P.S. George Niang, with all due respect to Buddy and Valentine, may end up being the best all around NBA player in this years draft, Thank God he's finally graduating!!

Poor FT shooting has been the Achilles Heel for several excellent KU teams. Duke, a team we may face in the Round of 16, is one of the many examples.

I hope 2017 recruiting shapes up well because 2016 is a bust. Jackson is MSU bound and The Thong will never play college ball.

Ellis may have a shot at the NBA due to his quickness, intelligence and ball handling skills for a guy his size.

It also would have been a lot less meaningful except for Wayne's court vision and pass to Graham.

Also gotta love Graham's humility in acknowledging the TO and appreciating his teammates.

Coach Self did an interview this week where he publicly challenged Frank regarding Morris. Love the Pit Bull.

32-0 on senior night? I had no memory of Kansas losing one but did not realize it never happened..

Imagine being Texas at home on senior night with Tony Romo in the house and getting beat down by 30...

We are lucky to have Kansas as our team...

Hard to see this KU team underachieve this year at the NCAA.

I truly believe all the let down the past several years has thought this team resiliency and made them stronger.

As most of you would agree, we're playing at a very high level right now. I also believe the coaches made the adjustment needed to put a complete and sound team on the floor.

I'm also going to pick Kansas to win the big 12 tournament. Hope to see Oklahoma one more time in the championship.

I stopped doing brackets and Kansas won a championship and been to another final. I pass on picking anything in the tournament.