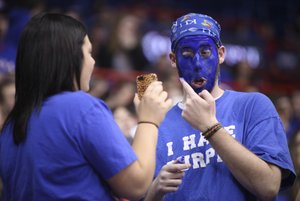 Bill Self on the performance of Travis Releford (16 points, 11 rebounds): “Travis played great. He has the best old man’s game of anybody I have ever seen for a young guy. Just think about when he is over 40 and playing. He is going to dominate. He drives in there and reverse pivots and does things that look awkward, but he does some really good things.”

Olive Vorse of Topeka attended her first KU game Wednesday on her 104th birthday. The KU student section behind the north goal sang “Happy Birthday” to Vorse before the contest.

“I love basketball more than the other sports. It’s exciting being here,” Vorse said before the game.

Thomas Robinson recorded his Big 12-leading 10th double-double, with 15 points and 14 rebounds. ... Releford had his first career double-double with 16 points and 11 rebounds. ... Jeff Withey recorded six blocks, which is the third time this season he has recorded six or more. ... Withey has 14 blocks in his last four games and at least one block in 12 of 14 games. ... Conner Teahan has made at least one three-pointer in nine-straight games and 12 of the 14 games this season. ... Tyshawn Taylor recorded one steal, which moved him into a tie for 21st place (Brady Morningstar) with 133 career steals.

Future KU guard Conner Frankamp scored 42 points to lead Wichita North to a 68-60 win over Wichita Southeast on Tuesday. Frankamp scored a Wichita City League-record 52 points as a sophomore in a double-overtime loss to Wichita Northwest. Future KU forward Perry Ellis had 23 points in helping Wichita Heights to its 49th straight victory, a 63-46 win over Carroll.

Nebraska...I actually had the same thought before I saw your comment. This kid can fill it up!

Can he play D? Because he won't see the court until that happens.

How could we be a +24 in rebounds and only have a "season-high 19 rebounds" according to the statistics listed above?

I believe it was 19 prior to last night. Had to re-read that one too.

I was really wondering what color socks McCluster was wearing?

Why... matching socks of course, silly! OMG, his belt was to die for too!

I love the old man game reference. I have always made it a policy to pick the old guys when they are present for pick-up games. They generally are in good enough shape to keep up (otherwise they stay home) and they always make the right pass, the right cut, the right shot, have good rebounding position, and play solid defense...fundamentals boys.

Of course, I'm kind of reaching the age of being an old guy, so I guess now its about protecting my own.

Olive Vorse, of Topeka---104 years old and at AFH cheering on the Jayhawks with a Jayhawk painted on her cheek. Lord bless her! Lord, my prayer is to make it to 104 and then, my next request is, "please somebody, drive me to AFH to watch my beloved Jayhawks! Rock Chalk Jayhawk, Olive---stay young at heart!

You said it, drgnslayr!

I live in Harrisburg, PA and our local sportscaster showed the story about Olive. Fantastic stuff. Rock Chalk!