Kansas guard Elijah Johnson smiles after hitting a three-pointer against Ohio State during the first half on Saturday, Dec. 10, 2011 at Allen Fieldhouse. 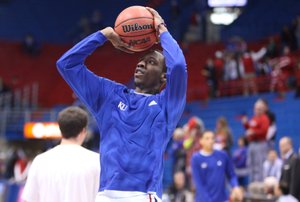 Kansas coach Bill Self talks to reporters following the Jayhawks' 78-67 victory over Ohio State on Dec. 10, 2011.

• No asterisk needed: Taylor, KU not apologetic for win over Sullinger-less Ohio State

• Matta to Self: 'Merry Christmas'

Now that under-appreciated Kansas University senior guard Tyshawn Taylor will miss time after he undergoes surgery to repair a torn meniscus of the right knee, it will be on Elijah Johnson to bring along freshman Naadir Tharpe.

Johnson’s a good one for the task because he can bank on what worked for him when he was the youngest, smallest guy on his team in Gary, Ind.

“Elijah was the first kindergartner to make a fifth-grade team in Indiana elementary school history,” said his father, Marcus Johnson, as he waited outside the locker room to congratulate his son on his performance in Saturday’s 78-67 victory against Ohio State. “When Elijah was in pre-school, I was coaching a high school team, and he used to practice with my freshmen, so he knew the game pretty well. It wasn’t like he was just a kindergartner playing with older people.”

Marcus, who lives in Las Vegas, where Elijah moved after seventh grade, picked a good game to see his son live for the first time this season. Elijah broke from a shooting slump and scored 15 points on 5-of-7 three-point shooting. That elevated Johnson’s season accuracy rate to .333, still not reflective of his ability.

“He’s a really good shooter, he just hasn’t shot it well,” ninth-year Kansas coach Bill Self said. “When you look at teams, everybody has issues, things not related to basketball. It was a big deal to him his dad got to see him play today. I just think little things like that make a difference. The kid’s struggling, he’s got a parent in the stands, and he was really good today. He was especially good in the first half.”

Johnson does what slumping shooters are supposed to do. He keeps shooting.

“I really try not to pay my shot any mind because when you think about your shot, that’s when it can go downhill for you,” Johnson said. “I never worried about my shot. I know I can shoot the ball, and I’m pretty sure everyone in Kansas knows I can shoot the ball. It just hasn’t been falling. I try to focus on guarding because I feel like it loosens you up. Today, I felt like I shot the ball like I had the last couple of games, and today they were falling.”

Even those who might crack that new Kansas football coach Charlie Weis should recruit Tyshawn Taylor to play defensive back because he’s so good at creating turnovers have to respect what Taylor did this week. One day after tearing his meniscus, he played 34 minutes in helping Kansas stave off a tough Long Beach State team Tuesday. Four days after that, Taylor had a career-high 13 assists (and seven turnovers) in 35 minutes to help KU defeat the nation’s No. 2 team, which played without No. 0, Jared Sullinger.

The break in the schedule enabled Taylor to delay the surgery so that he wouldn’t miss as many games. He put the team first and played in pain.

Without complications, Taylor should be back for the Jan. 4, Big 12 opener against Kansas State in Allen Fieldhouse, if not sooner. After the Davidson game, Kansas plays at USC (Dec. 22), and in home games against Howard (Dec. 29) and North Dakota (Dec. 31).

The forced experience will be good for Tharpe’s development. Taylor’s ability to score and defend will be missed. Johnson just might be heating up at the right time.

Tyshawn's play in both games this week is testimony we need to recognize.

We all question his judgement and loss of focus at times, but I have never heard (nor would I tolerate) complaints about his heart or guts. The guy is solid gold from neck to crotch, and working to get his legs up to par again may let him get more settled up top as well. He always makes more good plays than bad, and I look to see that keep improving.

There's a lull in our schedule the next couple weeks, and EJ has 'held the fort' before, but come conference time, we need TT as much as anyone on the roster. Nadir just needs to play the minutes that come his way – not to prove anything, but get the job done as long as he's needed. His time will come when it comes.

"The guy is solid gold from neck to crotch"

I havent laughed so hard in months! I have actual tears on my cheeks. What a beautiful characterization (and accurate). Too bad we cant Midas up those other body parts.

Ok ok, even though he's a turnover machine, I won't complain about Taylor having no heart or guts. But you know whose heart and guts need to be questioned? Our Superman Thomas Robinson. Before you all kill me on here, let me say that I love the guy and he's a great player. And last year my 6 year old sent him a "thinking of you" card after his mother died and then 8 days later Robinson sent my son an autographed picture, so he is absolutely my son's favorite person in the whole world. However, nothing makes me want to throw my remote control through the wall more than seeing him miss a shot and then stand there with that incredulous look on his face while the other 9 players on the floor take off in the other direction. You can have all the double-doubles you want, and sportscenter can say how great you are by scoring 20+ points and having big crowd-raising thunderdunks, but the selfishness to stand there and pout about missing a shot or pout about the ref not calling a foul while the man you're guarding runs down the floor for an easy, unguarded bucket--- that's NOT Kansas basketball. But hey, I guess I'm asking for too much. At least we're not Cincinnati or Xavier right?

No we're not. But for the record, T-Rob would destroy Yancy Gates. Cold hard fact

I was at the game and was very frustrated with his poor hustle in the game, especially the first half. Self was absolutely furious at his attitude and conduct. This isn't what we need from him and I am fearful he wants only ESPN highlights and looking to the NBA now. He needs to stop this grandstanding.

I've been noticing it more and more each game... It's like he's a kid just pushing his limits to see how much he can get away with...

Hopefully Self just destroyed him in the locker room at halftime. That was honestly just not acceptable in my opinion.

I wouldn't want any other head coach in the country, but the one thing that drives me nuts about Coach Self is that he doesn't hold a lot of his guys accountable. TT making middle school mistakes and going on a turnover spree, he stays in. Robinson not hustling down the court multiple times and costing us buckets? Stays in.

That's one thing I miss about ol' Roy. He'd yank someone in a heartbeat to make a point. I kind of miss seeing a wave of 5 guys come in for the 5 on the court... Accountability. Here's hoping Robinson gets his head straight and performs like we all know he can.

Loved Roy, Love Self. I also miss the hockey line changes that used to happen with Roy. They always made me chuckle, and I knew that the starters were about to get a giant earful!

I noticed the same thing in many games this year, but especially the Ohio State game. Thank you for sharing your thought. I don't understand what is wrong with him. Is it attitude? Is he not feeling well? Is it his conditioning? Because he grossly underplayed most of the game. Last night, I saw him miss a shot or do something sloppy...his body language was just oozing lazy....and then stand there while an Ohio State player ran the court and dunked in the face of a late-arriving-not-paying-attention Robinson. He looked like a lazy NBA player in the first 3 quarters of an NBA game. He is just not bringing his all...imagine what he could do if he did.

Confusing story Tom. I couldn't tell if it was fact or opinion....

What's confusing about it? It's a column. Keegan turns out several of these columns (i.e., opinion pieces) a week as sports editor. Not too hard to figure out.

I want to see Elijah become a stud.

Totally agree with comments on T-Rob. What's up with that anyway? Did any of you see Calipuki keep Jones out of the Indiana game almost for it's entirity for bad attitude? Might just have cost him the win, but as much as I hate Cal., I thought he got Jones's attention. Might not hurt to do the same with T-Rob. He's just not the same. Acts like the whole show is all about him. Snap out of it T-Rob. It's called TEAM for a reason.

hey, guys aren't we on the one year anniversary of his grandparents passing and his mom in next month or so, lighten up.

doesn't appear to me that's what's on his mind. Like to think so, but doesn't look like that at all to me.

What,s happen to Tharpe. Did not play in the last two games. I thought he was supposed to be a good point guard

A few years back Self did the same thing with EJ. Benching Tharpe early in the season will not help his development. We will need him in March so benching him now is not the right call. (In my opinion)

Even those who might crack that new Kansas football coach Charlie Weis should recruit Tyshawn Taylor to play defensive back because he’s so good at creating turnovers have to respect what Taylor did this week.

Um, I think some punctuation is missing from this really poorly written sentence.