Which Jayhawk was most vital in the overtime period of KU's 81-79 victory over Kansas State? 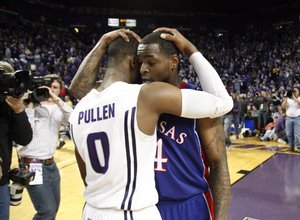 Manhattan — An estimated 8,200 students shook off another Friday night in Aggieville and showed up for the Saturday morning taping of ESPN’s Game Day. All the big names — Dick Vitale, Jay Bilas and Digger Phelps — came to town for it. Televisions across the nation tuned in, making dollars mount. High rollers lined the courtside seats.

Moments after what could stand up as the best game of the 2009-2010 college basketball season, Cole Aldrich stood in the tunnel between the court and the locker room and talked about it. Listening to him, hearing the boyish enthusiasm in his voice, it became clear that on nights like this, college basketball is not at all about money. Instead, it’s about the only people who don’t get paid, the student-athletes who play the games and the students who generate the spirit.

The rest of us amount to fortunate voyeurs.

Aldrich helped Kansas defeat rival Kansas State, 81-79, in overtime Saturday night at Bramlage Coliseum, now known as the Octagon of Doom. He pitched in with 18 points, 11 rebounds and three blocked shots, and he marveled at how his pal Sherron Collins yet again delivered a huge shot in the clutch.

The suspense pretty much ended when Collins, all 5-foot-11 of him, took a daring drive into the land of giants and tossed in a shot high off the glass. As always, when a great closer such as Collins finishes off a hard-to-kill team, plenty of others helped to make it possible, Aldrich among them.

“Coach said walking back to the locker room, ‘The big fella’s back.’ I’m playing my heart out and having a lot of fun,” Aldrich said.

So are Marcus Morris, who continued his productive ways, and Brady Morningstar, who never has played better than he played Saturday. He uses such active hands in such smart ways and shoots so efficiently (five field-goal attempts, 14 points). Though he doesn’t look the part, he’s a big reason Kansas will sit atop college basketball when the Associated Press poll is released Monday afternoon.

“You ask the older guys on this team, and we’ll tell you we really don’t care,” Aldrich said of moving back into the No. 1 spot. “You tell us we’re No. 1 in April, and we’ll get excited. Right now, it’s just a number and we’ve got to prepare for a good Colorado game.”

That attitude shows this team is mature enough not to get too high on itself. The players’ attention is trained on improving. At the same time, they know the significance of what they accomplished Saturday night.

“It’s probably going to be the most hostile crowd we played in all year,” Aldrich said. “I love it. I love it. They were yelling all sorts of things, and they really helped their team out. It was just a big sea of purple. It was fun.”

Beautiful. Isn’t that huge part of what college is supposed to be all about? Let others stress over the outcome. Aldrich is going to enjoy every minute of a journey he’ll remember forever.

Can't help it, makes me feel good to see two rivals like Collins and Pullen embrace after trying to rip each others hearts out on the court. Doesn't matter what color their uniform is, they are true gentlemen.

Some stories are so well crafted, you can't help but feeling glad while reading them. This is one of those stories by an inspired craftsman. Thank you, Mr. Keegan.

Nicely done Mr. Keegan. Can't wait for the Drive now. Plus, you were right on your pick, Jesse wrong on his. One for us old guys huh? Oh wait, that was supposed to be mature.

"The rest of us amount to fortunate voyeurs." Insightful comment Tom - well done!

Playing 10+ minutes with four fouls,now that is priceless. Did anyone else notice who was at the rim when Collins made his winning shot? Cole would have had the stick back had it not gone in. Not bad for a kid from Minnesota.......not known as a "basketball state." Cole playing hockey instead of basketball? I don't think so............

Stop using the wrong name for K-State's gym. It's not the "Octagon of Doom;" it's Allen Field House West.

minnhawk- Cole's stick back would not have counted because Collins got fouled on the play.

Great article that sums up why no other sport can match the wonderous game of college basketball. Dickie V said it best last night-"March Madness captivates the nation baby!"

There's even more fun to be had next year if you come back!

Cole enjoy these moments to the fullest because they are few and far between in the NBA.

Agreed, Wilbur...actually we truly own the town of Manhattan as well but Lawrence West may be a bit presumptuous.

Tom, I have to agree with many other posters thus far. This was a wonderful article. You really highlighted the beautiful essence of amateur athletics and what sets it apart from the professional ranks. It comes down to the pure joy of the game.

Good article, Keegan! Jayhawk Nation---Jesse was right on his prediction, score-wise----it ended up being a two-point win---he just got the purple mixed up with the crimson & blue! I forgive you Jesse, but don't let it happen again.

Love you Cole!!! Keep up the attitude. Rock Chalk!!!

Reading this article made me think of Collins embracing his competitors after the game and how both he and Cole will miss college ball and the University of Kansas next year. I can't imagine being in thier shoes. Cole and Collins are truely blessed and are great representatives of KU.

Have to be careful though. Easy to get up for the most hostile crowd / big rivalry, etc. Wed. night's game is a "trap game". Looks like one of those we've lost in the past. Road game against a not so good team where there might almost be as many KU fans as CU fans and there's sure to be a good number of empty seats as well. KU doesn't always play all that well when the hype isn't there as much.....i.e., look at most of that Nebraska game for what you might expect to see on Wednesday.