Former Kansas guard Kirk Hinrich has his jersey retired during a halftime ceremony against Missouri on Sunday, March 1, 2009 at Allen Fieldhouse.

Less than a month ago, the Kansas men squandered a 14-point lead and fell in Columbia 62-60. 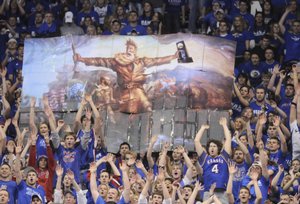 Kirk Hinrich stood in the fabled northwest tunnel of Allen Fieldhouse at halftime of Sunday’s Kansas University-Missouri game. He craned his neck to watch a highlight video of his storied KU basketball career playing on the center scoreboard.

Highlight after highlight on the big screen was enough to bring a 28-year-old man to tears.

“Watching the video brought back so many good memories. It was really emotional,” said the Chicago Bulls point guard/shooting guard, who at the conclusion of the video walked onto the court to a thunderous standing ovation from 16,300 fans who remained in their seats for his jersey-retirement ceremony.

“It was a great day, better than I expected. It was electric. This is the greatest honor I can have,” added Hinrich, who watched in amazement as his jersey No. 10 was unfurled high in the south rafters.

His banner hangs next to those of buddies Nick Collison and Drew Gooden, his teammates at KU.

“I am truly honored to be here. It’s humbling. Thank you all very much,” Hinrich told the fans. He thanked former KU coach Roy Williams as well as family members, friends and the fans.

“When I came here today, I was thinking about what I would say about this place and how special it is for me to be a Jayhawk and still be a Jayhawk. There’s nothing like it. In my mind, this is the greatest basketball venue in the world,” Hinrich said.

“On the court, my best memories are going 16-0 in the league (2001-02) and the Final Four appearances (2002, 2003). The best memories are off the court, the relationship I had with my teammates and coaches. Kansas basketball is like a family. It’s what makes it special,” he said.

Hinrich, who is ninth all-time on the KU scoring charts and fourth in assists, visited the Jayhawk locker room after the game.

“Just casual stuff,” he said of what he discussed with the current team members. “I’ve been following them all year. They’ve been playing great. A few of them I know. A few I don’t know as well. (I said) ‘Just keep it going.’ I just went back there to say hello.”

“That’s a really good team (that sat) behind the bench,” coach Bill Self said. “It was great to have those guys back because they love this place.

“It was a great day for us having a crowd like that, playing well, getting a number of former players back, and Kirk’s jersey in the rafters made it a pretty special day.”

Self on the loud crowd

Self praised the fans packing the fieldhouse.

“The atmosphere was fabulous,” he said. “I felt coming in the game this would be as good as (some big games in past like Georgia Tech in 2005) just because they beat us the first time and stakes were high. More important than anything, it’s Missouri. The crowd didn’t disappoint at all.”

Bradley Beal, a 6-foot-3 sophomore guard from Chaminade High in St. Louis, attended and sat behind the Kansas bench.

It was a GREAT game except around the country CBS pulled a Heidi and switched to the Florida vs Tennessee game with 7 minutes to go. Guess KU shouldn't beat people so bad so we can watch the entire game in southern Arizona.

Yeah, I jonhitch feel your pain. CBS switched the game in San Deigo also. I hate when that happens because you miss the opportunity to see the non-frontline players like Q. Thomas, Appleton, etc. CBS sucks as a College Basketball broadcaster. I really prefer the ESPN/ABC/Fullcourt family to carrier the KU games. But, March Madness is coming and CBS carriers those games so we better get use to it.

CBS is awful. Luckily, my brother has a SlingBox so I could watch the game on my laptop in ATlanta where we had no choice but to watch the entire Florida-Tenn game locally. I cannot recommend a SlingBox high enough. I get Chiefs games, Royals games, and on the few occasions that ESPN or ABC/Fullcourt do not put a game on I still get to watch my Jayhawks. Of course, you still have to have somebody in KC that has host a SlingBox for you.

I live in NJ and the same happened to me. They switched off the KU game and put the Florida vs Tennessee game on. What's annoying about this is, I have DirectTV with the ESPN Full Court Package. I know that CBS has no affiliation with ESPN/ABC/Full Court, but they SHOULD have the same sort of deal where you can choose which game(s) you want to watch.

I agree with Underdog in that I couldn't see the guys that you don't normally see play like Q and Appleton, etc.....Drives you nuts!

Note to CBS.....stop scheduling multiple games at the same time so you don't run into this problem. Believe it or not, Kansas and MIssouri are not the only locations where people follow those teams.

As much as I get annoyed about them switching off the game yesterday, I still think CBS actually does a good job during the tournament in jumping around. It's annoying when you can't watch your team, but when it's not YOUR team, I would rather see the better game.

They switched games in Houston also and Texas is a Big 12 state!!! We're really furious at CBS for switching games even if it was a blowout. Their announcers aren't as good as the ESPN/ABC announcers and I'm glad they got rid of Billy Packer. CBS needs better decisionmaking about when and where to switch a game even if it is a blowout.

CBS is terrible, but you guys all need to get Direc TV. I had channel 728 which was the second regional cbs channel and I got the whole game. I was worried that I wasn't going to get it and then I would have to trek out and miss the first half just to get to a bar that carried the game. Everyone should get Direc TV, pay for the ESPN full court, then pay the very small minimal fee to get the other sports package that carries ESPNU. I haven't missed a game all season.

kushaw, I have directv. They did not show the game on 728 in my area. DOWN WITH CBS!

Where's the video of Hinirch's ceremony??

Great point jayhawkpurist! I would like to see that!

I live in Kansas and I didn't get that to happen at all... I got the very end of the Tennessee Florida game directly after KU dribbled out the clock

Kirk's ceremony taped by a fan at the game:

kushaw ditto to what 63Jayhawk said .. I have Directv and Full Court.. I live in AZ and because our CBS station was showing the KU game they blocked the 728 channel even after CBS switched. Directv says because our local CBS station is showing the KU game they cant unblock 728. Even though our local changed to the other game Directv could not lift the block.. I like carterpatterson was saved by swingbox that my daughter in KC. CBS doesn't care as they have shown over the years.

While I appreciate the posting of the youtube Kirk ceremony video, it is unwatchable . It looks as if the person running the cam was drunk.

TV scheduling and getting cut away from your game is a B*TCH. However, I live outside Columbia, where CBS had to show the complete game, but I think I may have been the only one watching those last 7 minutes on the columbia affiliate. At least CBS announced you can watch alll Tourny games in their entirety at cbssports.com

I was equally flustered here in Los Angeles. The crazy thing is that CBS switched to the Tenn/Florida feed when it was an eight-point game (not exactly a nail-biter at that point). Granted, the score for that game got closer in the later minutes, but for those who might have wanted to switch to the Florida/Tenn game -- IT WAS ALREADY AVAILABLE FOR ONLINE VIEWING AT CBS.COM. Of course, the KU/MU game was not available for online viewing. Frustrating to say the least. At least KU did its job and kept up the big lead over Mizzou, so the outcome was never in doubt!

I tried to watch the game on CBSsports.com. The only game they were streaming live was TN-FL.

"Bradley Beal, a 6-foot-3 sophomore guard from Chaminade High in St. Louis", class of 2011 who sat behind the bench must be a KU fan after a game like that. Great game hawks.