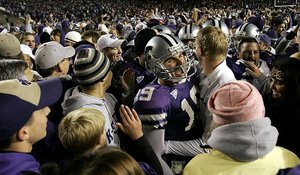 Rarely does a first-year coach arrive on campus and immediately boost the team's win total from the previous season.

But with two games left, Kansas State football coach Ron Prince already has shot past what KSU did last season. Bill Snyder retired a year ago and finished his decorated 17-year coaching tenure at K-State with a 5-6 season.

At 7-4 overall and 4-3 in Big 12 Conference play, Kansas State has exceeded expectations this year. It was favored to finish last in the Big 12 North in a media vote in the preseason, yet still has a shot to tie for first. Tiebreakers dictate that Nebraska will play in the Big 12 championship game regardless, but there's no hiding the fact that Prince will be a strong candidate for conference coach-of-the-year honors - something few expected just two months ago.

The signature victory, perhaps in the entire Big 12 this year, was the Wildcats' 45-42 triumph over No. 4 Texas last week, a game KU coach Mark Mangino watched at home with family.

"The thing that stood out to me is that K-State took some chances, which I thought was good," Mangino said. "K-State played with a lot of emotion. They always do at home, but they were really pumped up."

Prince has gambled with talented youth on offense, including freshman quarterback Josh Freeman (1,407 passing yards, six touchdowns) and freshman running back Leon Patton (493 yards, five touchdowns). The personnel changes earlier this season have helped a staggering turnaround - the Wildcats had three games without an offensive touchdown earlier this season, but now have scored 30-plus points in each of the last three games, all conference victories.

"Those guys have a lot of confidence going right now," KSU defensive lineman Quintin Echols said. "They are the same guys with the same speed and same technique as before. They've just got the confidence now, and when you have confidence, it's hard to break your team down."

With an adequate offensive line labeled a liability just eight weeks ago, and Kansas State's offense is a success story not many saw coming. Its execution could be the difference between win or loss today, when K-State plays Kansas at 2:30 p.m. at Memorial Stadium.

"Their offensive line is starting to jell a little bit and come together. It was not a strong suit at the beginning of the year, but it has improved immensely," Mangino said. "Then I think when you add Freeman and some of the catches his receivers are making, Leon Patton the young running back : they are kids that are coming along and developing and starting to hit stride."