As KU and K-State play football today, more is at stake than mere athletics 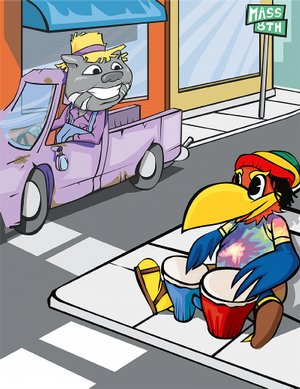 Today's football game between Kansas and Kansas State is more than a contest between the red and blue and the purple.

It is the clash of two rival universities: the farm kids versus the preps, the country versus the city, the friendly versus the not-so-friendly.

At least, that's the word on the street.

It's "the battle of the state," Manhattan resident Ritchey Farrell said of the age-old rivalry.

And though the Jayhawks and the Wildcats dwell only 85 miles apart, those in both towns often see a world of difference.

When folks in the Little Apple think of Lawrence, words like "preppy" or "prestigious" often arise. KU is not the red and blue, but the crimson and the royal blue to be precise.

"In Lawrence, they have a give-in prestigious attitude for some reason," said K-State senior Khad Crabbe of Bronx, N.Y. "I would say the people here at K-State are more approachable."

Ditto according to K-State senior Nick Enlow of Overland Park. To Enlow, KU folks loathe Wildcats more than the other way around.

"KU people have more of a sense of dominance over us," he said. "They want to pick on us."

In size, the schools aren't dramatically different. K-State's fall enrollment this year is 23,100, while KU's is 26,800, not including KU Medical Center.

Wildcats in Manhattan look east and see a more urban community in Lawrence, one often associated with Johnson County.

And many pick up on Lawrence's political reputation of being an island of blue in a sea of red.

"I think the student body influences both towns, but I think Lawrence is more influenced by students from a liberal background because I believe they draw their student body from both coasts where people tend to be a bit more liberal than they are in the Midwest," said Norman Warders, a retiree living in Manhattan.

"It seems like there's a lot of hippies there," she said.

When Jayhawks consider Wildcats, they see, well, the opposite of urban.

"It's sort of like a country, backward type of town with not a whole lot to offer and kind of a lame college town compared to Lawrence," said Adam Clark, a KU junior from Overland Park.

KU senior Becky Strathman of Seneca said going to the K-State campus reminds her of going back to high school.

"I feel like (K-State students) don't experience anything new outside of what they have experienced the rest of their life and in high school and stuff," Strathman said. "I think we're more open to things than K-State students are."

Who's the more loyal fan? Well, that's an issue both sides are willing to arm wrestle over.

"The K-State fans are some of the most loyal fans anywhere," said K-State senior Jordan Essenburg of Dodge City. "They'll go anywhere to watch our guys play - anywhere in the United States. Whether it's raining out, snowing out, they're there with purple on, ready to back us no matter what happens."

Oh, but so are the Jayhawks, they say.

"The KU fans are supportive no matter how the season is going," KU junior Jamie Shaw, a Lawrence native, said. "It probably helps that we win a lot."

Some differences between the cities:

Percentage of K-State students from Kansas: 80.8 percent in 2005

Percentage of KU students from Kansas: 69.6

Why ain't the PowerCat chewin' tobacco?

Terrific illustration! I graduate from KU and now work at KSU. There are all types...both places. It's silly how we tend to dwell on the imagined differences.

ronwell, I'm with you. Karl, try to make your artwork a little less creepy next time. I mean, what is that? Cheshire Hickcat and anime-eyed Rastahawk?

I did three years of my undergraduate degree at KU. I completed my degree in Topeka at Washburn University. Now I'm working on my Masters degree at KU. If I could turn back time, I would go to KSU for my undergraduate degree. Their tradition of academic excellence is unparalleled with their reputation at the public university level. Kansas State University is the only public university since 1986 to rank among the top 10 of all U.S. schools for all five of these major scholarship programs: Rhodes, Marshall, Truman, Goldwater and Udall. Throughout it all, I've been a Kansas State Wildcat fan!!! I've never lived in Manhattan, but I love the town, love the campus, love Ahearn Fieldhouse, and Bill Synder Family stadium. I've been to many basketball games in Allen Fieldhouse in Lawrence and it just can't touch the atomosphere that KSU basketball had when it was in Ahearn. I saw K-State (under the leadership of Lon Kruger and Steve Henson) beat number one ranked Oklahoma in Ahearn in late winter of 1988. Truly the most incredible college basketball game I've ever seen. I was hooked and have been a KSU Wildcat fan ever since. Someday soon, that glory will return to Bramlage coliseum. I've followed KSU football to all the Big XII venues and several bowl games. The KSU fans are down to earth, pleasant, fun to be around, and love to demonstrate purple power. KU fans tend to be surly, rude, arrogant, fair-weather fans who berate their coaches (Glen Mason) and don't fully appreciate the joy of competition and supporting their team. I'll be watching this afternoon's game and will be eager to see another Wildcat victory over the lowly Jayhawks!!!

Looks like someone works for the KSU public relations office. Way to spout all the talking points from their commercial.

Manhattan is a godforsaken cowtown in the middle of nowhere. As I've explained to all my friends from back home in Illinois, Lawrence is like a small Madison and Manhattan is every stereotype you think of when you think "college town in BFE Kansas". When your city's finest dining experience is the Carlos O'Kelly's at the mall....well, let's just say you aren't going to win any quality-of-life awards away from Lawrence anytime soon.

Thank you PeteJayhawk! Exactly! Lawrence defines itself by its "fine dining". Manhattan is defined by its great people! And your rationale for comparing Lawrence to Madison, WI is laughable! Is that because your friends from "back home" won't come to Kansas to visit you? Fess up, are you ashamed to be a Kansan?

I love both cities and while a loyal Wildcat, I inadvertantly attended KU for some grad classes. I agree that every stereotype exists on both campuses. Lets agree on this: Those who live and breathe and create their persona based on their Alma Mater's sports teams success or failures are losers.

I have to say this. I FREAKING HATE THE POWERCAT. I still wear my washed out willie the wildcat hat and my own alumni base mock me. Oh well...EVERYMAN A WILD CAT GO JIM BEAM!!!! KSU 45 KU 17

Re: topekan7's comment about K-State basketball glory of yester-year returning soon to Bramledge...I call bullsh*t. That place will never, ever, ever come remotely close to rekindling the magic of a place like Ahearn. To do that, you need both good basketball AND a good atmosphere. Ahearn delivered the atmosphere in spades. Ahearn and Allen were the great venues in the conference. Bramledge is just another lame arena in the conference now. The basketball rivalry has not been the same since K-State built Bramledge. And I don't think it ever will be the same. How awesome if K-State would play ONE home game each season at the old gym...make KU beat them in Ahearn. Would bring back some of the magic, I'd suspect. It sure would make it more interesting for me as a fan, that's for sure.

jhyphene, I agree with you completely! 'Nuff said bro!

BABBOY, why are you being "that guy"? If you were confident and proud to be a wildcat, you would feel good about your school, not bad about KU...

Also the whole "which I could buy seven times over" comment? Who do you think you are? You sound like some Jack@#$ braggart.

Congrats to the writer of this article!!! I've really enjoyed reading these posts tonight. It was fun seeing an article like this get KSU fans arguing back and forth between themselves. HAHAHA It was awesome. After the first time topekan7 posted, their were only two posts by a jayhawk fan, the rest were KSU fans trying to argue about the "glory days" of Ahearn and the football program under Snyder (who by the way took the powercat logo idea straight from Iowa, and dispite his tremendous success and honors actually ended up hurting the program several years because of weak scheduling when they had a very strong team). I love it. Go Jayhawks!!! Way to whip those cats!!!

you lost... get out of our city, and get off of our websites.