Spot-on for over 5 decades

Leon Patton will slash off tackle this afternoon for a few yards before he's brought to the ground. Hank Booth will inform the 50,071 at Memorial Stadium that it was Patton who carried the ball and Mike Rivera who made the tackle.

And no one in the stands will ever know that Martin Jones had anything to do with disseminating that information. Who is Martin Jones? Precisely. He's behind the scenes, which is fine with him. Jones, 83, a World War II veteran and prisoner of war, has been serving as volunteer spotter at Kansas University football games for the public address announcer for 56 years.

Before Ed Elbel, Jim Gillispie, Howard Hill and now Hank Booth called out the tackler or ball-carrier for KU, Jones let him know who made the play. Pat Rapp, a fellow spotter, concentrates on the opponent.

"This may be my last year," said Jones, who will be in the booth, peering through his binoculars for the 104th Kansas State-Kansas showdown today.

Jones has been helping out the KU athletic department for so long his service predates Allen Fieldhouse.

"At Hoch Auditorium, we were seated at the back of the grill where the sound for the organ comes out," he remembered. "We couldn't even see the whole court." 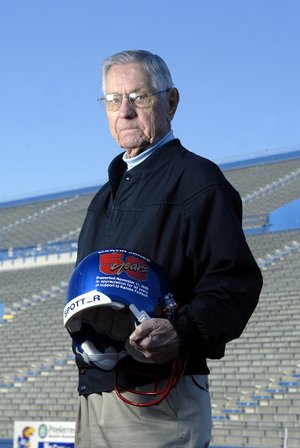 Martin Jones has been a spotter for the Kansas University football team for 56 years.

"I had to telephone to the press section because they could not see the table," Jones said.

The great games, the tough losses, the rugged tacklers, the clutch shots. Jones remembers them all. He listed one-point, January basketball losses to Missouri on consecutive years (1968-69) as the toughest losses and ranked the three-pointer Ryan Robertson hit to give the Jayhawks a one-point victory against Oklahoma State on Feb. 22, 1999 and Bud Stallworth's 50-point game against Missouri in 1972 as a couple of the better memories.

A graduate of KU and a faculty member and administrator for 40 years, Jones retired in 1986 as director of business and fiscal affairs for the Lawrence campus.

Jones didn't have Wilt Chamberlain in class, but did give him some private lessons when one of the basketball coaches sought help for the center.

"Wilt was taking accounting and having some difficulty," Jones said. "I would quiz him and ask him for explanations. He caught on very quickly," Jones said.

"He was a hustler beyond anything," Jones said. "He gave it 200 percent every play. One time, the ball was about to come out of bounds where I was sitting. He came charging down there and tapped the ball back toward the KU basket and jumped over all of us at the scorer's table, landed in about the second or third row, and a KU player ran down and got that ball and scored."

Asked to list tacklers whose name he remembers feeding to the p.a. voice, the first one he mentioned came as no surprise.

"Tackle by Willie Pless," he said, mimicking the call he heard so many times.

Jones occasionally filled in for the public address announcer, and on one of those occasions, the outside world crept into the Fieldhouse in 1973.

"There was a minute left in the game and I was handed a scrap-paper note from someplace," said Jones, married to wife Phyllis for 60 years. "I looked around and couldn't tell where it was from. It said: 'Viet Nam War is over.' At that time students used to bet whether they could get their name announced over the public address, so I wasn't about to announce it based on that little scrap of paper.

Jones knew what that meant to the men overseas.

He said he was captured late on the fourth day of the Battle of the Bulge.

How did he get through the experience?

"One another," he said. "A buddy, mainly one buddy. We were captured near the end of the war, earlier in the war the prisoners of war were treated a little better. At the end, Germany had nothing for themselves, so the prisoners of war got almost nothing. I lost 35 pounds in the first three months, and most men lost more than that. I weighed about 120 pounds. Many weighed 110, 105. We relied on one another and discipline. We had a Colonel captured and in the camp, and he insisted we shave and fall out every day."

Jones will wake up this morning, shave, and before long head to Memorial Stadium to lend a hand, same as he's been doing for the past 56 years.

Ryan Robertson hit 3 free throws in 1999, not a 3-pointer. He was fouled on an attempt with no time left on the clock.

Despite that error, it's a great article. I love to hear about that kind of behind-the-scenes stuff.