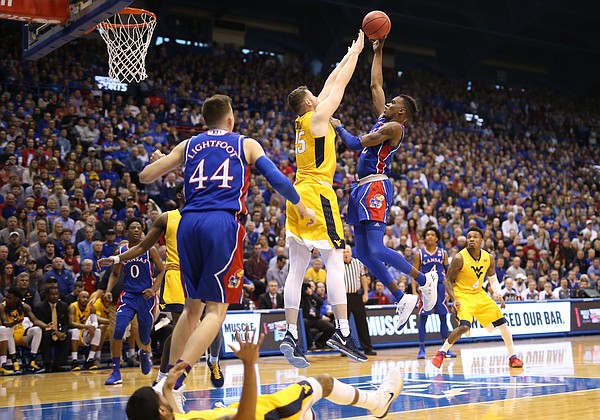 Kansas guard Lagerald Vick (2) hangs for a shot over West Virginia forward Maciej Bender (25) during the first half, Saturday, Feb. 17, 2018 at Allen Fieldhouse. by Nick Krug

By the end of Saturday night, Kansas found itself once again tied with Texas Tech atop the Big 12 standings, thanks in part to a huge performance from its massive center, Udoka Azubuike.

The Jayhawks recovered from a 12-point, second-half deficit against West Virginia at Allen Fieldhouse for a 77-69 victory, while Texas Tech lost at Baylor, making the two league title contenders both 10-4 in Big 12 games.

Here are five statistics that proved to be critical components of KU’s wild home win.

Points in the paint

By taking on the role of the aggressors, the Jayhawks were able to survive the Mountaineers’ torrent of 3-point shooting (14 of 26).

Kansas outscored WVU 30-16 in the paint. While Azubuike gets most of the credit, what with his four dunks and three layups, his teammates supplemented the center’s ultra-high-percentage shots.

Both Marcus Garrett and Lagerald Vick contributed 4 paint-points apiece in the first half. Svi Mykahiliuk made a layup in the first and took a steal for a slam in the second. Both Vick and Malik Newman came through with much-needed lay-ins during KU’s second-half revival.

The Jayhawks’ 14-point advantage inside marked the first time in Big 12 play they enjoyed a double-digit margin in the category.

Bob Huggins-coached teams are known for their pesky defenders. And West Virginia might have the best on-ball stopper in the Big 12 in Jevon Carter.

But the Jayhawks didn’t let the Mountaineers’ style speed them up into a lesser, turnover-prone version of themselves. Kansas finished with just 8 turnovers, its second-lowest total of the season, against WVU.

The Mountaineers only came away with 4 steals over the course of 40 minutes.

Few sloppy offensive trips meant only 8 points off turnovers for West Virginia. In the meantime, the Jayhawks cashed in on 13 WVU giveaways to score 15 points. 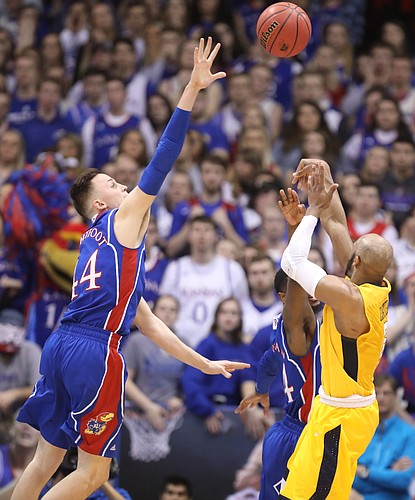 Kansas forward Mitch Lightfoot (44) defends against a shot from West Virginia guard Jevon Carter (2) during the first half, Saturday, Feb. 17, 2018 at Allen Fieldhouse. by Nick Krug

KU deserves some credit for properly defending Carter down the stretch, but the WVU senior point guard shoulders some blame, too, for how the final minutes of the second half played out.

Carter only connected on 3 of 10 shots in the final half, and he often forced the issue or settled down the stretch.

In the final 10 minutes, after WVU took its largest lead of the game, Carter missed six of his eight attempts, including two errant layups. One of his makes, a 3-pointer, didn’t come until KU had all but sealed the win, with six seconds remaining. 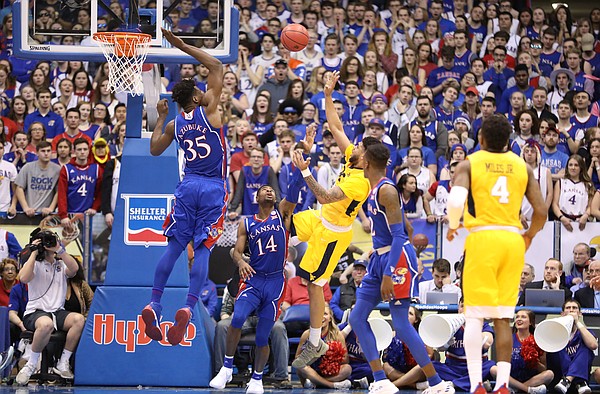 Kansas center Udoka Azubuike (35) gets up to block a shot from West Virginia forward Esa Ahmad (23) during the second half, Saturday, Feb. 17, 2018 at Allen Fieldhouse. by Nick Krug

Azubuike didn’t just make his presence felt on offense, he tormented WVU playing defense, as well, particularly in crunch time. Even better for the Jayhawks, two of the center’s late-game swats led directly to scores.

Carter had a layup smacked away by Azubuike with 2:19 left and within seconds Mykhailiuk secured the ball and found Devonte’ Graham, who pitched it ahead to Newman for a game-tying 3-pointer.

With West Virginia down four and less than 20 seconds left on the clock, Azubuike was at it again, blocking a Daxter Miles Jr. attempt. Graham came away with the basketball and heaved a pass ahead for a Newman layup that pushed KU’s lead to 72-66 before Huggins got T’d up twice and ejected.

Hit ’em when they count

Even before the Jayhawks got to pad their free-throw numbers in the final seconds thanks to Huggins’ technicals, they made their trips to the foul line count late in the game.

The free throws in the final minutes were challenging because Kansas had to have them. The home team got to celebrate Saturday night because its players made 12 of 14 free throws in the last 5:00 — including 7-of-8 shooting while either trailing or ahead by 2 when stepping to the line.

Azubuike made a pair with 4:58 left to cut WVU’s lead to four.

Mykhailiuk nailed a pair with 1:40 remaining to put Kansas up for the first time since the opening minute of the second half.

Graham knocked in two more with 0:24 to go, extending the lead to four. 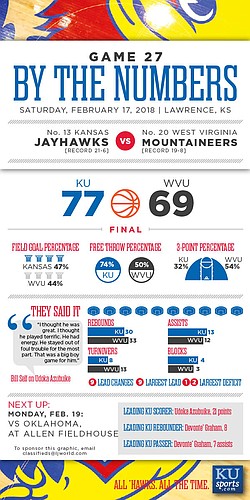