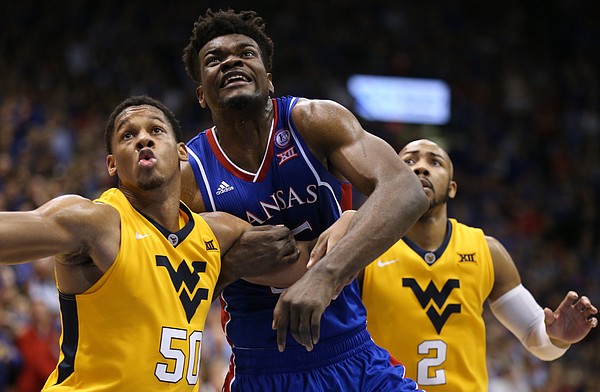 There was really nothing to not like about KU's offensive effort. Maybe Svi didn't take enough shots (3-of-6). Maybe Devonte' Graham didn't make enough (2-of-6). But overall, Ku shot 47 perent from the floor, 32 percent from 3-point range, turned it over just eight times and, oh yeah, won the game. Doing all of that against a tough, defensive minded team like West Virginia brings this into the A range on the curve.

I thought KU's effort was there all game on the defensive end. At times, the Mountaineers just made a bunch of tough shots. Particularly senior guard Daxter Miles Jr. The Jayhawks' defense was at its best when the game was on the line and that's good enough to make this a solid B for me. Give them the plus for again coming within three rebounds of playing even with WVU in that area, as well.

Udoka Azubuike was a beast and played with great effort and energy for most of the night. He even hit his free throws and avoided the bad fouls that have plagued him at times this season. Azubuike also gets credit for playing 31 minutes on a night when KU needed him out there for every one of them. Mitch Lightfoot played just nine minutes and had very little to show for it on an off night for the KU back-up.

Graham may not have shot as much as some would have liked or expected, but he still finished with 15 points, eight rebounds and seven assists. Sheesh. Lagerald Vick had a great first half from an effort and intangible standpoint. Malik Newman had a good finish and a couple of important minutes in the middle. And Marcus Garrett played a terrific first half. Only Svi Mykhailiuk failed to stand out, and even at that the senior hit half of his shots and added four rebounds, four assists and three steals in 37 minutes. If you had a problem with the KU backcourt in this one, I'm not sure what to tell you.

As mentioned above, Garrett's first half was terrific. He played tough, scored points inside and out and even handled the role of being the point man in bringing the ball up the floor on a handful of occasions. He played sparingly in the second half, though, and Lightfoot had an off night. So this one's a low B, mostly due to lack of material to grade.

I didn't think Mitch had as much of an "off" night, as it was an unusually quiet night. Any stat except a turnover is a positive, and as long as players aren't scoring over him or pushing him around with regularity, then it's not a negative (=off) in my opinion.

I'd also agree that the shot distribution had a nice distribution. Unless one of the guards is just ridiculously hot, or a mismatch (Newman, Vick against Baylor) then none of them should be taking double digit shots. We're best when balanced.

Loved Dok's 2 steals. Essentially playing 2 men in the lane, stealing the pass to the guy he supposedly wasn't defending. Really wise, basketball knowledge play - as he moves up the draft boards.