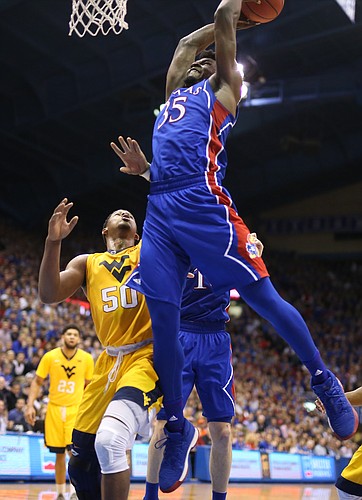 Kansas center Udoka Azubuike (35) reaches for a ball above West Virginia forward Sagaba Konate (50) during the second half, Saturday, Feb. 17, 2018 at Allen Fieldhouse. by Nick Krug

2 - Devonte’ Graham: Took just six shots from the field and scored 15 points to go with seven assists and just two turnovers in, you guessed it, 40 minutes. Made 2 of 5 3-pointers and 9 of 10 free throws.

3 - Svi Mykhailiuk: Steal that he took in for a dunk was huge, cutting a lead that had been 10 points to six, 50-44. It was one of his three steals and he also had four assists and just one turnover.

5 - Lagerald Vick: Strong first half, when he scored 10 of his 13 points to go with five rebounds. Didn’t have an assist, steal or blocked shot, but also didn’t turn it over.

6 - Marcus Garrett: Gave team huge boost first half, when he scored seven of his eight points in 15 minutes. Drove aggressively to the hoop and made a 3-point shot. Played just four second-half minutes because coach Bill Self wanted his best scorers on the floor to come back from a double-digit deficit.

7 - Mitch Lightfoot: Didn’t score a point or get a rebound or blocked shot in nine minutes. it was a good day for Azubuike to log 31 minutes.

8 - The Crowd: Started off loud and raucous, and never let up. Even when KU trailed by double digits late in the second half, the crowd was energized and played a huge part in keeping the Jayhawks motivated. Was especially loud during the crucial last three minutes. By far the best crowd this season.

My ears were ringing for quite a while after the game, crazy loud!

I think it was after Dok's big block near the end of the game, ESPN showed a close up of Dok, he had his fingers in his ears. I haven't been in Allen in a few years, but wouldn't go without hearing protection, it can be deafening, as it appeared last evening.