Jayhawks’ mindset heading into Monday night: ‘Might as well give it all we’ve got’ 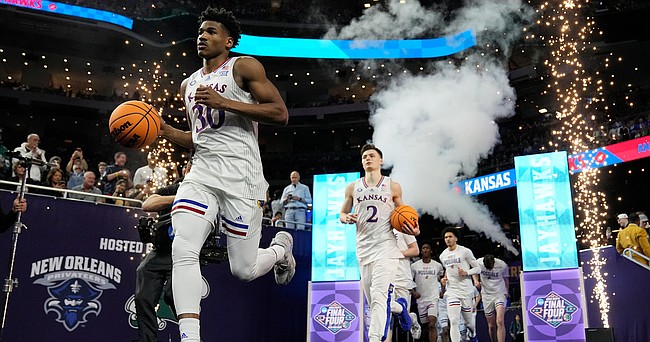 New Orleans — Riding a streak of eight consecutive postseason victories — and 10 wins in a row overall — the top-seeded Kansas Jayhawks are now just one win away from being crowned national champions.

At this point, nothing beyond that matters.

“Might as well give it all we’ve got,” KU senior Remy Martin said during Sunday’s breakout sessions a little more than 24 hours before tipoff in the biggest game of his life. “It’s the last game. Everybody’s going to be watching. This is the moment we’ve all prepared for, and I think that we’ll all be ready to play.”

For a team, and a group of players, used to managing their schedules for the long haul and the grind that is any college basketball season, the idea of letting it all go one more time is both new and intoxicating.

No more pain management. No more saving legs. No more looking ahead to this stretch or that stretch, upcoming road trips or whatever might be next.

“Knowing this is the national championship, it wouldn’t matter what’s going on with me, I would be 100% tomorrow,” KU sophomore Jalen Wilson said on Sunday. “I just think that everyone’s so dialed in and locked in on what we need to do, there’s just no excuses.”

That’s exactly the way sixth-year senior Mitch Lightfoot sees it, too. And after a career that was twice extended longer than most — first by a late redshirt and then by an extra year of eligibility because of the pandemic — Lightfoot said knowing that the end is actually here, win or lose, has put things into a whole new perspective.

“No what-ifs, no could’ve beens, none of that,” he said Sunday. “For a bunch of these guys, this is going to be our last time on a college basketball court, so there’s just no what-ifs. It’s something we’ve been preaching the whole tournament. We want to make sure we go out there and play and put our heart down.”

Eighth-seeded North Carolina (29-9) figures to have a very similar approach, of course. And never will be that more crucial than with UNC big man Armando Bacot, who injured his right ankle during Saturday’s win over Duke and is expected to be at less than 100% for the title game.

Carolina coach Hubert Davis said Sunday that Bacot will play Monday night (8:20 p.m. tipoff on TBS) and that he planned to practice on Sunday.

Bacot, during North Carolina’s breakout sessions said that you’d have to cut his right leg off to keep him from playing.

So the mindset will be similar for both of these teams in the final college basketball game of the 2021-22 season. Nothing gets saved in the tank. Both teams plan to let it fly. And two teams that are already used to finding an edge by diving on the floor and outworking their opponents figure to put on a heck of a show, even by their standards, in that department on Monday night.

“There are two teams left, and only one can come out on top,” Braun said Sunday.

Kansas coach Bill Self said Sunday that his team was thrilled to be playing for a national championship. But he also liked the way KU celebrated its Final Four win over Villanova.

“We were obviously happy,” he said. “I don’t think we spent a lot of energy in the locker room after the win, though. I think we were thinking, at least the best you can, ‘Next play.’ Last night was great for us, as it was for Carolina also. But it’s time to forget about that and get focused on what’s next.”

I remember playing in the Air Force a team that was average. The coach at the request of the other players put me in as the starting point guard. Back in those days there was no 3 point line and we played 4 quarters and the scores were often in the 40's. However, the starting team with me as the point would play 4 hours on Saturday and we would run all 4 hours on offense, and press the whole time on defense and spank the other team (whoever we could get to play). So the first game with me at point, I told the team, "Leave it on the floor, we will run the other team into the ground." We were playing the first place team, undefeated and we were about 8-8. The tactic worked, we won 140-92 and it was not even that close. They were stunned by our play, gassed by the 4th quarter and by then it was a layup drill. I remember we out scored them 25-2 the final stanza. We defeated one team 132-28. We finished second but were by far the best team by the end of the season. I hope KU runs the Tar Heels into the ground. RCJH!