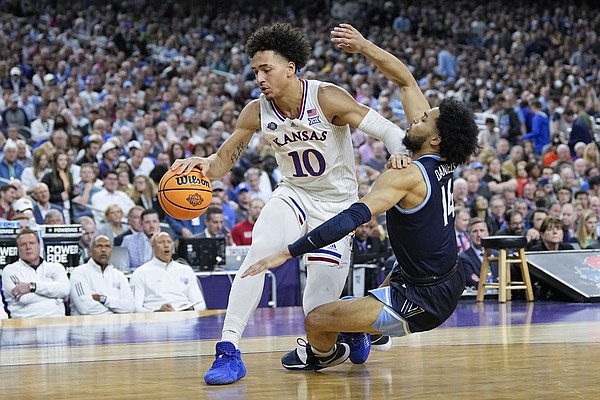 Kansas forward Jalen Wilson drives to the basket past Villanova guard Caleb Daniels during the second half of a Men's Final Four game on April 2, 2022, in New Orleans. by David J. Phillip/Associated Press

New Orleans — Kansas redshirt sophomore Jalen Wilson said he is embracing playing North Carolina in the championship game of the NCAA Tournament on Monday because he chose to play for the Jayhawks over the Tar Heels when he was being recruited out of high school.

Wilson, from Denton, Texas, committed to Michigan in May 2018 and signed a letter of intent that November but was released from that commitment in May 2019 once coach John Beilein left to become the coach of the Cleveland Cavaliers.

He went on recruiting visits to Kansas and North Carolina, then accepted a scholarship offer from Kansas in June 2019.

"It's been a crazy journey," Wilson said Sunday. "I just had texts last night talking about this was my top two coming out of high school and stuff like that. It's just how God works. He puts you in weird positions like this — and fun positions.

"Who would have ever thought we'd be playing UNC in the championship? I just really embrace everything that's come my way through this journey and I'm so excited to play tomorrow."

Wilson, who was recruited to North Carolina by former coach Roy Williams, said Kansas was always his first choice.

This kid is such a hard worker, and just has a great attitude about everything.

I really like Wilson, he is our blue collar worker man. Packs his lunch puts on a hard hat and goes to work. Gets his rebounds, plays his D, scores and does the little things, assists, steals. He is the glue.