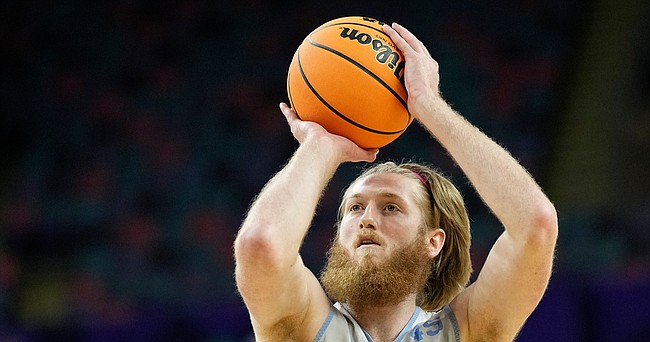 New Orleans — Growing up, Brady Manek spent significant time working on his shot with his father, Cary, even as he continued to grow far beyond the typical size of a shooter.

Yet at no point did anyone — his father, his brother, Kellen, nor any of his coaches — dissuade Manek from developing that skill.

"Never," Manek said. "No one's ever told me to stop shooting, and if they did, I probably wouldn't listen to them."

That stubbornness has helped Manek, a 6-foot-10, 230-pound forward, reach success throughout his years playing basketball. It has also helped North Carolina, which has benefited from Manek's unique skills, make an unexpected run to the NCAA's national championship game.

On Monday night at the Superdome, the Tar Heels will face Kansas — an opponent Manek knows well from his four years playing at Oklahoma.

Manek enters that game averaging 15.2 points a game and is making 40.1% of his 6.2 attempts per game from 3-point range. He's also grabbing 5.9 rebounds per game on one of the best rebounding teams in Division I.

As a stretch four — a forward who plays more away from the basket than he does near it — Manek provides a wrinkle to North Carolina's offense that first-year coach Hubert Davis knew he wanted to incorporate upon taking over for Roy Williams this season.

"For me, from an offensive standpoint, it's fun when you have spacing and balance and a combination of ball and player movement," Davis said. "The only way you have spacing is you have to have shooters. You can have five non-shooters in the stands, and if they're non-shooters, the defenders are still going to be in the lane.

"I just felt like having that four that has the ability to play on the outside opens up our offense, makes us more versatile, and I don't think there's anybody better in the country at being able to do that than Brady."

Manek transferred to North Carolina nearly a year ago after Oklahoma coach Lon Kruger retired, and he played a very similar role for the Sooners. He had success against the Jayhawks while playing with them; in eight games, he averaged 12 points and six rebounds while shooting 44.4%, including 36.6% from 3-point range.

His familiarity with Big 12 opponents manifested itself in the second round, when he had 26 points in a 93-86 overtime win against Baylor, the No. 1 seed in the East Region.

Manek downplayed the idea Sunday that he's on a Big 12 revenge tour but acknowledged "it is really cool to get to play some of these teams again."

And Kansas is banking on that familiarity to guide it against Manek again on Monday.

"We've played him a lot," said redshirt sophomore Jalen Wilson, who is likely to draw the assignment of defending Manek. "We've got a lot of stuff on film just from playing him at Oklahoma. It's not the same team, but he's kind of like a similar player, as far as wanting to stretch out and shoot the ball and stuff like that. We're just going to have to continue to have somebody on him and get in get our hands in his face and not let him shoot."

Kansas coach Bill Self underscored Manek's lethality Sunday when grouping him with teammate Caleb Love, another strong 3-point shooter. The two have combined to shoot 90 3-points during the NCAA Tournament — and Kansas, as a team, has attempted 91, including 24 in the Final Four victory over Villanova.

"He was always a threat at OU, but Hubert's given him a mind, a free mind, that he feels like anytime he's got any separation at all, he needs to let it fly," Self said. "That's a compliment to his coach and their staff, but also, he's such a good player. He's got such a quick release. It's a high release.

"Playing him at OU, you had to defend him probably a little more at the post. And now, obviously, with (center Armando Bacot) in the game, he's playing primarily on the perimeter."

Manek's parents played basketball at Oklahoma Christian, now a Division II school, and Manek and his brother learned how to shoot when Cary Manek worked camps.

"In high school, everybody knew I was going to shoot the ball," Manek said. "Everyone knew when I touched it, it was probably going up. When I got to college, they knew what they were getting. They knew they weren't getting a bruiser down low and I've just been able to grow that at Oklahoma and for this year, it's grown even more."

Stay in his shorts tonight!!