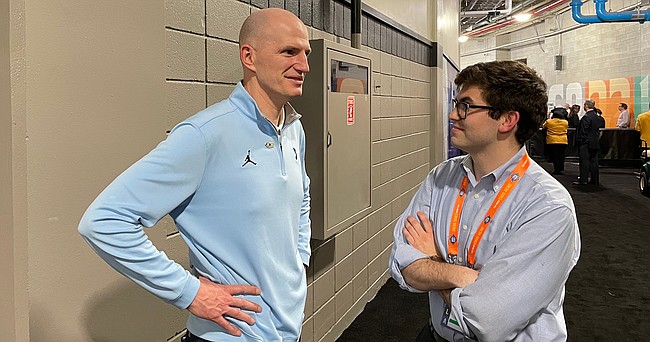 North Carolina assistant coach Brad Frederick, left, talks with a reporter outside of the UNC locker room after the Tar Heels' 81-77 win over Duke in the national semifinals on Saturday, April 2, 2022 in New Orleans. The win pits Frederick, a 1995 Lawrence High graduate, against the team he grew up loving, in Kansas, on Monday night for the national title.

New Orleans — The first text North Carolina assistant coach Brad Frederick got from the crew he went to Lawrence High with in the 1990s after advancing to Monday’s title game with a Saturday win over Duke posed a simple question.

“Congrats,” it began. “But are you going to root for KU on Monday?”

That most certainly will not be the case for Frederick, a full-time assistant coach on Hubert Davis’ staff at his alma mater. But the fact that the only thing standing between him and another national championship ring is the program he grew up rooting for qualifies as at least a little bit of a wrinkle in this entire postseason experience.

As if reaching the title game as an 8 seed that, not long ago, was fighting just to make the NCAA Tournament field is not wild enough, Frederick has experienced all kinds of craziness in the past month. From beating top-seeded Baylor in the second round to ending Duke coach Mike Krzyzewski’s career on Saturday night, this ride for the 29-9 Tar Heels has been unlike anything Frederick has experienced.

And this is a man who has been to five Final Fours with UNC, two as a player and three as a coach.

“From our perspective, there was so much build-up to Duke coming into this,” Frederick told the Journal-World outside of the UNC locker room after Saturday’s victory. “I was just texting my mom and my brothers after this and I said, ‘Man, we beat Duke and slayed the dragon and now we’ve got to play KU in the national championship game.’ Unbelievable.”

As the son of late KU Athletic Director Bob Frederick, Frederick’s experiences at KU were both big and memorable. And they started with the Jayhawks’ run to the 1988 national title under Larry Brown, when Frederick was in fifth grade.

“I’ve been blessed to be around it,” he said of the KU program. “In my dad’s first year as athletic director at Kansas, Larry Brown allowed me to travel with the team for the NCAA Tournament. And he’s superstitious, so that meant I had to be at every practice and every function and they win the national championship in ’88.”

Fast-forward a few years later, when Roy Williams led the Jayhawks to the 1991 and 1993 Final Fours, and a still-young Frederick had a front-row seat for those runs, as well.

One of them was a little closer to the front of his mind after the KU-UNC matchup was set on Saturday night.

“1993 was here in the Superdome,” he said. “And, of course, I was crushed that Kansas got beat by North Carolina.”

What a wild coincidence.

All these years later, with Frederick now donning the Carolina shade of blue, it will be his Tar Heels looking to knock off top-seeded Kansas (33-6) at 8:20 p.m. Monday night on TBS in the same building.

There are, of course, several other Carolina-Kansas connections that make this matchup interesting anytime it happens.

From Dean Smith’s time at both schools to Roy Williams leaving KU for his alma mater and that paving the way for Bill Self to come to Kansas to the past head-to-head meetings that include everything from three wins by Self over Williams in the NCAA Tournament and the epic 1957 national title game which featured the Tar Heels’ outlasting Wilt Chamberlain’s Jayhawks in triple-overtime.

And now Frederick's name will be added to a pretty big part of the series between college basketball blue bloods.

After graduating from Lawrence High in 1995, Frederick joined the UNC program as a walk-on and played with the junior varsity program, under Phil Ford, as a freshman. He was promoted to the varsity roster for his sophomore season, which was also Smith’s final year as UNC’s head coach. He then played his final two seasons under Bill Guthridge.

After graduating, he joined Kevin Stallings’ coaching staff at Vanderbilt, where he worked until 2013, when he returned to UNC. With the Tar Heels, he first served as Williams’ director of operations for four seasons before being promoted to a full-time assistant role.

“Carolina proved to be an unbelievable choice for me,” said Frederick, who noted that he chose not to attend KU because he did not want to put any pressure on Williams to add him to the team. “All of those NCAA Tournament runs, it’s just unbelievable when you think about the all-time success at both programs. It’s amazing. I mean, two awesome schools.”

Frederick was in charge of the scouting report for Saturday’s game against Duke, so he had not spent a ton of time on Kansas as of Saturday night. Because his family is all still KU fans and because he grew up in Lawrence, he was at least a little familiar with the Jayhawks prior to arriving at the Final Four.

He said he found it funny that, under Williams, it was North Carolina that was known as one of the fastest teams in the country year in and year out, and now the Tar Heels will be facing a team that plays just as fast for the national title.

“I know they’re running well,” he said of Self’s squad. “And they shot the ball awesome tonight. It’s going to be a great game. The biggest thing for us is bouncing back from the emotion of this game.”

Now that the stage is set for another Kansas-Carolina showdown — this time on the biggest stage in college basketball — Frederick was asked what he thought his family might be thinking heading into Monday night.

“Obviously, my whole family loves KU,” he said. “So I think it’s a win-win for them. It’s unbelievable. I don’t even know what to say. Wow.”